Bully, considered by many to be GTA but for kids, is a surprise release from Rockstar Games that changes up the usual violent setting of their games.

The script for the scrapped mission known as Rendezvous.

According to its ID, the mission would become available after Bait in Chapter III.

It involved Jimmy helping Lola to protect Tad from some greasers, while they try to get along with each other.

The script is really unpolished and it makes no use of any of the remaining quotes in the files.

The script for what seems to be a scrapped introduction to Chapter III.

It spawns Jimmy in his room on the second floor of the Boys' Dorm, and Justin, Pedro, and Trevor on the first floor, and makes them start conversing once Jimmy gets near where the stairs used to be.

Like 3_03.lur, the script is unpolished. It doesn't use any of the remaining quotes and will crash the game as it tries to load a splash screen texture that was removed.

Valid IDs that are registered within the game and therefore can be launched, but have no leftovers to do so properly.

Unique IDs mentioned by various leftover files that aren't registered at all.

Wrestling Class has 5 classes like all the others, but only its first two classes are used as part of Gym Class (1 and 3, respectively), as the others launch Dodgeball sessions.
However, Gym Class was originally just Wrestling Class. Wrestling1.lur still contains code for the remaining 3 Wrestling classes:

In this class, you fight against the scrapped student Bob, and are tasked with reversing three grapples of his, then defeating him.

The script for this seems to be incomplete since you automatically pass the class if the timer runs out.

Bob doesn't play the "knocked out" animation when you complete the class.

In this class, you also fight against Bob, and are tasked with defeating him.

In this class, you fight against Luis and are tasked with defeating him.

The intro features a unique camera angle that focuses on Luis as he plays some animations. The camera, however, is a bit too close to him.

The objective of this class doesn't have an apostrophe in the word "Let's".

An incomplete script for the scrapped Graffiti Clean-up minigame. It seems to be pretty unpolished, as the player isn't even given control.
Even then, without the Brush and the Graffiti to clean, this would still be impossible to complete.

Replacing the Snow Shoveling minigame's script is the only way to properly launch this, as they share the same data that determines which difficulty to set.
It's possible that Snow Shoveling was scripted on top of the remnants of this.

Pirate Vance is likely not the intended ped meant for the script. His ID probably belonged to someone else earlier in development.

This script, unlike Lawn Mowing and Snow Shoveling, uses "MS_PunishmentDetention" for its background music, instead of "MS_CarnivalFunhouseMiner".

There are valid IDs that are registered within the game and therefore can be launched, but have no leftovers to do so properly.

Unique IDs mentioned by various leftover files that aren't registered at all.

The unused Reversal power-up still mentioned in the instructions.
It never spawns as the script sets it a spawn rate of 0.

The script for this minigame gets Jimmy's coordinates when starting it.
If he somehow happens to be near the coordinates meant for the minigame's unused second blip, in Old Bullworth Vale Gardens, it will take place there.

Every coordinate in the minigame with the exception of the camera has an equivalent of it meant for this location.
As the camera doesn't, and as such is still on the school campus, in the video here it is prevented from changing.

Unknown. Might have been related to the scrapped bike customization system.

When set to True for a bike, it freezes its state, which also makes the player unable to get on it, as if it was "locked".

When set to False, it unlocks the framerate of the game.

Breaks some of the in-game QTEs, making them much harder, and speeds up some scripted camera movements. This is technically used after the Boxing Minigame, but is set to True, even though it's never set to False to begin with.

Similar to the previous one, but doesn't seem to work.

An unused camera preset for when riding vehicles.

The camera tends to follow Jimmy from the same perspective, rather than trying to always face his back.

An unused camera preset meant to be used in Stronghold Assault.

Its purpose is unknown. 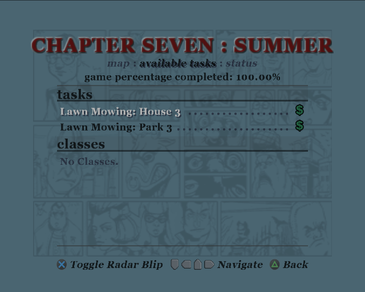 ID 6 is an unused chapter. When switched to it:

The game has a full 24-hour time cycle, even though Jimmy normally passes out at 2 AM and wakes up at only 8 AM. It may have been possible that Jimmy was supposed to stay up all night, and do some odd jobs, much like the Grand Theft Auto games.

It can be seen via a certain glitch (though it cannot be done in the fall season), via modding, or, alternatively, via the following codes that prevent you from passing out at 2 AM.

Additionally, while not unused, the Hurricane weather can only be seen during the Snow Shoveling minigame in Chapter III, with snow. Its rainy variation is never seen.

All Chapters' timecycles and weather variations:

effects.dat in the game's Config folder contains Glow Effects settings for some of the Areas, but the following are disabled:

Additionally, there are settings meant for the scrapped Boys' Dorm's bathroom, and the removed Island 3 Area. 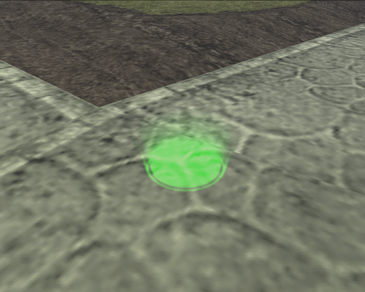 ID 12 is an unused green version of the ground blip.

This was likely meant for Jobs, but those recycle the minigames' blue corona, instead. 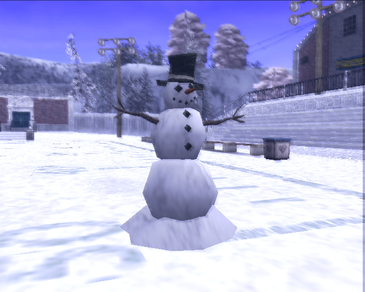 The 14 snowmen that spawn at the beginning of Chapter III are listed along with the other collectibles in Collectibles.DAT as "_COLLECTIBLE_SNOWMAN".

They might have been meant to be destroyed for a reward at one point.

Peds can enter a vehicle from the right side and be in a unique passenger state that is normally unused.

It doesn't seem possible for a ped to enter a car as a passenger if the driver is already in, but action nodes can be used to change the driver's state to passenger and have another ped get in as the driver. 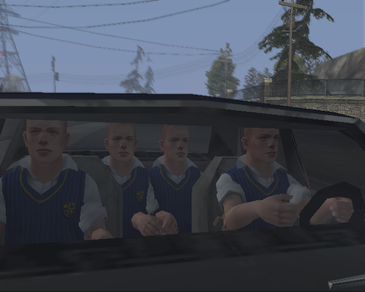 Additionally, the game allows for up to two more peds located on the back seats, though they are located too close to each other.
Results vary depending on the vehicle.

This texture belongs to the medicine you give to the hobo Handy during an errand. While used, the text on it is not able to be seen clearly:

There is an early screenshot displayed on the Game Boy knockoff that lurks in the Nerds' Hideout, albeit in a very low resolution.
Details like a slightly earlier design of the Bullworth students and the old walking style can be seen here.

The game in European regions is called Canis Canem Edit, so almost all instances of the game's title were changed to match.

The icons spell out "B-U-L-L-Y" in the US version, they were replaced with different variations of the Bullworth Academy shield in the European and Japanese versions.

This is most likely because you're still finding English words, rather than Japanese ones.

The Shop class mini-game bike wheel turning segment seems to have a slightly better stick controls compared to the American and European versions of the game.