Bully: Anniversary Edition is a rather ugly-looking and buggier mobile port of the cult classic, using the base of Scholarship Edition.

In BullyOrig on Android's patch OBB and in Payload\bully.app\BullyOrig.zip\BullyOrig on the iOS IPA, there is a file named jumptable.bin. Extracting this archive reveals 168 save files for every mission, class, and most areas in the game. These save files are compatible with both Anniversary Edition, as well as Scholarship Edition.

The soda cup on top of the "Burgers" fast food restaurant in Old Bullworth Vale is incorrectly textured. Its texture files are missing, and it seems to be using the same texture as the burger next to it. 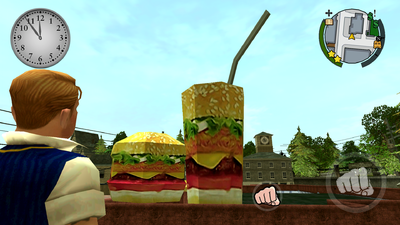