The Nintendo Wii release of Bully: Scholarship Edition was very close to being the best version of Bully. Too bad it still has weird oddities of its own. 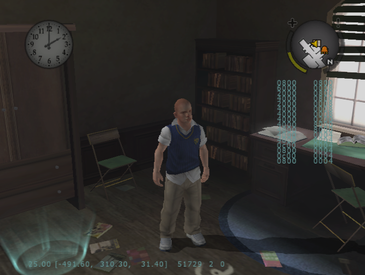 This option shows the current framerate, position, how long the game has been running for, and how many NPCs and vehicles are loaded on the bottom left side of the screen. 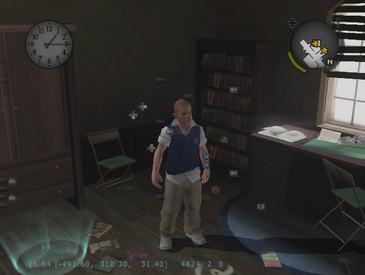 Shows the last 16 buttons that were pressed for both the 1st and 2nd player Wiimote.
This option has both a textual as well as a graphical mode (which still use the PS2 button textures) that can be toggled between each other using C + LEFT and C + RIGHT.

With this, Jimmy can knock out anyone with ease.
This option may cause several missions to softlock, therefore it has been made toggleable here with C + UP and C + DOWN.

Stay Up Past 2AM

This option is meant to make Jimmy invulnerable like in the PS2 version, however it seems to be broken, so its only function is to make sure Jimmy won't pass out when it is 2AM. 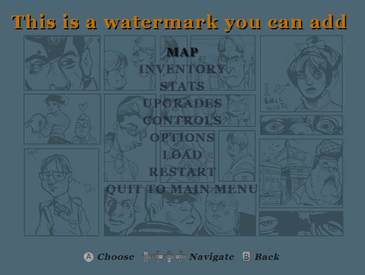 At the address 8062B920 for both regions, you can write any string in there that will display as a watermark on the title screen and pause screen.

A script for what seems to be an earlier, incomplete version of Mailbox Armageddon exists only in this version.
It crashes almost immediately, but Edgar can be seen spawned in front of Jimmy, instead of Clint.

Unique IDs mentioned by leftover files exclusive to this version.

An icon for a voice changer. It is unknown what this was intended for.

Changes from the PlayStation 2

Chemistry class has been changed to accommodate for the Wii's control scheme, but changing the input wasn't the only thing that was modified:

The poster's design was changed.

The pictures were replaced with old 3D renders of characters.

When getting the Cheerful Reindeer Sweater, the game will also reset the player's clothes to the school uniform, for some reason.

After the mission Nutcrackin' is completed, you are not given the Nutcracker Outfit.

At the beginning of the mission's cutscene, Pete is completely frozen, aside from his face.

Here's to you, Miss Philips

Ms. Philips' model is brighter (due to having twice as high vertex color values).

Showdown at the Plant

The pipe Jimmy is holding has been moved a bit.

Jimmy's default uniform uses an earlier texture that can be seen in pre-release media of the PlayStation 2 version.

The music for this class uses a higher variant of the BMX Park's tutorial music, instead of having its own theme like on the PlayStation 2 version.

Jimmy's picture in the Yearbook recycles Earnest's body, for some reason.