HAL's Hole in One Golf

HAL Laboratory's second take on a golf game for the SNES! 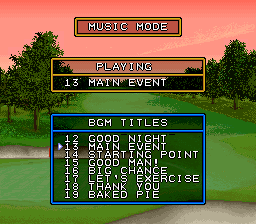 Doing this will cause your caddy to be replaced with... well, you'll see:

The US version, which allows for longer player names, checks for the single string "ANOTHER" instead. However, the US version removes the advice feature entirely, so this doesn't actually do anything (though you will still be prompted to enter your name a second time).