Heavy Unit is an R-Type-type game with a transformation gimmick. The titular "Heavy Unit" can switch between a smaller to hit but offensively weaker ship form, and a bulkier and more powerful mech form.

There are two hidden credits in the game ROMs. The first is in the main CPU at address 0x68:

S. "To-Y" Igarashi is listed in the credits in the software section. Note that the game runs off three Z80 cpus, so it was apparently converted from a 68K source.

The other message is in the slave CPU, starting at 0x9:

Y. "Uai" Yamauchi is also in the sofware section of the credits, but F.Komori is mysteriously absent.

Kaneko's logo usually appears at the end of the credits, but there are also graphics for Taito (who published the game) and Electro Design, a company that didn't actually publish a game until 1996!

There are also smaller and larger versions of each logo. Have to have all of your logo bases covered.

This is what looks like an earlier shield animation for the ship-type Heavy Unit. In the final game, the ship just uses a scale-down version of the robot-type's shield. One of the shield frames is cut off at the bottom, so there might have been other frames for this animation that were overwritten by other tiles.

These are two alternate designs of the pellet-shooting orbs found throughout the game.

Three of the enemies that use the "tiny enemy" palette are unused, only one of which -- that red scorpion-dragon thing -- has more than one frame of animation.

These laser turrets, meant to appear in Scene 1-1, were replaced by the more intimidating flamethrower cannons seen in the final game. 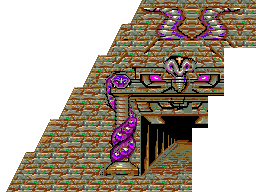 While some of this large temple is seen in Scene 1-2, a large portion of it (including the entire temple door and most of the large purple snake on the left) is out of the player's view.

An odd-looking enemy (But they all are, really), this seems to be a beetle with a human-like face and a cannon on its back. The palette for this enemy is loading at the transition from Scene 2-1 to Scene 2-2.

So it turns out that those red things in bubbles at the end of Scene 2 are actually embryos. This animation shows one quickly developing into a fish monster which has its own unique death animation. In the final game, the animation is frozen at the first frame.

Part of an unused concept for the wasp enemies in Scene 3. It looks like three different looking rocks would fall down from the ceiling, with one of the rocks being the wasp in disguise. The wasp robot would quickly transform and attack the player.

The hopping enemies in Scene 4 have a more organic death animation, but in the final game they just use the generic explosion sprite.

The torso robots in Scene 4 have three unused animations: One for flying up, one for turning, and one for a punching or projectile-launching attack.

This grotesque hulking mess of a boss got pretty far into development, but doesn't seem to have been coded. Its palette is loaded during Scene 4, so that's probably where it would have appeared before it was replaced by Hard Shell II.

It's made of four separate objects: The body, the hand, the lightsaber / sword, and what seems to be a shoulder part. There are also small projectiles that match the angle and color of the sword. 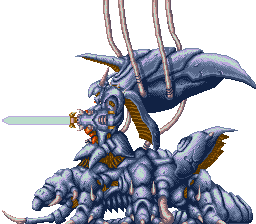 Here's a mockup of how it would look properly assembled. It's very likely that at least part of the body's sprite would be off-screen, since the entire sprite matches the resolution of the screen (256 x 224) exactly.

It's a shame this was cut, since there was clearly a lot of work put into it, but that's one of the perils of game design, one supposes.