In assets/Common/china_temp_dir/ui/cocosstudio/ contained two folders, elements and game, for unreleased Chinese graphics. The china_temp_dir folder was removed in the 1.3.0 update.

A raindrop texture, it's unknown what this is.

Hidden inside of the tuning parts spritesheet is a red magnet. Possibly an older version of the magnet, which is yellow in the actual game. also it is named magnet fuel in the files.

languages.png, along with a corresponding plist file, existed in assets/Common/textures/. The image contains the Union Flag and the flag of Finland. They were removed in the 1.3.0 update.

Two graphics for a pickup tire and a pimped tire appeared in the 1.2.1 update but were later removed in the 1.2.2 update.

The Super Diesel truck was originally going to be a bit squished, rounded, and have a step for detail. The final release extends the body a bit and removes the step. The exhaust also went through some touches, too.

The Tank was originally going to be gray and a bit taller. When the vehicle was officially released in 1.3.0, its palette was changed to green instead. In addition, before the Tank was released, a red and green variant existed in two folders called green and red. They were removed due to the in-game engine capable of changing the default's palette instead. Oddly, once released, the folders were renamed to tank_hue_blue and tank_hue_green. The only colors available are green (default), red, and blue. Red is located in the tank_hue_green folder.

Low quality sounds that may have been used for testing the cars' engine and turbo. They were removed in the 1.3.0 update.

english.po in assets/Common/translations contains unfinished licensing information. This can also be found in the first game.

This is a blank text file stored in the files.

Stored in assets > common > shaders is a unused script near hovercraftskirt.vsh.

In english.po there is a note saying "#. DO NOT TRANSLATE IN ICANLOCALIZE. Additional description in GDPR popup for iOS14 users when AppTrackingTransparency is enabled."

The reindeer in the X-mas Cup image was replaced by a snowman.

Fingersoft's logo was added to the loading screen and the background was edited to fade out at the bottom. 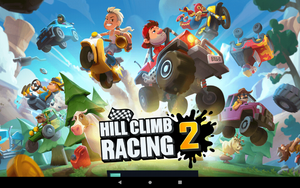 The background is different.

In the files, there are cars not used.

This is used in the beta version but no longer is in-game, but it's leftover, there is also sounds for this car in the game's files.

A unused car that looks a little like a caravan, it isn't in the beta version.

There's a car named this in-game, but this one is not used, the difference is that it is 3D instead of 2D.

There is a cup named Broken cup which is very rare to find on weekly or daily challenges, The stages are Mud and stuff and rage of crates, since it has the name broken in it, it means it's broken, also the stages are a lot of things to break, it's also unknown what the thumbnail was for this, and it also got removed.

Inside assets > common > ghosts > references contain 14 test areas which cannot be in-game, all of them are for max and min vehicles and the filenames of them are .dat.

in old versions, she used to not wear a helmet and she was a lot easy to beat

This boss is not used but in old versions, it was used, this is Bill from Hill Climb Racing.

A boss named Nerd was in old versions, but got removed.

This is used in old versions, but got removed.

Chests that were removed.

This is in the very old version when chests were 2D, it had this chest, but was removed for unknown reasons.

In the files the vehicles has these names, meaning this is a name scrapped during development.