There are also fragments of old in-game text messages left in some maps that can be seen in a hex editor. Many of these seem to be version/comments on the status of the map:

All the game's maps are given a number. Checking the maps folder reveals the following levels were cut from the shipped game as a map with the respective number does not exist:

The development materials include these missing levels. Decompressing the locations.dat file and viewing it in a text/hex editor shows that the map descriptions for all cut levels are actually still present in the final game.

This section makes most sense in comparison to the large number of items that were present in the demo version's code, laid out below. In the final game the vast majority of those items are completely gone, either seemingly deliberately cleaned up and removed, or simply replaced with other items (many of the melee weapons were replaced by the sentry guns and grenade launcher and grenades, as an example). All unused items in the final game code have no artwork anymore, no description, and most no longer even have the item title.

The only surviving unused item from the demo version in the final game is the D.T.S Ultra Prototype. This still works perfectly and fills in the complete map of the current floor for whichever character carries it. However it now has no icon in the inventory so will appear as a different kind of corrupt graphic (usually a series of straight white lines) depending on who carries it. It still has its name present, unlike any other cut item.

Analysis of the released source code shows there are still item types defined for the special plot items - Digital Camcorder, Satellite Uplink Card, and Portable Databank - but their item entries have been purged and just appear as unnamed junk now. The exception to this is the Digital Camcorder, which while it has its icon and name removed, oddly still has its description text intact. 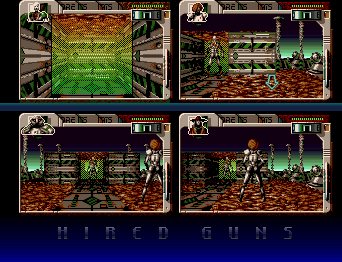 There is an used map block type in the game called "Fitness Boost". Testing reveals this was designed as a special map block consisting of a field that characters can walk into to restore their health (or Fitness as it is called in-game). If placed in-game, the block looks identical to an exit. Using it plays a truncated version of the teleport sound, and flashes the screen green as per using healing items. Characters cannot walk inside the field, it acts like a solid block (although it can be seen through) and heals them when they bump into it. There are no Fitness Boost blocks in the final game's levels, but the block can be used in custom levels by adding one in the map editor. However, the editor lacks the needed control to set the required healing value of the block. If set by editing the map file in a hex editor by hand, then the block will heal all characters that bump into it by the set amount. Characters can heal themselves against the block indefinitely, it does not seem to run out of charge. There is a slight bug where if a character bumps into the block at full health, the green healing effect will not toggle, and in fact will play when the character steps away from the block instead.

A port by Visual Sciences. While the DOS version runs in a 256-color screen mode, it's overall inferior to the Amiga original. Differences include:

Graphic artist Graeme Anderson on the PC version's redone character graphics: "we took the Amiga images and merely took advantage of the availability of 256 colours. I don’t think it made the game look any better. I think I did big colourful boots on one of the characters and it made him look like he was going to a disco. I only added colour to a few things because of lack of time, otherwise the environment graphics would have been improved".[1].