Hover is a HTML5/WebGL remake of the 1995 PC game Hover! with modern graphics, three selectable hovercrafts, and multiplayer mode. The game also contains an Easter egg that allows you to play Level 1 of the original game by typing "bambi" at the main menu.

Accessing the game from http://hover.ie/#debug will start a single player game with a FPS counter at the top of the screen.

A message for getting a tied game exists in the game's code. However, there is no time limit even in multiplayer mode, so it is impossible to end a game in this way.

The original game played a "Ping" sound when an enemy saw the player. This remake no longer does, but the sound effects remain.

This winning screen doesn't appear as there is only one level in Retro mode. 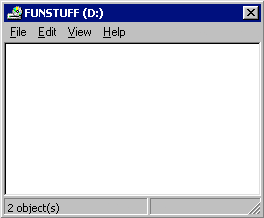 Folder view for "FUNSTUFF", which would have been placed on the desktop. This was the name of the folder on the original Windows 95 CD that contained Hover!, as well as some bonus videos. In the final game, the icon is nothing more than a hyperlink to Microsoft's SkyDrive.

Two AVI video file icons that would have been placed in the "FUNSTUFF" folder. On the original Windows 95 CD, these files contained music videos of Edie Brickell's "Good Times" and Weezer's "Buddy Holly", respectively. 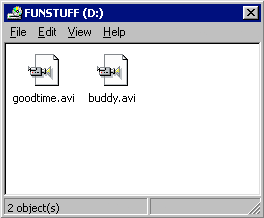 Mockup of "FUNSTUFF" disc with the two AVI files.

The following icons have white filenames, so they were most likely intended for the desktop.

A readme file with no file extension. What it contained is anyone's guess.