Inherit the Earth: Quest for the Orb

Just outside the first room of the game, a debug item can be found on a table, obscured by a canopy. The only indication that it's there is a subtle change in the status bar when it's moused over (the active verb is nudged slightly to the left by a space character, and the 'look at' verb highlights).

Once this "magic hat" is in the player's inventory, they can use the 'use' verb on it, then type any number followed by the enter key, to travel to the room internally assigned that number. (If there is no room corresponding to the entered number, the game will crash.) 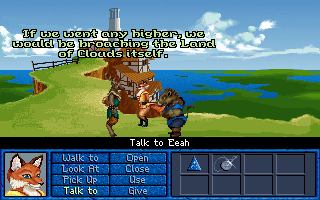 Certain screens accessible via the debug item cannot be reached normally during gameplay. These include 'daytime' versions of screens normally seen only at night. At least one of these screens (#6) includes written and recorded dialog triggered by speaking to Okk and Eeah that cannot be heard during normal gameplay.

Several development leftovers can be found in the Mac version. 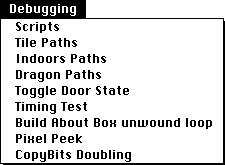 cicn 128 is a strange variation on the debug alert's icon: a skull speaking a moldering letter C.

ALRTs 261 and 262 refer to monochrome support not present in the final game.

The "Growf!" creature from Quintette and PGA Tour Golf—now in color—follows Robert McNally to another project. 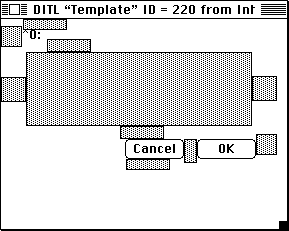 The list of error strings making up ERRS 256 ("Out of memory", "File not found", etc.) contains this curious entry: