Jazz Jackrabbit 3 was set to be Jazz's first 3D game. featuring the return of Spaz and Lori as playable characters plus the introduction of Eva's cousin Razz, who would help create various items for the team.

The game was about 25% complete, but the developers were unable to find a publisher, and eventually the team went their own separate ways. An alpha build dated November 17, 1999 was eventually leaked to the internet.

Pressing the tilde key (~) will open up the Unreal console. This uses the original Unreal Engine commands, though not all of them work. 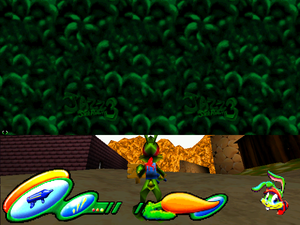 One of the render modes makes it much easier to view areas darkened by shadows. 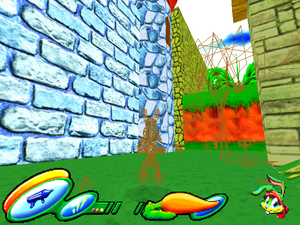 The largest level in the alpha demo, matching some concept art. It features a small village with two residents, a huge waterfall, a cave, a cannon atop a beach, and an underwater city, complete with sunken ship. The level title is 'Lair of Wind'. Several collectibles are scattered around the level, and enemies also populate it.

Lair of Wind requires a patch to work correctly, otherwise the crankshaft won't spawn on the beach and the water won't function, causing Jazz to fall through to the bottom. The small ponds in the caves will work as normal regardless.

It's also possible to climb to the top of this level by running up the waterfall from the top.

Two pieces of dialogue explain what was going to happen in this level.

A small level where Jazz starts off inside a small space shuttle with some boxes. A small area leads outside to a forest with a large mushroom in the center, suggesting that perhaps the rocket would crash here at some stage.

A very rough boarding level, as the filename implies. Jazz can get on and move around the empty level with it. The center of the level features a checkerboard texture, and the level ends abruptly. There are no warps anywhere in the level.

Same as JBoardin, only Jazz dies upon pressing any button. 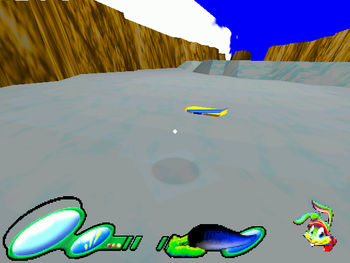 A medium sized area with a lake in the center, and a small raised platform where the character will stand. 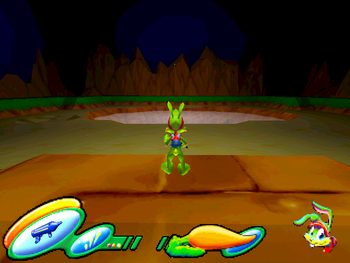 There are many changes between the two. Many of these are texture changes, but some of the more significant changes include the lack of items, missing NPCs, placeholder textures, no fire effects, the carrot shop not having an entrance yet, and the entrance to the canyon being completely different. You can't enter the canyon though, as it leads to a dead end. 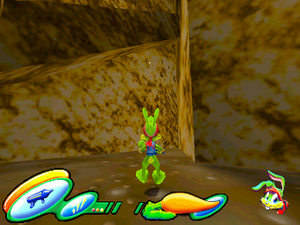 This level also lacks any dialogue tags, and all of the warps are similarly missing, as is the music.

This level is an early version of the Basement.

Much like Dean Village, this version lacks all of the collectables, the enemies, the music, the lighting effects and many other items. Some of the areas blocked off in the final can be accessed immediately in this version, and no switches are present.

The level ends just before the first valve when Jazz enters an invisible warp back to the water, yet the passage he should enter from here is replaced with a brick wall.

This level cannot be loaded, as it lacks a Player Start.

What could potentially be an alternate title screen, JJ3D is a level that can't actually be played. When run, it shows a gun at the top of the screen and an auto-camera pans around the level. It starts off by focusing in on Jazz standing on a hill with a flag, and pans a bit before leading downwards and exploring the ground level, where a few enemies are wandering about.

SunSong is not used at any point during gameplay.

JazzMultiplayer.u contains several messages and comments. Many of them relate to a ship which doesn't seem to exist anywhere in the game currently. JazzRace.u also contains the code for the ship. Given that a lot was planned for multiplayer, it's likely that this was another mode of play.

These notes relate to other parts of the multiplayer.

These notes can be found in CalyGame.u.

A message left for the JazzIntroMenu:

In Spaceship, Airship and HangGlider (all of which are missing from the demo):

ReplicateGameEvent has a bunch of notes:

Timed Effects has these messages: 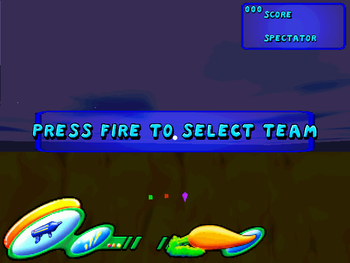 A spectator mode for multiplayer can be accessed. The spectator can travel anywhere over the map, even out of bounds. The method for accessing it is rather unstable - the player must start a multiplayer game without selecting a character. However, this doesn't always work, and sometimes the spectator mode is activated instead of the multiplayer battle. The option to be a spectator is never given. 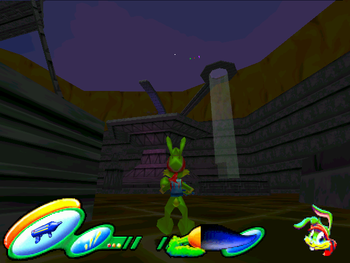 Three crystals can be seen floating around the rocket, but you can't reach them.

There are textures for Pyramidus, a level not included on the demo, and the whale, which would have been where Jazz rescued Razz ma Tazz.