From The Cutting Room Floor
Jump to navigation Jump to search
This page contains changes which are not marked for translation.
Other languages:
English • ‎italiano • ‎polski • ‎한국어

Ever wondered what Sonic the Hedgehog would be like with a gun? Jazz Jackrabbit comes pretty close to that.

Found in LEVEL0.050. A joke that was also carried on to Jazz Jackrabbit 2 (though actually used this time). Likely referencing Craig Lafferty, PR Manager at the company. 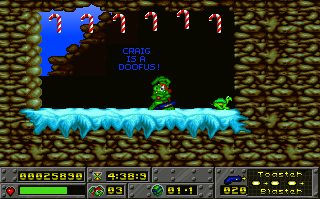 It is used in a hidden area of the second level of "Holiday Hare '94" near the end, along with a few little turtles. 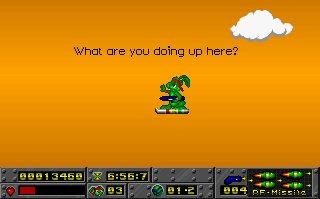 Seen in Turtemple stage 2 (LEVEL0.009). You can find it by going to the one-up outside of the main structure and flying left after you get the hoverboard. It's just to the left of a floating hidden cache of Launcher ammo.

LEVEL3.020 contains an early version of a Diamondus level. It will crash the game if forced to load, but it can be opened in JCS94.[1] The level contains some test code and references various things that have since been moved or changed, hence causing the crash. It is possible to repair the level and get it to play normally.

LEVEL2.002 is the Medivo secret level, lying unused and containing nothing but springs and a void.

LEVEL7.030 is a version of Diamondus 1 but using the Exoticus tileset (the tileset which is internally BLOCKS.030).

An unused sun sprite belongs to the Muckamok level. It is not animated, but has four frames. The sun can be restored to the level and is intended to keep the same position relative to the camera. Because of how the game renders, moving objects need four slightly offset frames to appear smoothly, even if not otherwise animated.

Several levels have messages hidden outside the level boundaries... Most of which are definitely not meant to be seen by the players. Shown from the last platform the player can reach.

Scraparap 1 has a large off-screen area of unknown purpose.

Many of the cheat codes in the game are jokes or references to the creators.

The APOGEE cheat is a joke that makes Jazz Jackrabbit run in 16 colour mode at half speed, which it calls "apology mode". Apogee Software, now 3D Realms, were competitors of Epic MegaGames at the time. Entering the cheat again switches back to normal, aka "cool mode."

The APOGEE cheat toggles between these modes

The MARK cheat will kill Jazz and is a useful debug feature if Jazz has gotten stuck. Mark Rein was a producer.

The ARJAN cheat will display "HAHAHA" as text. In later versions, it will shake the screen. Arjan Brussee was the lead programmer.

The TIM cheat displays "AWESOME" as text. Tim Sweeney was a producer and, allegedly, a dork.

This is the original floppy disk release of the game. It contains episodes 1 to 6. This version cannot play the CD levels developed later.

This is a rare version that is not well documented. It has only minor changes compared to Version 1.0. This version is missing the "APOGEE" cheat.[2] Subsequent versions also lack this cheat.

In every version but 1.1, cheats are accessed by pressing P then backspace. For some reason, Version 1.1 requires you to press P, backspace and then DD as a prefix to the cheat code.

For example, the code to activate the airboard is cstrike. In 1.1 it becomes ddcstrike.

The 1.2 versions are the CD release of the game that added episodes A to C and Z (the bonus levels). The intro has been changed from Jazz on a black background, to Jazz dressing up as superheroes. The bird helpers shoot larger pellets than they did before. In Dreempipes, the water now rises faster.

Both 1.2 versions introduce significant bugs to the original 6 episodes. Which bugs appear depends on the version. In both of these versions, the Medivo 1 airboard ditch is broken. The Jungrock flowers are no longer bouncy. Most significantly, the Marbelara secret level cannot be completed without cheating, because the invisible spring does not work.

1.2 "Good" is believed to be the earlier of the two versions marked 1.2. It is dubbed the "Good" version by fans as it has fewer broken levels (only Marbelara Secret, which is optional). However, it still has issues of its own. The Lagunicus Boss bug is unique to this version. In the Lagunicus Boss level, the game uses the weapon that is one slot ahead of the one you actually have selected. 1.2 "Good" is also notable for having a longer version of Tubelectric 2's ending section. This is thought to be a beta version of Tubelectric 2 released by accident. 1.2 "Good" has A-C levels which are harder and seemingly less polished. Deserto 2 is particularly hard as it is missing any health restoring carrots. Ceramicus 1 has a glitch that can get you permanently stuck in the ceiling.

1.2 "Bad" is so dubbed by fans because Tubelectric 2 and Orbitus are greatly flawed in this version. Tubelectric 2 has a hidden spring at the beginning of the level which is non-functional in this version. It can be passed only with difficulty by pulling off a precise jump. Orbitus should have bouncy floors, but they are non-functional in this version. This would render Orbitus 1 impassable, but 1.2 "Bad" also breaks the airboard ditch in Orbitus 1, allowing the player to complete the level using the airboard. The Turtemple 2 and Pezrock 2 airboard ditches are broken by this version.

The better balanced A-C levels in 1.2 "Bad" are the ones retained for 1.3, the final retail version. 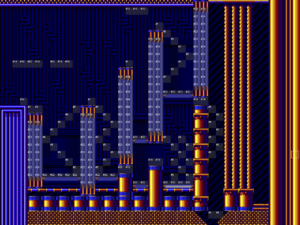 The problematic area of Orbitus 2. The opening on the right is trivial to pass in 1.0, but in 1.3, this requires very precise movement to pull off.

This is the last official version of the game and also the version re-released by Good Old Games in November 2017. It adds episode X, Holiday Hare '94.

1.3 fixes Marbelara Secret and the Jungrock flowers. Tubelectric is back to its original state. However, 1.3 disastrously breaks Orbitus 2 due to enlarging the hitboxes of the bouncy floors. This makes the level extremely difficult to complete without cheating. 1.3 retains the broken Medivo 1, Turtemple 2 and Pezrock 2 airboard ditches, but Orbitus 1 is fixed.

The shareware version of 1.3 uses the Exoticus level soundtrack for the bonus levels, something none of the other builds do.

In October 1995, Holiday Hare '95 was released, the last update to Jazz Jackrabbit.

None of the known versions of the game are able to play all levels without glitches. Fans have been making efforts to patch 1.3 into a more functional state, particularly in regards to the nearly impassable Orbitus 2 level. [3]