Kabuki Quantum Fighter is an NES game that involves hurling quantum formulas at your opponent.

Just kidding! You actually whip enemies with your luxurious red hair. For reals. 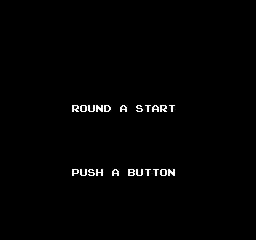 To activate a level select, press the following on Controller 2 at the title screen: A (×8), B (×4), Right (×16). When the "ROUND 1 START" screen appears, you can press Up or Down on Controller 1 to select your starting level. There are 256 level numbers to choose from, but everything above C will freeze the game.

This also activates a debug mode of sorts. During game play, Up and Down on Controller 2 can be used to alter the player's chip levels, and pressing A on Controller 2 will skip the level. 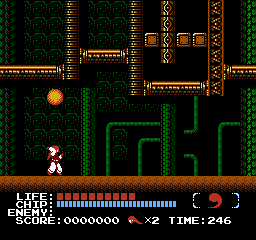 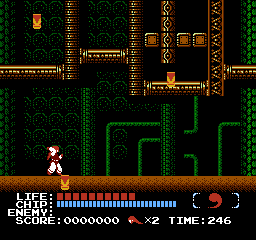 At the cost of a whopping 16 chip points, this unfinished sixth special weapon sends an orb straight up into the air, creating a rain of glitched projectiles (the red/orange shapes in the right image). This weapon has no associated sound effects, and does not hurt enemies. It may be enabled by setting $00D0 to 07. 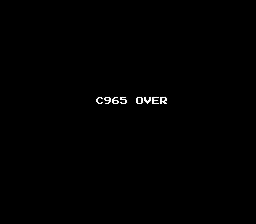 This enigmatic screen is stored alongside the GAME OVER and TIME OVER screens, and behaves identically to a TIME OVER when activated. No idea what this could have possibly been used for. 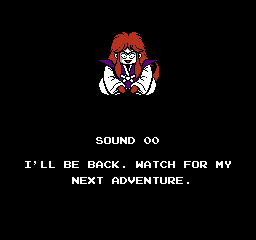 Press B at the end of the credits for a sound test screen. In the US version, Sound Test can be accessed at the game start. When the HAL logo animation stops, press Select + B + Down on Controller 1.

The Famicom version is actually a follow-up to the 1990 Japanese film Jipangu (AKA Zipang). The NES version removed a lot of these influences so the game can stand alone as its own work. This includes changing a lot of the closeup graphics and the storyline, although there were other unrelated minor differences as well.