A shoot-'em-up starring a prepubescent girl in a Playboy outfit who fights mythological Japanese creatures and the U.S. military. Inexplicably, it actually made it out of Japan uncensored ... mostly. Good thing, too, since it's a pretty fun game! 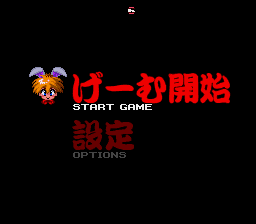 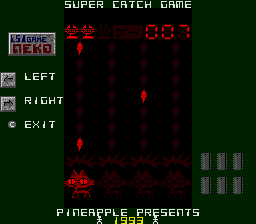 At the main menu, press one of the following button sequences, depending on the game's region:

Start a new game to access the "Super Catch Game" minigame. It's a parody of vintage LCD games; the goal is to catch as many of the falling objects as possible.

The game's localization is very low-effort; most non-essential text and dialogue was simply cut from the game rather than translated, and the Western releases don't even bother dubbing anything except the cutscenes. 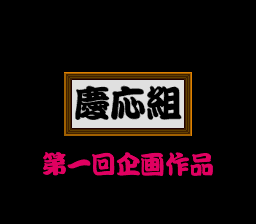 This splash screen proclaiming the game the first in the Keio series shows up after the Victor/JVC logo in the Japanese and European releases, but it was removed from the U.S. version.

The three character profiles displayed after the first demo plays were reformatted and rewritten for the international versions. In a feeble effort at censorship, the Western releases claim Rami is 20 – laughable, since anime girls stop aging at 16 (though, she's actually 14 in the Japanese game), and it directly contradicts Spot's profile that they were "raised together"). Also, Spot's Japanese name is Pochi (ぽち), a very common dog name in Japan. 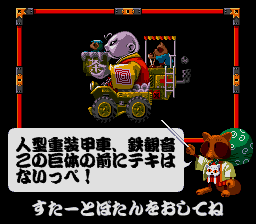 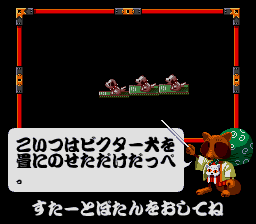 While the international versions just repeat the character profiles after every demo, the Japanese version actually has two different "tutorials" hosted by Dr. Pon that briefly overview the enemies for the first and second stages. 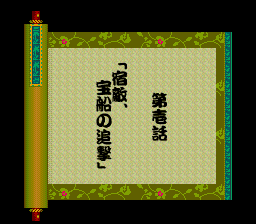 The Japanese version displays a title card before each level, complete with a little animation of a tanuki unrolling a scroll containing the text. These were cut from the Western version.

The game's title logo was removed from cutscenes for the U.S. release, though oddly it remains in the European version.

Additionally, the Japanese cutscenes feature some extensive monologuing from Rami; the Western versions only dub the very end, announcing the name of the next level and instructing the player to "push to start!" (even though the level begins immediately regardless).