Kick Master is an obscure game where you kick the butts of your enemy.

Found at the end of the title screen graphics. Kick Master was originally to have been published by Taxan (Who had published most of KID's titles beforehand); however, the company stopped publishing video games before the game was complete, so Taito stepped in and published it instead.

This KID logo (Kindle Imagine Develop, the game's developer) is found at the end of some cutscene graphics. A slightly bigger version of the logo can be found in Isolated Warrior. 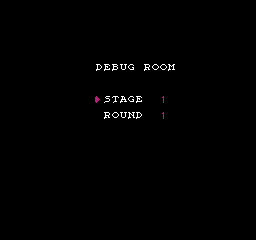 This is actually a stage select where you can select the stage and round you wish to begin on. Press Up and Down to switch between the two options, Left and Right to choose your stage/round, and A to select it.

This password is a reference to Taxan producer/designer Ken Lobb. 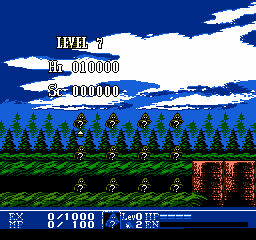 Starts you at the first stage, but if you press Start to pause the game, then press B, you'll go up one level! It goes from 0 to 7, then wraps around to 0 again.

This password is a reference to Low G Man, a previous NES game developed by KID and published by Taxan.