King of the Monsters 2 (Genesis)

King of the Monsters 2 for the Genesis is very different from the original version, discarding the beat-'em-up aspect in favor of playing like a fighting game. 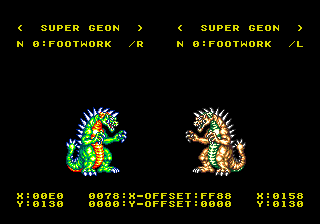 At the Sega logo, press Up, Down, Up, Down, Left, Right, Left, Right on controller 2. A sound effect should play and the "2" on the title screen should be reversed. You can then select "DEBUG MODE" at the main menu.

Music that is not used during gameplay can be heard in the sound test menu. All three are remixes of songs from the original Neo Geo version.