Kingpin: Life of Crime is a first-person shooter set in a 1930s-inspired world. You are a generic thug beaten up for an unspecified slight against a local crime lord. In revenge, you decide to murder every last crime lord in the city (up to the titular kingpin) while liberally ripping off Pulp Fiction and getting that fuckin' money along the way.

Several of the game's staff would later be recruited to make Half-Life 2. Their influence is readily apparent when looking at early HL2 development material, which is very similar to Kingpin.

The game's icon graphics contain an icon for a sniper rifle weapon. A sniper rifle cannot be found in the final game. In fact, this graphic is the only trace of it ever existing.

This weapon would apparently use a unique ammo pool, as a graphic for its ammo also exists.

A graphic named "temp" can be found, showing a skull with two guns behind it and the word "temp" underneath it.

Items with the Temp Graphic

The icon graphics also contain copies of the temp graphic with various names. Most of these appear to be earlier versions of existing items, but there are some that hint at items and weapons that were removed from the final game.

Three modified versions of the generic key graphic with "A", "B", or "C" in the lower-left corner.

Head.tga, found in the menu and HUD graphics, is an unused side view of the head shown when interacting with NPCs.

The folder containing the Pipe's model, along with the Pipe's model itself, is named "blakjack". This suggests that the Pipe was a blackjack (baton) at one point in development.

The game contains several partially-removed vehicles which can be accessed with the "g_vehicle_test". By putting 1, 2, or 3 next to "g_vehicle_test" and loading a level from the console, the player can "drive" various vehicles. In general, their physics are what you would expect from a vehicle; backing up is slower than moving normally, and it takes a little bit of acceleration to hit max speed.

All vehicles will play a looping idle sound that sounds like a motorcycle and will play a revving up sound when moving.

Weapons can be drawn in vehicles, but the first person graphic will not appear. 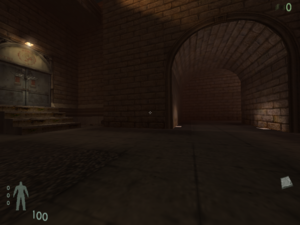 Vehicle 1 lets the player go extremely fast if the forward key is held down and there's enough room to really accelerate. The camera is placed lower to the ground than normal as well. 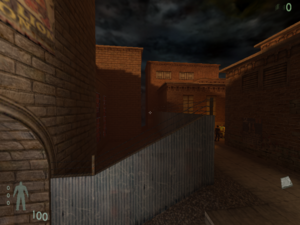 Slower than vehicle 1, but allows the player to fly by pointing the mouse in a specified direction, then pressing the forward key. It's similar to the physics used when in noclip mode, but without the ability to clip through walls. It takes longer to hit max speed than with the other vehicles. 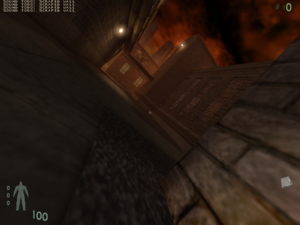 Vehicle 3's speed is a little faster than 2's, but not as fast as 1's. It is similar to 1, but the graphics will be warped a bit when taking corners.

Interestingly, the game will show messages in the upper-left corner, showing various sounds that should play when the player collides into something. This is the only vehicle that does this.