LISA: The Painful RPG is an adventure RPG by Dingaling Productions, LLC. It is the sequel to LISA: The First, an adventure game by the same company.

Various unused enemies can be found in the game's data. Out of the six, only two are fully coded.

It can only use a normal Shoot attack.

These enemies have no battle sprite, 100 HP, 0 SP, and 10 of every other stat. They all have a normal Attack skill and drop no Exp or items. Their placeholder stats may mean that they were cut in development. The only difference with them is the amount of Mags dropped:

In the game's battler's folder, Some of the Character file names have different names than they appear in-game.

Demon X and Buzzo have extra dialogue that will show provided you defeat them. Their stats make them impossible to defeat through normal gameplay and the player is expected to lose for the game to continue. However, they can still be defeated by using evasion-raising and poisoning moves.

If Demon X is somehow brought to 0 health, he says "You fucking cheated" before his death animation. Then, outside of battle, Demon X continues by saying, "You absolutely/ Are an asshole" and it's game over.

If Buzzo somehow reaches 0 health, he says "You made a big mistake. I'll end this world now." and it's game over.

There are battle animations for Brad's friends Rick and Sticky, as well as space set aside for Cheeks' animations, but none of said animations can be found. These are remains of party members seen in early trailers.

Sticky is shown swinging a stick in his two animations called Swing and Many Swing. These resemble animations for skills belonging to Queen Roger in the final version. 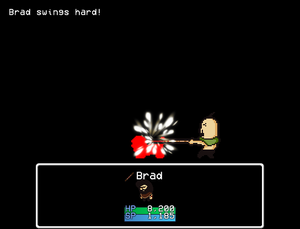 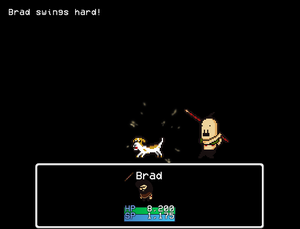 Rick has an animation for a boomerang throw called Boomerang in which he sports a pink shawl. Rick's animation and shawl strongly resemble those of Percy Monsoon, suggesting that Rick's design concept as a party member was instead used for Percy in the final version. 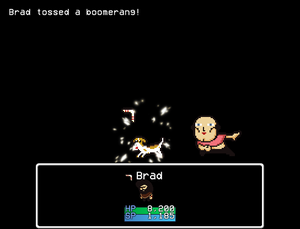