There are two different piracy flags in the game. The first is set when the "TAITO" part of the copyright string is altered: The game saves an encrypted version of the string to RAM and then performs a checksum on that string at the start of every round. If the string does not equal C0, the first piracy flag is set, triggering the following gameplay tweaks:

The second flag takes a lot longer to trigger. The subroutine at 0x2860 will gradually check 0x0000 to 0x1986 in the ROM, one byte at a time, with each byte added to byte A812 in RAM. The following actions will trigger this subroutine:

(If the user just leaves the game in attract mode, the subroutine will reach 0x1986 on the 28th demo sequence.)

Note that every time the player gets into a helicopter, the game checks if the instruction at the start of subroutine 0x2860 has been replaced by a RET opcode. If true, this second piracy flag will be set to FF.

Put the following codes in MAME's lsasquad.xml cheat file to set either of these flags: 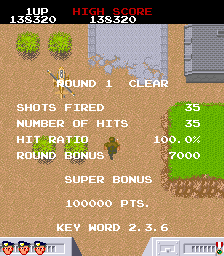 There are three different codes that the player can input during the end-of-round results sequence. Only one code can be used per round, and if the player makes a single mistake they'll have to wait until the next round to try again. Each code prints a special message at the bottom of the screen and gives the player a point bonus. 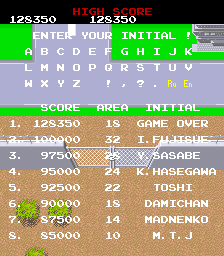 There are four high score names that trigger special messages: 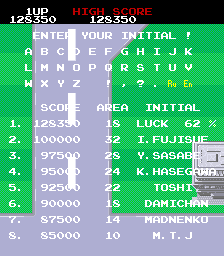 There's also a special case if the first three letters of the high score name are "SEX". The message is replaced with "LUCK X%", where X is read from RAM address A506, which is incremented every frame and ranges between 0 and 100.