Lands of Lore: The Throne of Chaos

Lands of Lore: The Throne of Chaos is a game where you find out that the big guy with four arms is a wizard, the witch that can transform into any shape chooses to stay ugly, and that Captain Picard was king way before Oblivion!

The game served as a successor of sorts to Westwood's first two entries in the Eye of the Beholder series. After the second game, they decided to make Lands of Lore, while a third game was butchered beyond belief by SSI.

An unused helm icon. All helms in the final game use a single icon.

A key probably forgotten by the developers of the game.

Possibly the old icon of the Writ of Passage, or a note.

The arrows are not separate items; they are instead automatically used by a bow. Perhaps the arrows were separate items in another version of the game?

A bottle containing an orange liquid.

A bottle containing a yellow liquid.

A bottle containing a green liquid.

Another key not used in the game.

A cloak, possibly the Whisper Cloak, which is given by the beggar.

In the game, Roland's Manor was already attacked by Scotia's monsters by the time you get to it. However, there is a screen of the Manor that looks intact. In the Lore of the Lands section of the game, there is a part where you see Roland's Manor intact, but it is in sepia tone. The colored version is never shown in-game.

Dawn is an important person in Lands of Lore, but she is not playable. However, it was intended that she should join your group at some point in the game, as she has some unused character portraits.

This music would probably have been used in Gladstone Keep, but more specifically at the beginning of the game. It is in the same style as the second theme of the Keep after the attack by Scotia.

With the help of a program to extract the graphics of the game, you can see text on the screen where King Richard is put in stasis after Scotia's attack. The texts describes when the king is there or not. 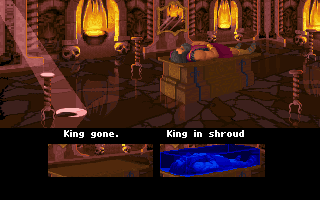 Lands of Lore has an impressive number of unused items.

This is the first item by default and is represented by a single mouse cursor. Throwing this item, a broken bottle is shown.

This is one of the arrows used by some enemies. It can do damage by throwing it at enemies.

A single arrow shot by enemies.

A flaming arrow shot by enemies. Crossbow "Valkyrie" use this kind of arrows.

Another kind of arrow, but bigger.

A projectile in the form of a shuriken.

Same as the previous item.

Some monsters spit these things.

Same thing as the previous item.

Contrary to what some may believe, this thrown item, represented by a large fireball, does no damage. This is the case of other items using traps visible in the game. This is the only item not using a real name.

This item is also one of the traps in the game.

A big ball with spikes, it is one of the many traps visible in the game.

It is an extremely powerful item. It uses the same projectiles as the ghosts on the third floor of the White Tower. When used on enemies, it deals a large amount of damage.

This kind of projectile does not seem to be used in the game.

As with "Dispell", this projectile does not seem to be used in the game. However, it is as powerful as "Pain" by using it on enemies.

Same as the other "Dispell".

Unused Areas in the Maps

Several locations on the maps are inaccessible. Some are even named with a colored square. The most surprising case is located in Yvel Woods.

There is a walled-off area in Cimmeria Level 2 containing a chest that contains the otherwise inaccessible Cloud ring and Great Bow "Darkness".

Timothy and Lora speak the same lines as the normal characters when items such as the Vaelan's Cube and the Whole Truth are unsuccessfully used, despite these items being unobtainable until long after they have left the party.

Early releases contain a game-breaking bug: Dawn's Key is irretrievable if the player surrenders it to Scotia when she is impersonating Dawn.[2] Later releases fixed this.