Lasabirdie: Get in the Hole

GET IN THE HOLE! The only thing more ridiculous than this game's name is how difficult it is to emulate it.

Normally, the game will refuse to boot if it doesn't detect the special golf club controller in port 2. However, since no emulators (currently) support it, this effectively makes the game unplayable through emulation under normal circumstances. Pro Action Replay code C17B2322 will bypass the controller check, allowing you to check out the basic features of the game (though playing an actual game of golf is still impossible, obviously).

The code is also needed for the rest of the things mentioned on this page, unless you happen to have one of the 3,500 or so physical copies of the game known to exist. 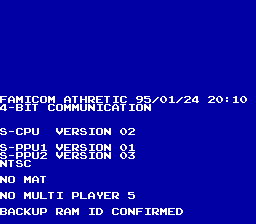 PAR code C16FE7EA activates a debug mode on startup, which shows the CPU/PPU versions and peripheral status (and refers to the game as "FAMICOM ATHRETIC", oddly enough). Other debug features can be activated by pressing either Left, Right, or R: 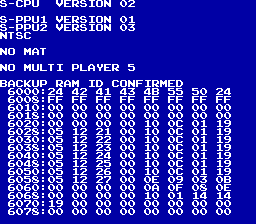 Pressing Left displays the current contents of save RAM. Pressing A or B will page back and forth 128 bytes at a time. 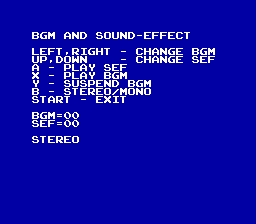 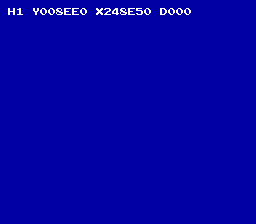 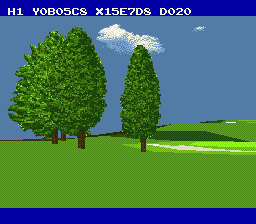 Pressing R will cause this screen to appear. The values of Y and X will constantly increase for a while, then a course background will appear and begin slowly scrolling to one side. 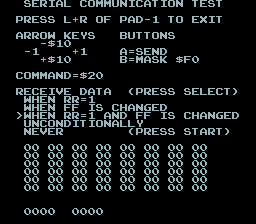 Holding down Select while pressing Start at the title screen will lead to this screen, which is used to test sending and receiving data between the SNES and the golf club controller.

Normally, the screen is completely black at this point because the game does not enable any of the graphic layers after printing the text (which may have been done as a quick and dirty way to hide the screen from players). The code C000B304 will force layer 3 on during screen transitions, making the test screen appear the way it should.

Note: In order to use this, the previous debug mode must also be enabled, or else the debug font won't be loaded and the onscreen text will be invisible, even when layer 3 is on.