Villain names were simpler back then.

Track 22 is unused in the arcade version. A slightly slowed-down version is used in the NES port as the 'Stage Clear' jingle.

Track 27 is used in-game for the name entry screen. However, only around 30 seconds are heard in-game -- The full track is approximately 1:51 in length! This was probably meant to be used as an ending track before being repurposed; the NES version had a completely different track composed for its ending.

Each version of the game changes the player characters. 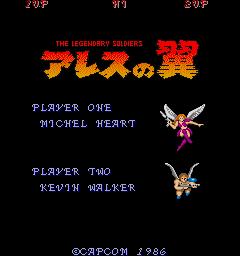 The Japanese screen has an additional screen during Attract Mode that introduces the player characters. These unique sprites can't be seen in any other version.

Here are some differences between US sets 1 and 2.

The ornament atop the dragon statue is much brighter in Set 1 than in the Japanese game / Set 2.

The design of the palace walls was changed in Set 1.