This is a sub-page of Luigi's Mansion (GameCube).

The door models used for door opening cutscenes contain a texture of Luigi's hand. Even though there is a reflection on the door knob, this graphic can't be seen.

Found in the newtime and 2dsub directories under the folder Kawano (named for Masahiro Kawano, another programmer), inside the files game.szp and game_usa.szp are the image files for the Game Boy Horror timer that was cut out of the game. These numbers were also used for the similarly cut heat meter. When the timer runs out at 6:00, it merely resets back to 0:00.

The border was at one time animated, as it once was a radar that could track the direction of nearby ghosts. The image files for this can be found in the newtime folder, like the Game Boy Horror clock. 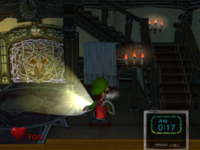 The clock radar can be viewed with either of the following Action Replay codes, depending on the game's region:

-Obake02
Leftover in the Obake01 (Gold Ghost) and Obake02 (Purple Puncher) folders are these two images, depicting early designs for the ghosts. These designs are either the same as or very close to the ones seen in the original Spaceworld 2000 trailer. While this blue ghost lacks a nose, the blue ghosts seen in the trailer have varying facial structures (ex: eyes are higher/lower), so it's possible this is just one of the variations created.

Leftover in another folder of game.szp and game_usa.szp are some unused dialog icons. There is an icon of Green Toad, an unused type of Toad. Mario's icon was probably planned to be used when he says "Get me outta' hereee!" at the Bottom of the Well, as an equivalent icon is used for that exact scene in the 3DS remake. The Gold Ghost icon may have been used with the unused intro text, or when the paintings were taunting Luigi in the parlor. Nana's could have been used when Luigi hit her with one of the yarn balls. 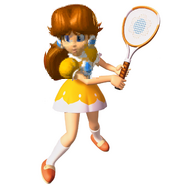 Found in game_usa.szp is an icon of Daisy, who doesn't appear at all in the game. This is a cropped portion of the official art of Daisy from Mario Tennis for the Nintendo 64, as it was one of the most recent images of her during 2001. The file was found in game_usa.szp in the folder kt_static; her graphic is called Test.bti. The icon was probably a test for the posters you vacuum off the wall, as it is grouped with the graphic files for the posters.

This unused eye texture is not completely unused, as an unused animation (see "Poisoned" animation) and an ending graphic uses this texture.

These renders of Luigi can be found in the files for the ending. The game at one point most likely had alternate endings. The Entries file in the CVS folder notes that these images were built a little over a month before the final game's release. 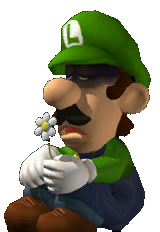 luigi_b.bti was most likely meant to be used when achieving the lowest possible rank. 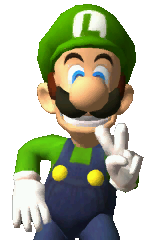 luigi_g.bti was probably meant to be used when achieving a good ending. Could have been for partially completing the game. 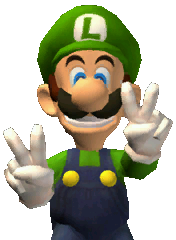 luigi_V.bti was obviously meant to be shown for the best ending, most likely after collecting everything.

Translates to "And... a present from the doctor!". The file, sosite.bti, is located in the Ending folder where all the ending and mansion rank graphics are stored. The file was removed in the European version, presumably being cleaned up during the addition of the French and Spanish localised ending graphics.

This creepy hand graphic named hand1.bti is exclusive to the Japanese version and is not only found in Game\game.szp\data\kawana, but also in its own archive called res_kwnx.szp in the Kawano directory. What "kwnx" stands for is unknown.

This texture of a GameCube is loaded with the scenes for bosses, such as Chauncey and Bogmire. It is likely a placeholder graphic for the trippy background, as it only gets used for a moment. Interestingly, the disc cover on the GameCube has a translucent portion, which was the original design of the console as seen in the Super Mario 128 demo.

Found in game_usa.szp\kawano\base\timg\gb_sight_ob_key.bti and gb_sight_ob_teresa.bti; as the filenames indicate, they could have probably been used for the Game Boy Horror's camera when scanning a chest/scanning a furniture which a Boo is hiding in.

Found in game_usa.szp\kawano\roomname\e_freez.bti. If using the Action Replay codes "Always Able to Move" and "Map Modifier", you can see this graphic on the Game Boy Horror. Note how the 'L' isn't capitalized; this was a very common trend to see in early footage and the E3 Demo. Most rooms had direct translations and were probably done hastily in time for the E3 demo. Seeing as they never properly updated this graphic means exploring the lab was likely scrapped early on.

This leftover was found in &&SystemData\.dol\staticdata_usa.arc\res_titl.szp\timg\begin.bti and was once meant to be an option in the E3 Demo's title screen along with "Skip Intro" which was unfortunately deleted.

Located in \system\system.arc, is an unused font. Its purpose is unknown, presumably used for an early debug mode.

An unused duplicate of the used ghost glow graphic. The used graphic is located in the Game folder while this one in the Effect folder is unused.