A computer game based on the somewhat-obscure trading card game.

The game has a huge number of cards, stored in a variety of places, that go unused. A select few have associated artwork, which, naturally, is also unused.

These cards are concepts that existed at some point in development, but were axed. All that remains are names, border color, and the occasional piece of artwork.

Data Card: Has description: See below 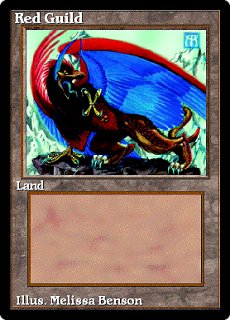 MPS Loho: 0 Mana Cost - Enchantment. Presumed not to be a playable card.

Wizard of the Cost Logo: Enchantment. Presumed not to be a playable card.

One of them, Data Card, says that it "holds data for the attached card and is not important for player use." The attached card is, presumably, Assembly Worker (the pseudo-card produced by Mishra's Factory), which is stored right after it; why the Data Card is necessary (or whether it even is necessary, or used) is not clear, but it might have something to do with making sure the Assembly Worker can turn back into Mishra's Factory at the end of the turn.

There's also a large number of entries in cards.dat that simply have "None" listed for every column, which might be evidence that even more cards were cut.

Nearly all of the real-world cards up through The Dark are listed in cards.dat, even those that don't appear in the game proper. Most notably, this includes all of the cards from Legends, notably because the eponymous Legends were among the cards not chosen. It's unclear which of these cards are actually programmed, but it seems the game at least understands multicolored spells and the Legend rule (and possibly bands with other).

More importantly, all of these cards reference artwork, which (probably) exists! (But I haven't figured out what image format the game uses.)

Terror from the Deep 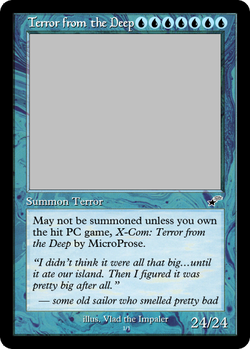 Gee whiz! I'm going to buy X-Com: Terror from the Deep by MicroProse right away!

This charming fellow doesn't exist in cards.dat, but he can be pieced together from information in the CSV files. Since he's not in cards.dat, he doesn't have an associated image. (This isn't what he would have looked like in-game, it's a mockup made with Magic Set Editor.)