From The Cutting Room Floor
< Mario & Luigi: Partners in Time
Jump to navigation Jump to search

This is a sub-page of Mario & Luigi: Partners in Time.

The North American version was released first, with the Japanese version notably rebalancing the difficulty among other cosmetic changes. The later European and Australian versions also contain most of the Japanese changes.

Although the Japanese version only gives the player the option to play in Japanese, this version's files actually contains an in-progress list of French, German, and Italian localized enemy names. A list of changes can be found below.

The date shown at the bottom of the European title screen was been changed to "2005-2006" to reflect the year the game came out in this part of the world.

Additionally, the European version has additional text preceding the title screen which warns the player against shutting off their console or removing their cartridge when the game is saving.

After saving your game, the Japanese and European versions have commas between the circled button letters.

Early in the game, E. Gadd gives the probability of Peach returning from her trip to the past. Her chances are actually lower in the Japanese version, where three additional decimal places were removed from the number due to this version's number font being larger.

Upon being translated into japanese, the script got some minor alterations here and there. One such example can be witnessed when the Mario Bros. give the Refreshroom to Toadsworth, he then exclaims "Kinojii revival!" in the Japanese version, as opposed to his simple "HUZZAH!" in the US and EU versions.

Another, less subtle change can be seen when meeting the Hammer Bros. in Vim Factory. In the North American and European versions, the Hammer Bros. talk in L33tspeak. To help show that they are not their normal selves, their Japanese text is entirely in katakana.

The European and Japanese versions credit Peach's voice actress as Nicole Mills instead of Nicole Miller; the former was what she was credited as in Super Mario Strikers. The European version also took the time to credit the European localization team.

Several audio-related changes and fixes were made during the game's localization, which are listed below:

Baby Bowser will sometimes use Mushrooms to heal himself or Bowser. In the North American version, they restore 100 HP. In the Japanese and European versions, they only restore 60 HP.

In his second phase, Elder Shrooboid brings out a UFO that deals instant death when its countdown timer reaches zero. In the North American version, the UFO starts on the right side of the top screen and switches sides every turn. To reset the UFO's timer, the babies must hammer the spiked balls thrown by Elder Shrooboid into the UFO. It's a little tricky, because Baby Mario hammers the ball up and to the right, whereas Baby Luigi sends it straight up. Hitting the UFO is a little easier in the Japanese and European versions, where the UFO stays in the upper-right corner, and both babies hammer the spiked ball up and to the right.

One of Shroobsworth's attacks consists of him and Intern Shroob throwing a purple meteor. The meteor flies through the air slower in the Japanese and European versions. 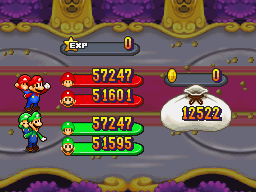 In the North American version, when the player defeats the younger Princess Shroob, the victory screen appears showing that no experience points or Coins are awarded. In the Japanese and European versions, the battle screen immediately fades out to the field after the death animation.

In her first form, the elder Princess Shroob calls for a vim drink that recovers 120 HP in the U.S. version. The same drink only recovers 80 HP in the Japanese and European versions. 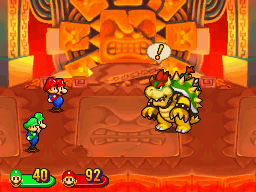 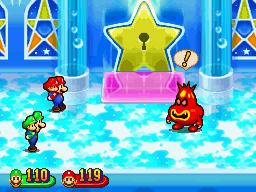 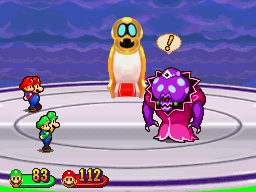 Bowser, Elder Shrooboid, and the elder Princess Shroob have "automatic attacks" in the Japanese and European versions. When the player attacks the enemy, a "!" appears over the enemy's head, who will then attack back despite whose turn it is. Bowser's automatic attack is his fire breath, Elder Shrooboid's is his rotating spiked ball, and Princess Shroob's attack is her body ram.

Many stat changes were made between the U.S. and Japanese/European versions.

Some changes were made to enemy stats in the European and Japanese versions, particularly lowering the HP of bosses. The enemies' US stats are listed first, and the EU/JP stats are listed second.

Additionally, a few tweaks were made to enemy item drops:

Some of the clothing was given a more significant defense boost in the European and Japanese versions: 100-Point Pants, Mushroom Jeans, Para Slacks, Rocket Jeans, Shroom Slacks, Space Trousers, Stache Jeans, and Supreme Slacks all received +20 to their DEF stat.

The second Yoshi who hatches from one of Sunnycide's eggs is black with grey shoes in the US version, but yellow with green shoes in the Japanese and European versions.

The Save Album in the northwestern area of Toad Town is outside the item shop in the US version, but inside it in the Japanese and European versions. The position of the Album was also edited on the top-screen map to reflect the change.

A few glitches that existed in the US version were fixed in the Japanese and European versions.

Throwing the babies into the two Save Albums where Stuffwell lets you use his Warpulator will cause the action icons to go crazy for a short time before disappearing. Normally, the icons smoothly move upwards and off-screen when you hit these Save Albums.

At Gritzy Desert, when the timer runs out after hitting one of the switches, you gain the ability to move regardless of whether there is text on screen. The text disappears when entering a loading zone.

(Source: Partners in Time: Tricks)
(Source: A special thanks to themushroomkingdom.net for a majority of this page.)
Retrieved from "https://tcrf.net/index.php?title=Mario_%26_Luigi:_Partners_in_Time/Regional_Differences&oldid=1019090"
Categories:
Cleanup > To do
Subpages