Mario Forever was a well-received Mario fangame that included new content like items such as the Beetroot and Green Lui, and enemies like Hammer Bros throwing silver hammers.

A hidden text, which is written in Polish, can be found in the loading frame of the game.

Nine Great Journey World levels exist in Version 7.02-31, four of which are unused due to a glitched ending cutscene that softlocks the game. 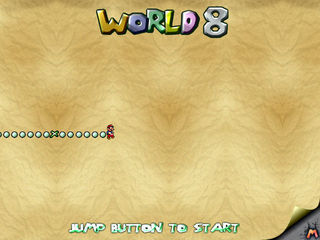 An unused World 8 map frame that doesn't include the map's graphic. In the frames list it's located on top of all the Hardcore World 1 and Hardcore World 2 frames, which suggests that this frame could have been used for Hardcore Worlds. The contents of the frame were removed in Version 5.9, leaving only a blank white background.

An unused copy of Koopa Troopa Liberation can be found in the frames list. Oddly, it's named "starman run". This is basically the same level, but the width has been expanded by 4192 pixels.

An unused heart object is located in the Mario Minix game mode. When placed, it behaves similarly to the Mario life HUD object, but starts its wave at the bottom, rather than at the top.

These three unused objects are located in Lava Run from Version 5.9 and newer. Their purpose is unknown. When Bowser is placed in the level, he will do nothing but can still hurt Mario. Oddly enough, Bowser's graphic has a part of a platform that obstructs his feet.

An unused solid backdrop object is located in Hardcore World 2-4 outside the level boundaries.

This unused sprite is located inside Roto-Disc objects in every game level.

An unused graphic with the text "DISCONNECTED TRY NEXT TIME" can be found in the loading frame from Version 5.9. It was supposed to be used when the game detects a connection break while loading the website, but went unused after the code for loading the website was removed from the game.

This "Enter To Start" text sprite is located in every The Lost Map's map frames, but never shows in-game.

Clouds were supposed to appear in tank levels with different sprites, but this idea was omitted possibly because there were problems with displaying them. It's set to scroll along with the autoscroller, i.e. not visually moving in game, just like the ground.

An unused empty sign graphic is located in the save game room outside the frame boundaries.

A more boring and static-looking water animation can be found in secret world frames such as Hardcore Worlds and The Lost Map. The object using this graphic is available and even used in The Lost Map's second and fourth levels, but it cannot be seen since it's outside the frame boundaries.

Mario saying "Yipee!". The file name is Mario_Check_Point_Speech_3, which means this is meant for when the player reaches a checkpoint, though it never gets used due to an oversight.

A different Starman theme can be found in Versions 6.0 and newer. This can be heard by getting a star in World 9, but since there are no stars in that world this theme ends up being unused. 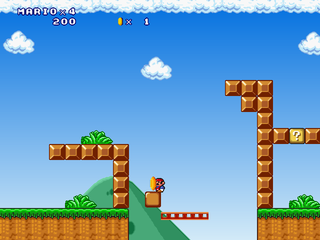