Mega Twins is a side-scrolling action game by Capcom that has no relation to Mega Man. 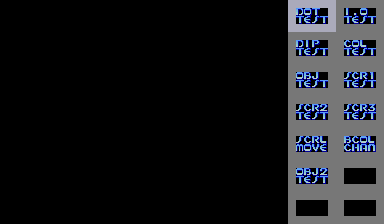 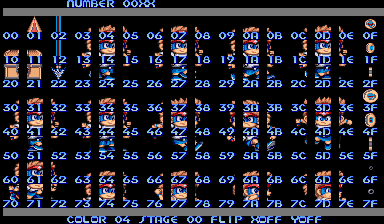 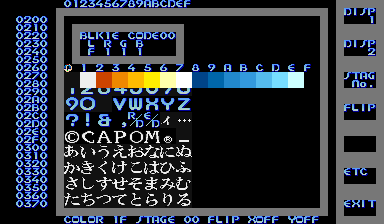 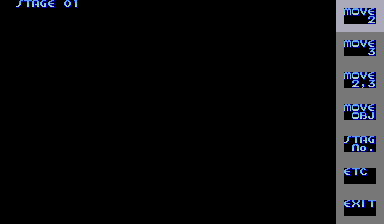 Allows the user to view background and/or foreground layers in any of the game's stages. 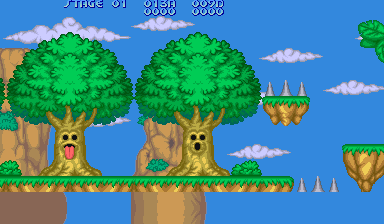 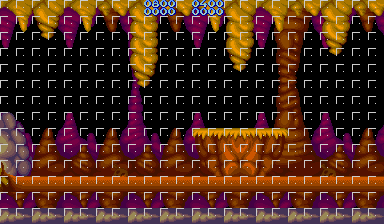 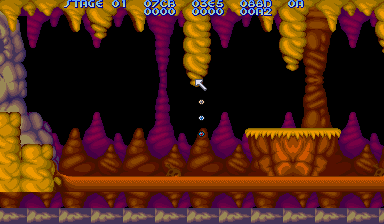 Largely the same as "MOVE 23", except for the addition of an on-screen cursor. The value at the top-right displays the collision ID of the tile the cursor is on.
(Same controls as MOVE 2 / MOVE 3 / MOVE 23)

STAG no.
Changes the loaded stage.

ETC
Does nothing on this menu. 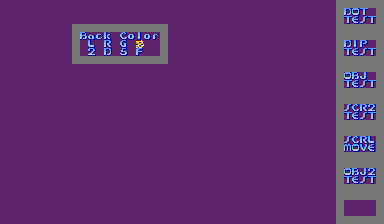 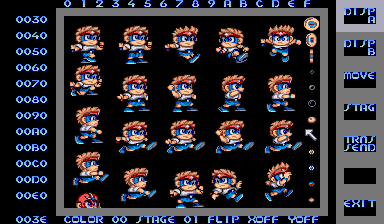 Seems to be an animation viewer for sprites, but it doesn't seem to work properly here.

DISP A
Identical to the standard Object Test viewer. 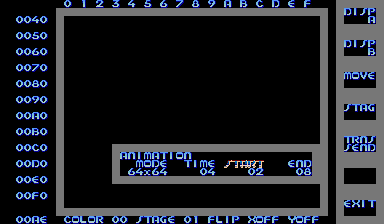 Brings up an "Animation" sub-menu.

Track 1E is used in the game, but the method to do it is obscure and doesn't seem to be documented anywhere. Hit the mini-boss of Round 2 before the cannons in his arena fully rise up to play this track. This is one of the boss themes from Forgotten Worlds, the first CP System game.

In the Japanese version, the "coin inserted" noise is someone saying "がんばって ね" (Which means "Do your best"). In other regions, it's a cheery jingle.

In the Japanese version, if you hold Up and jump with the Boots item, you will jump 16 pixels higher. In other regions of the game, this is the default jump height and it can't be changed. Starting in Round 4-1 in the Japanese version, you no longer have the Boots item at the beginning of stages and must collect them from certain treasure chests. In the international versions, you always have the boots at the start of a stage. All of the Boots chests have been replaced with 100-Coin chests.

There's an item that only appears in the Japanese version: the Final Key. This item is obtained by slashing at Riepotmahn's chair until a chest pops out. The key is inside the chest. This key serves a special purpose. If Riepotmahn's second form is defeated with the key obtained, he will drop a chest with the second Dragon Blue Eyes item inside. Without this item, the player can't get the true ending.

In the international versions, Riepotmahn will always drop the second Dragon Blue Eyes in place of the scroll he normally drops. However, the bad ending can still be seen by letting the Eye stay on-screen until it disappears.

Mystery of the Captive Women

In the Japanese version, starting in Round 4-1, there are tied-up blue-haired and blonde-haired women that the player can save. Both women use the same design, they're just palette-swapped.

In the international versions, these women don't appear in-game, but they're still present in the game's code. At the start of the initialization routine for the captive women, the game checks the region ID word at FF101E and if the value is non-zero, the routine is exited and the woman disappears. Place this MAME code in mtwins.xml or chikij.xml to skip this check:

By disabling the check, we can see that not only are the hints translated, but the sprites for the kidnapped women use a completely different design! It seems that at some point, rather than just removing them entirely, the captive women would just use an older-looking design in international versions of the game. Apparently even that was still too risque. 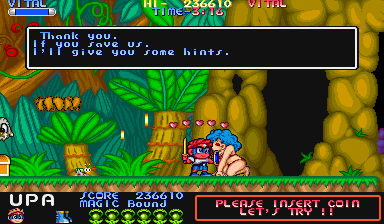 Here are all the translated hints:

The following hints are present in the ROM but not used: