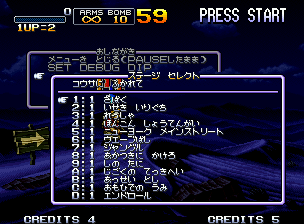 Like mentioned in the main page, there are 56 unused stages in Metal Slug X. Some of them were later used in Metal Slug 3 with some fixes. All of them are selectable from the stage select option in the debug menu. Some were simply warps to some sections in the stages. Here's a list of them plus the comparisons between them and Metal Slug 3.

And now to find out what is actually interesting. The codes next to the Metal Slug 3 titles are the stage codes in MS3's stage select screen.

This is an area from Metal Slug 3 if you take the bottom route at the first section of Mission 4. There’s no objects, nor an exit. It appears that when it was used in Metal Slug 3, they mirrored the room, added in the staircase and removed the background from the windows.

This is the desert area at the start of Metal Slug 3, Mission 4.

It goes on seemingly forever, and there’s no scenery or anything interactive. Unlike Metal Slug 3, you don't leave footprints on the sand, but there's the small detail of sand being blown by the wind that seems to be excised in its final iteration.

Another Metal Slug 3 level, endless and devoid of objects. The background is less detailed, and the lighting from the torch is more subdued than the final. The pillars are also revamped.

This is the spiked ceiling part from Metal Slug 3, but the ceiling doesn’t lower at all and you can walk through the walls ahead. The area was merely given a new color to look more dark and nasty, but the ceiling was given a massive spit and polish.

The sand-shifting slope from Metal Slug 3 is here, but of course, there’s no obstacles. There’s some very minor edits: The whole room has been recoloured (obviously), but the MS3 version has alternate or less details:

They’re not major differences, but it’s interesting to see what they changed.

Another MS3 level, this is the area with tons of items, but the door opens to reveal more of that crazy exploding moths. The only differences appear to be the inclusion of a door to the right and obstacles, and the area made more dark.

An early version of the stone lift, seemingly endless. All they did was give the whole place a new brand of paint and that's it.

This appears to be remnants of the flying part of Stage 5 in Metal Slug 3 ; once you reach the sky, your character dies for no apparent reason, and an explosion occurs at the top left corner. Strange. 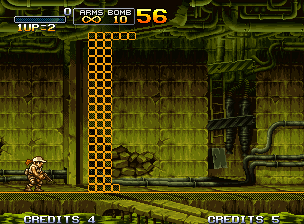 It’s similar to the third area from Mission 5, but there’s no obstacles, and you can only go so far before you run into an invisible wall. The wall is shown by using the "VIEW GEO SCROLL B" debug feature in the screenshot.

The battery-collecting-for-the-exit stage from Metal Slug 3. There’s quite a few changes, such as a computer terminal in MSX is replaced with boxes, the platforms risen, and boxes added, removed and rearranged. The grime in the background was also redrawn, and a few pipes were added in.

This is the mutated bug area from Metal Slug 3’s fourth mission. Pretty much the entire place was redone, with tons of more detail added in. In MS3, the area's flashes color slowly and gradually, but MSX is a lot more blatant about it, making the flashing fast and cycles between colors faster.

The underwater path from Mission 1, Metal Slug 3, complete with Slug Mariner! There doesn’t seem to be much changed in graphics, they just added in a few things and changed the colors of when you drive closer to the bottom. They added in a few cliffs for prisoners and boxes, and additional details were added to the jellyfish caves and eel cages. The level ends once you reach the bottom, where you’ll die if you drive to the bottom.

As for the Slug Mariner, it seems rather complete, aside from a few things: Its gun doesn’t shoot the “floaty” bullets, and goes in a straight line just like the turrets of the Metal Slug and Slug Copter. Its bomb appears complete, but since there’s no solid ground here, you can’t see what its explosions look like; it also has the wrong word in the HUD (“cannon” instead of “missile”).

However, you cannot exit the vehicle, nor can you Slug Charge with it. When it explodes, instead of your character playing the drown animation, they fly out as if above water, even though the drowning animation is in the game. 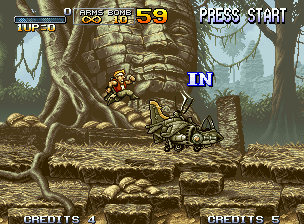 Does this look familiar? It should, as it’s Mission 1 from Metal Slug 1! It’s complete, excluding all the obstacles and enemies and stuff. It even has the reflections in the water, the stones that crush you and the little fish you can shoot the flesh off! And it also has a Slug Flyer right at the beginning, which is awesome.

The upper path of Mission 1. The background was made gloomier, and some dead fish were added to the foreground in MS3.

The upper path of Mission 4 from Metal Slug 3. Not much have changed apart from the typical design changes and the only change in MS3 appears to be the removal of the trees and the background was lowered slightly.

The samurai caves! These are from MS3, and there are no major differences aside from the slight color changes, minor additions, like that rock there under the timer in MS3's screenshot. 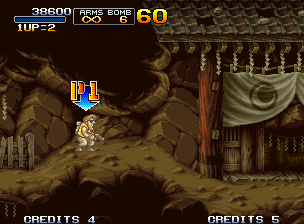 Starts you a little more into the samurai cave. 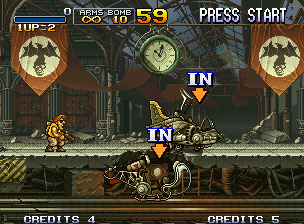 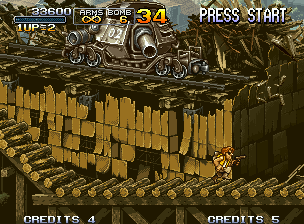 8:1 drops you at the very start of the second mission from Metal Slug 1, just without some obstacles and enemy spawn you would expect. From the spawn point you will gain access to both Slug Flyer and a Slug Copter, the latter will make an appearance in the sequel. The Slug Copter is also mostly finished, with a few minor details: unlike its proper appearance, the bombs go straight down instead of at an angle, some rotations cause the vulcan to turn completely white, and lastly the bullets fired are similar to the Metal Slug instead of the spinning oval ones.

The lights near the railway also function with a dimming light effect that is static in the original game.

Some snowball-rolling enemies appear before the bridge, and there are still rubber ring bazooka guys and boats there, with the last one actually using the unused sprites from the first game - if you just eke it a little to the right. You cannot destroy the scenery like you would in Metal Slug 1, sadly. The mini boss is still present but the level stops a little after that, since the screen doesn’t scroll up, you’re trapped there.

A little detail added in this version is that there's a new staircase heading upwards, where you have to crouch at the intersection to progress normally. Going up the stairs will get you stuck, and presumably if the warp works it would lead to 8:2. Part of this area is used in Metal Slug 4, but the stairs are inaccessible this time. 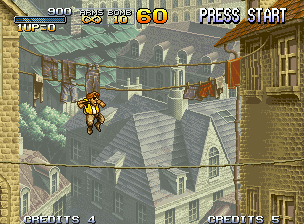 This is a strange level which takes place on roof tops and balconies. While it appears there are several gaps which you can’t jump over without dying, there are unused objects to be placed on the clothesline and that you are supposed to use them as stepping stones to jump over to the other side. 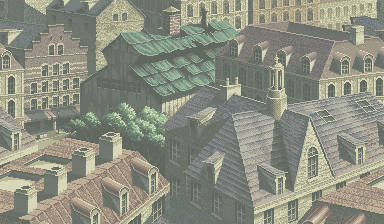 Background layer of the area. This is the same from MS1 Mission 2, but horizontally reversed and with different colors. 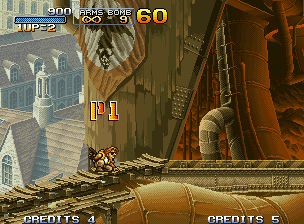 8:3 warps you ahead of 8:1's second set of stairs that lead to nowhere, and spawns you near the boss area. The background is static unlike its original appearance and walking far enough will cause the screen to auto scroll. No boss to fight here, however.

This is the sewer area, just before the staircase. Sounds normal? The catch is that the vertical scrolling isn’t working, and you’re trapped. There’s also some downright dodgy tile placement, such at the pipe with two middles and that bit at the edge there. Also, the level graphics were partially used in Metal Slug 4, with changed colors. 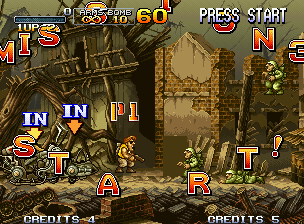 It’s the fourth mission from Metal Slug 1, AND claims to be the third! As usual, you’re given access to a Slug Flyer and Slug Copter, but this level seems rather incomplete. For starters, there’s an endless stream of soldiers storming you from the right side of the screen; second, the destructible cliffs are missing, making the background have large chunks missing. And aside from the vehicles and soldiers, the level is pretty much empty.

That area from MS3, the second part of the bottom path in Mission 4. It appears that all they did was simply reverse the background, hilariously making the barrels look as if the text were upside-down. 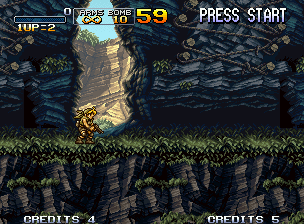 This is another level that isn’t used anywhere else; it’s a cliff, but with openings in the cliff to show more cliffs. It is similar to the cliff in Metal Slug Mission 6. 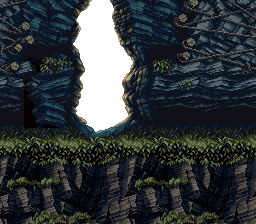 Background graphics. Full map consists in about 7 repetitions of this.

Background layer of the area.

Another part of the bottom path from MS3. The palette was darkened and additional details are added to the ceiling.

This is the cave from Metal Slug 3 where you get the Slug Mariner(s). They changed the palette, reversed the background, and added a few pools of water. And the music is absent in MS3, replaced by dropping water droplets instead.

Background graphics. Full map consists in about 15 repetitions of this. 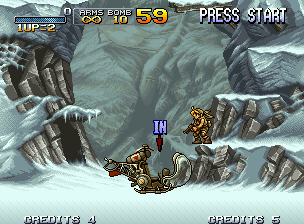 Brings you to Mission 3 from Metal Slug 1, though the game claims it’s the fourth mission. This gives you access to a Slug Copter at the start and Slug Flyer a bit later, and appears fairly normal, other than the typical lack of obstacles, and inclusion of a limitless number of enemies from the right side of the screen, and a gap in the tiles before that destructible building. The destructible building explodes upon being looked at, and the sky isn’t correct in the area after it. 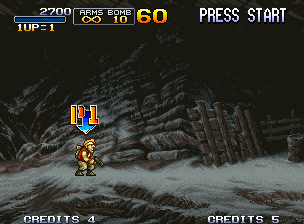 A small snowy area. It looks like it would be part of Mission 2 in Metal Slug 3. 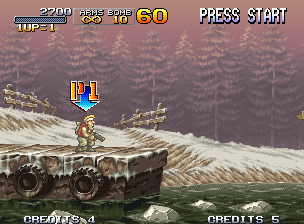 The first part of Mission 6, bereft of obstacles and platforms you're supposed to jump on to advance.

A part of Mission 3 from MS3, if you take the submarine dive! There’s a prisoner right ahead, and off the edge of the screen are some unobtainable weapons (they drop off the bottom of the screen), and once you scroll back, a Girida-O and a parachuting platform appear. The prisoner gives you an Armour Piercer.

It was also given serious remodeling in MS3. The palette was darkened, the moving platforms are added, and those teeny tiny boxes were changed. 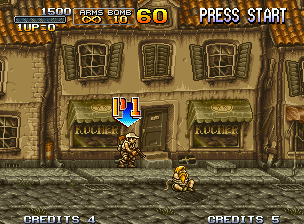 It’s Mission 5 from Metal Slug 1! You start with a prisoner in front of you, who gives you an Armour Piercer, and after that, some weapons appear. In the order they appear: Another Armour Piercer, Shotgun, Rocket Launcher, Flame Shot, Laser Gun, and Enemy Chaser. Other than another tank on a parachuting platform, this level is fairly normal. 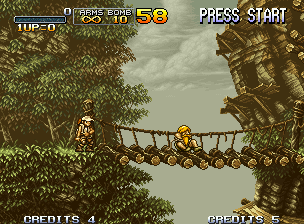 Final Mission of Metal Slug 1! There’s yet another Armour Piercer wielding prisoner right ahead, and a Girida-O that appears from out of nowhere, and other than falling through the ground to reach the boat that is missing its AA turret, this level appears to be fairly normal.

This is that part from Metal Slug 3 right after that underwater pipe and the ostrich ride just a bit ahead. Only the palette is changed here.