Present at 0x5F8D0 in the ROM is a build date and version number which are the same in all versions.

Present at 0x1220 in the ROM is where another build date and version number used to be.

Present at 0x2D9806 in the ROM is a directory where the sound samples were compiled from. It looks like someone on the dev team wasn't very fond of the Nintendo 64.

After beating the game, the credits are shown in a small screen at the bottom of the screen. However, the text was never scaled to fit the small box, which causes it to get cut off. 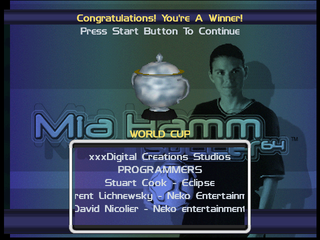 The game was rebranded in every region it was released in and features completely different title screens.