Mischief Makers is a game that demonstrates very well that the Nintendo 64 needn't be all about 3D, and sidescrollers can still be amazing. As long as there's something to shake, that is.

Unused sprites of Marina and Professor Theo. it's unknown in which context these were going to be used in, but the TROUBLE SHOOTING artbook shows that Theo was suppposed to hold Marina.

Marina's Lifebar icon has 3 unused expressions looking up and down.

The Day Before Early Graphics 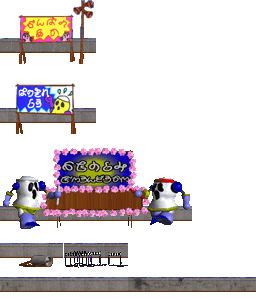 Earlier versions of background graphics used in The Day Before Level which look completely different from the final ones. (Palette is not 100% correct).

A dark metallic switch which was found alongside Imperial HQ sprites.

The game has graphics for all buttons on the N64 controller but only uses the L and R buttons.

A graphic of a N64 Controller.

A small sprite of a Nintendo 64.

A log and stump covered in snow. These have an artstyle that doesn't match anything else in the final game.

A render of an umbrella.

A bongo with a clancer face. 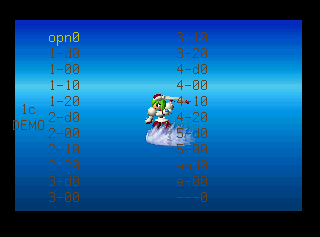 A hidden level select can be accessed with the following GameShark code. With the code on below, at anytime during game, press L + R + Z to enable the menu. This works best during a level. 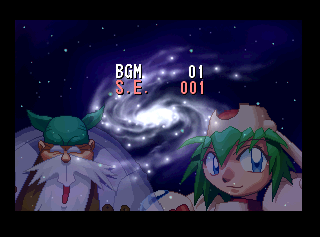 On the title screen, press and hold L, A, C-Left, C-Right and press Start. Use the D-Pad to change the values and A to play your desired sound. Pressing Start again returns to the title screen.

The international versions show the Nintendo 64 logo before the Enix logo, which is absent from the Japanese version.

In the opening sequence for the Japanese version, when the Clancers are thrown away from the screen, the characters in the logo appear as the boulders scatter, arriving one at a time and rotating in place. Rather than recreate this for the English title, the developers simply removed the letters, leaving just the blue background as the boulders fall away.

The Japanese logo has a bit of text reading ゆけゆけ！！ ("Yuke Yuke!!") being trailed by a projectile, which flies in from the right a moment after the title screen is displayed, accompanied by a sound effect. The international versions additionally had the copyright line reworked.

In the Japanese version, the first Clancer in the first stage has a bit of text that pops up over his head when he's waiting for you to follow him. It reads "コッチだよ", meaning "This way!". This was removed from the international versions.

In the Japanese version, when the first Clancer in the first stage is done leading you, the text "アッチだよ" meaning "That way!" pops up over his head. Like the "コッチだよ" pop up, this was removed from the international versions.