Mouse Stampede is like Millipede, but with rodents instead of arthropods, cheese instead of mushrooms, and ouse Stam instead of illi.

An updated version was produced in the mid-nineties, and posted as a free easter egg on MOTU's web site. Some of its changes added compatibility with recent systems: multitasking awareness, a centered playfield on larger screens, and the ability to quit at any time instead of rebooting.

Both versions include a date in the owner resource: 30 July 1984 for the retail release and 25 January 1994 for the download. The latter is one day after the tenth anniversary of the Macintosh, which may have been the author's occasion for revisiting the game.

Jason Linhart is well-attested as Mouse Stampede's developer, from a caption in the Baltimore Sun to a Slashdot comment by MS sprite artist Bill Spitzak. A 1983 Byte article also names Linhart as MOTU's president at the time. Conversely, there's no record of a Tom Wade having any association with the company. Why the first version went out under that byline is an enigma, to say nothing of "Walter" and "A Herd of Walruses".

A page of online documentation was added to replace the printed instructions. 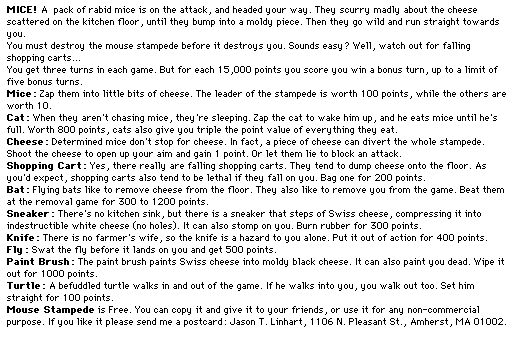 Semaphore Signal's review expressed confusion about the option to choose a starting score. Version 2.0 added an explanation of its purpose as a difficulty switch.

The game's theme song riffs on "Three Blind Mice", and so does its copy protection.

The disk check compares two otherwise unused strings in the application — FarmersWifeCarvingKnife at 70DF and 1.0.0 at 70B3 — with their counterparts at the beginning of the file Stampede Stuff. If either fails to match, the game is "cut off" by a spontaneous reboot. (And you'll never, ever manage to copy that file, because it's locked behind the impregnable bozo bit.)

The only other legible text in Stampede Stuff is the phrase "Stampede Protector".

Version 2.0 no longer includes the file, the strings, or any copy protection.

In version 2.0, some source code fragments were written to what used to be empty space. They can be seen at the beginning of the application in a hex editor.