Mr. Gimmick is an action-platformer that looks cute but is punishingly difficult. Despite receiving mixed reviews in its time and despite being released late into the Famicom's life cycle (just over a year after the Super Famicom's debut), it has gained a cult following around the world over the years thanks to its overall polished presentation and rewarding-to-master star attack that doubles as a platform for finding items necessary to get the game's good ending.

Unfortunately, the only international release was in the Scandinavian countries, though at least one prototype has been found for the planned US release. 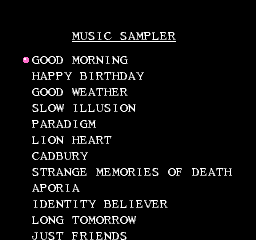 To access the music sampler, hold Select and press Start at the title screen. It contains every track in the game, with the exception of Evidence of My Life (later named in a separate OST) and an alternate version of Cadbury with slightly different instruments.

The round cursor color depends on bits 1 and 2 (a total of four different colors) of some music data, which don't frequently change and remain at zero most of the time with the exception of two music tracks: Strange Memories of Death and Paradigm. This color change only occurs in the Japanese version.

There is not much connected to it; the developers just selected not-so-frequently-changing data to highlight the cursor. If they had selected another piece of data, it may have been much more interesting.

For the Japanese (NTSC-J) version, use both ZEETLZPS and PAVVTZAA Game Genie codes to activate the functions below, and, for the Scandinavian (PAL) release, only PAVVTZAA is necessary.

In the Japanese version, pressing Select on Controller 1 will refill your HP. On Controller 2, pressing A + B will increase lives. Using the D-Pad on Controller 2 will warp to one of the four checkpoints in a level and pressing B will complete the current level and return you back to the map. The level skip function will result in the bad ending, unless the player collects the special item in each level before using it. Holding A and pressing B will enable the good ending.

In the Scandinavian version, all functions are done using Controller 2. Pressing A will refill all items and HP. The other functions work the same.

The second track in the NSF, "Strange Memories of Death", goes unused in the game proper. It can be heard in the sound test, though.

Almost 30 years later, this track would finally see in-game use in the arcade remake Gimmick! EXACT☆MIX, where it is used for the new continue screen. 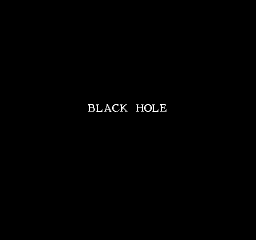 The game features a unique copy protection routine. If the intro code is tampered with (as is the case with the pirated version, Shui Guan Pipe) and the player makes it to the secret Stage 7, the routine will trigger, preventing unsuspecting unauthorized players from being able to reach the final boss and get the good ending.

The routine itself is a remnant of Tomomi Sakae's attempt to prevent his name from being removed from the intro. He was ultimately unsuccessful in doing so, as the final game is neatly altered around the routine trigger. The message displayed is a reference to Atlantis no Nazo, an earlier Sunsoft game, and is itself another change that was made to the prototype before release.

In the Japanese version, Game Genie code PAZAOY will change the value at address 8F21 to 01, which will trigger the message: Simply access the final level and walk close enough to the castle for the routine to be executed. Conversely, Game Genie code IALEUN will maintain a value of 0D at address 8F3B, bypassing the copy protection routine and allowing the bug in the final level to load properly.

See the Notes page for a detailed description of the copy-protection code. 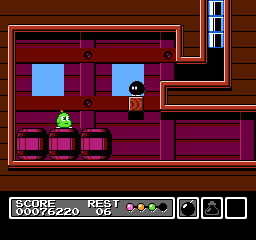 One strangely still Ohagi in the ship's interior portion of Stage 2 can actually be controlled using Controller 2.

On Controller 2, Left and Right makes the Ohagi walk, and A makes it jump.

Like any other enemy, the Ohagi will still do damage if it runs into the main character. Unfortunately, it cannot defeat enemies and cannot be brought into any other area of the stage.

This is found with the ending cutscene graphics of Yumetarō and the girl running away from the crumbling castle.

A variety of unused text characters and symbols. The letter "A" takes up two tiles, and was intended to be used in a scrapped intro screen, documented below.

The Scandinavian version contains two unused intro text strings that were (mostly) overwritten in the Japanese version, which is rather odd given the fact that the former is a later build of the game.

Found at 0x37C43. This string was partially overwritten by the "AUTHENTIC ENTERTAINMENT" string used in the intro. The "CK" would seem to imply that it once said "GIMMICK ENTERTAINMENT TEAM".

The full string being present in the Japanese prototype seems to confirm this.

Found at 0x37C5A. Note that this uses a different spelling of designer Tomomi Sakae's last name. The letter "A" used in the first line is actually comprised of two tiles, both of which are only present in the Japanese version!

Only a small portion of this string, "TOMO", remains in the Japanese version; oddly enough, the aforementioned anti-piracy routine actually checks for the presence of these unused characters.

In what appears to be a disease that plagues several games that uses DPCM samples (including Double Dribble, most of Sunsoft's later NES output, and Klax), Mr. Gimmick's samples are corrupted thanks to a hardware misunderstanding. While this doesn't heavily affect the "Sunsoft Bass", the other bass and drum samples are significantly affected, sounding "crustier" than they actually are.

On the left is how the samples are actually formatted, and on the right is how they actually play back on the Famicom/NES. An explanation for this corruption is given on Double Dribble's page.

The Japanese version and US prototype start the player with four lives, whereas the Scandinavian version offers eight lives instead.

The Scandinavian version and US prototype have minor alterations to the music to make up for the missing extra sound chip. As an example, Strange Memories of Death seems to suffer from this change the most.

Both the Scandinavian release and US prototype replace the katakana on the title screen, which reads "Gimikku" (ギミック), with "Mr. GIMMICK." 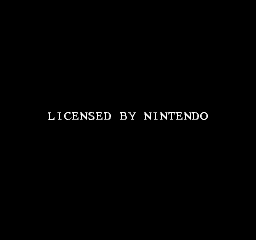 The Scandinavian version shows a "LICENSED BY NINTENDO" screen when booting up the game that was completely absent in the Japanese version. 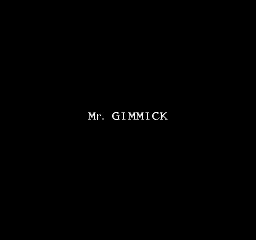 Additionally, the 'GIMMICK!' screen is changed to 'Mr. GIMMICK' in the Scandinavian version and the US prototype to reflect the change made to the game's name.

In 2002, Gimmick! was rereleased on PlayStation (and later the PlayStation Network) through the Japan-only two-game compilation Memorial Series Sunsoft Vol. 6 (メモリアルシリーズサンソフト Vol. 6). This version uses the original Japanese ROM, albeit with a few bytes changed.

First, the visible area has been cropped on all four sides, most noticeable on the top. As a result of this change, ceiling hazards appear to be floating, and it's slightly harder to notice the entrance to Stage 6's secret area.

The above comparison uses the track Just Friends, which plays in the secret areas hidden throughout the game, as an example. The harmony is overemphasized in the PlayStation version, overwhelming the melody.