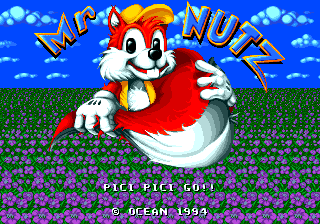 The game contains a hardcoded password (@impo@) that can't be activated, due to the "@" character not existing in the password system. To re-enable it, enter the following Game Genie codes and enter the password AAAAAA.

If entered correctly, the text "PICI PICI GO!!" will appear on the screen. This password expands the horizontal resolution of the game from 256 pixels to 320 pixels. (Note that if you allow the title screen to return to the SEGA screen, the aspect ratio will be reset and the password will need to be entered again.)

A message from developers Pierre Adane and Philippe Dessoly can be found directly below the ROM header. It also contains a build date, though it's much earlier than the one in the ROM header itself: 1994.DEC.

On the title screen, press Up, Up, Up, Right, Down, Left, Left, Left, Down, Down, Right, Right on controller 2. A sound effect will play upon correct code entry. Now during gameplay, press A + B + C + Down + Left on controller 1 to skip to the next level.