This is a sub-page of New Super Mario Bros. U.

When nybble 8 of a Goomba sprite (0) is set to 1, it will be placed behind layer 1 (the tiles that Mario can collide with) and other sprites.

The Paragoomba sprite (1) has the same unused setting as the Goomba.

Sprites 2-13 (all of the pipe Piranha Plants, pipe Venus Fire Traps and pipe Venus Ice Traps) have an unused setting (nybble 12) that crashes the game if set to 1. The reason for this is unknown.

The Buzzy Beetle sprite (22) has a setting, nybble 12, that changes how it spawns. 1 makes it upside-down, 2 spawns an empty shell instead, and 3 spawns an upside-down empty shell. 2 and 3 are unused. This is a leftover setting from New Super Mario Bros. Wii. 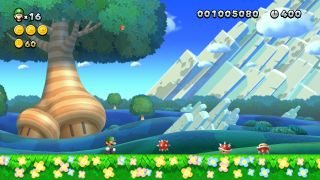 The Spiny sprite (23) has the same unused setting as the Buzzy Beetle. Additionally, sprite 24 (unused) is an upside-down Spiny.

The arrow signboard sprite (32) has an unused movement capability: nybbles 21 and 22 can be used to connect it to a bolt controller.

The sprite for "?" blocks (59) has a rather unusual unused setting. When nybbles 9 and 10 are both set to 1, the "?" block will be placed behind tiles and other sprites, and cannot be hit by Mario by any normal means.

When nybble 19 of a coin sprite (65) is set to F, it will drop to the ground upon spawn, as if spawned by an enemy killed by a fireball.

When nybble 11 of a Huckit Crab (74) is set to 0, it will hop backwards. This is leftover from New Super Mario Bros. Wii.

Lava (sprite 89) has a feature that causes giant waves to spawn, which is used in World 5-Castle (Iggy's Volcanic Castle). Despite this feature being used only once in the game, the sprite has many options to adjust the waves' behavior. Unfortunately for whoever took the time to program this flexibility, all of them are set to 0 in that stage, and are therefore unused!

The sprite that causes other sprites to come out of pipes (98) can spawn Goombrats if nybble 11 is set to 2 or Red Koopa Troopas if it's set to 4.

This was necessary in the DS game because sprite positions were constrained to the tile grid. That constraint was removed for New Super Mario Bros. Wii, though, making this setting useless there and here.

The flag at nybble 8 will shift it 1 tile upwards. This option is completely useless, and there is no obvious potential use for it.

The Thwomp (sprite 135) and the Giant Thwomp (136) have two unused settings. When nybble 12 is set to 2, the Thwomp will fall as soon as it loads, no matter how far away the player is. Nybbles 10 and 11 can be used to specify a specific invisible region (also known as a "location") that the player must touch to cause the Thwomp to fall.

When the flag at nybble 10 of the cannon sprite (176) is set, the cannon will rotate 90 degrees back and forth between firing. This is an unused leftover from New Super Mario Bros. Wii.

When the flag at nybble 12 of a Fire Snake sprite (194) is set, it will load as a small, stationary fireball, and will attack the player normally when approached. This is yet another leftover from New Super Mario Bros. Wii.

The flag at nybble 5 causes the springboard (sprite 215) to always remember its position, and not return to its starting position if it goes off-screen. The flag at nybble 10 causes it to be placed behind other sprites.

Finally, a setting left over from New Super Mario Bros.: the flag at nybble 11 will shift the springboard half a tile to the right. This was necessary in the DS game because sprite positions were constrained to the tile grid. That constraint was removed for New Super Mario Bros. Wii, though, making this setting useless there and here.

Setting the flag at nybble 15 of the snake block (sprite 222) will cause it to be icy and slippery, like the one in New Super Mario Bros. Wii.

Setting the flag at nybble 12 of a Foo (sprite 229) will prevent it from blowing clouds. (It will still play the blowing animation and sound effects, but nothing will come out of its mouth.) This is very useless because it defeats this enemy's entire purpose. This is yet another leftover unused setting from New Super Mario Bros. Wii.

Setting the flag at nybble 12 of a Muncher (sprite 259) will cause it to be frozen in an ice cube. This is a leftover from New Super Mario Bros. Wii.

Value 0 of nybble 11 of the rotating burner (sprite 293) is unused. This value causes the flame to rotate back-and-forth from left to right, passing through an upward position.

Setting the flag at nybble 13 of a note block (sprite 295) will cause it to contain an Acorn Mushroom.

Nybble 12 of a Clampy (sprite 298) determines what it holds in its mouth. Value 0 (nothing) and value 4 (P-switch) are both unused.

When nybble 12 of the "?" block that contains Baby Yoshis (sprite 380) is set to 0 or 1, it will contain a Bubble Baby Yoshi or Balloon Baby Yoshi, respectively. Only value 2, which causes it to contain a Glow Baby Yoshi, is used.

When nybble 18 of the giant ice block used in Layer-Cake Desert-Ice Block (Piranha Plants on Ice) (sprite 393) is set to 1, it will be 1.8x its normal width. This causes it to look unnaturally stretched.

Nybble 9 of the spinning stars from Frosted Glacier-1 (Spinning Star Sky) (sprite 395) controls their size. Value 2 is unused, which produces a spinning star larger than any seen in the game. (Higher values than 2 do not increase the size further.)

Nybble 7 of the line-controlled platform sprite (535) determines its style. When set to 4, it will look like a cloud!

There are a total of 151 unused sprites.

Sprite 24 is an unused upside-down Spiny. This is unusual because normally an upside-down version of a sprite is defined as a setting on that sprite, not a different sprite altogether. Furthermore, the normal Spiny already has an unused setting for this.

The Spiny will drop down and spin towards the player when approached.

Sprite 39 can be used to enable a random event. This is a leftover from New Super Mario Bros. Wii... where it was also unused.

Sprites 80 and 81 look like a metal platform and an Acorn Plains land block, respectively. They each can be set to move back and forth in a straight line (nybble 6: 0 = left, 1 = right, 2 = up, 3 = down) (distance is nybble 15) (speed is nybble 16) with adjustable delays (nybble 13 is delay before moving, nybble 14 is delay before returning). The width and height can be set (nybbles 18 and 20, respectively), and the platforms can be tilted an adjustable amount (nybble 7; increments of 22.5 degrees counterclockwise).

Sprite 93 creates a thin, wispy fog effect. This is a leftover from New Super Mario Bros. Wii, where it was used in ghost houses.

Sprite 112 is a duplicate of the Bill Blaster turret.

A duplicate of Balloon Baby Yoshi exists. It works the same, but when it gets to the goal, it just gives a 1-UP and doesn't follow the player like what the Glowing Baby Yoshi does at default. It's possible it was intended for the Baby Yoshi Eggs, which are not in the final game.

Sprite 172 is the Rising and Lowering Bill Blaster, an unused leftover from New Super Mario Bros. Wii. The firing direction (nybble 7), movement speed (nybble 10) and heights (nybbles 11 and 12) can all be set. It can also be positioned upside-down, as well, using the flag at nybble 5.

Sprite 197 is what's left of the desert wind sprite from New Super Mario Bros. Wii. The graphics don't work (although they still exist in the game's files), and nothing gets pushed by the wind. If you stand next to a midway flag or a rope ladder while this is in a level, though, you can see them flutter periodically as if the wind was there.

Sprite 198 creates a snow effect, and Sprite 201 creates a rising lava ash effect. The Frosted Glacier and lava-related course backgrounds can spawn these effects automatically, so this sprite isn't needed.

Sprite 203 is an ice block you can pick up and carry around. The flag at nybble 10 will cause it to have a coin inside; however, the coin will be a bit glitchy if the player changes direction while holding it.

Sprite 205 is another leftover from New Super Mario Bros. Wii: a "?" block that can float on water.

Sprite 208 is a brick block with a "?" switch. Nothing really special; it still works.

Sprite 226 is a moving ice block spawner, which can be set to spawn ice blocks moving in either direction (nybble 11). The size of the ice blocks can be changed with nybble 12.

Sprite 227 is similar. It's unclear what the difference is between the two.

This is a direct leftover from 1-Tower in New Super Mario Bros. Wii: a brown tower block that can move back and forth. It got a small improvement, though: it can be tilted at various angles now, using nybble 7!

Sprite 339 is a wooden box spawner. It can only spawn the orange-and-yellow ones, though.

Sprite 366 is a rotating line of coins. Not much is known about this sprite yet.

Sprites 437 and 438 are duplicates of the Goomba. The used Goomba is sprite 0.

Sprite 444 creates floating snowy boxes like those seen in Frosted Glacier-Fliprus (Fliprus Lake), except far larger: at lease 4x larger than the screen size! The settings available match those of the used boxes.

Sprite 470 is internally called the "Purple Ring", but is disappointingly just a duplicate of the Red Coin Ring.

Sprite 507 causes a Super Star to fall from the top-right corner of the screen at a 45-degree angle when the player enters a given invisible location.

Sprite 539 is another ice block! But this one is the most interesting. It rolls back and forth. The size can be customized, as can the rolling distance and speed. Whenever a corner hits the ground, your controller will rumble. The slowest available speed is too fast to be useful for level design, and sends your controller into a rumble seizure.

Sprite 542 is a bouncy mushroom platform that can be moved with a movement controller. The color, thickness and length can all be adjusted.

Sprites 575-578 are pipes that face left, right, up and down, respectively. They differ from used pipes in that they actually create their own collisions. (All stationary pipes that can be found in the game have collisions created by invisible solid blocks, not the pipes themselves. None of the other New Super Mario Bros. games work that way. Surprise!)

Sprite 581 is a very interesting Bull's-Eye Bill Blaster. A setting at nybble 9 can cause the "homing" to beep like a time bomb and blink three times before exploding! The height can also be customized (nybble 11), and the blaster can be turned upside-down with nybble 5.

Sprite 592 is a green Searching Cheep Cheep that spawns when the player enters a given invisible location.

While there are many interesting unused sprites in this game some of them just don't work at all. Thanks, Nintendo.

Since all of the actor names are encoded in Shift-JIS, a possible translation has been given for each.

Retrieved from "https://tcrf.net/index.php?title=New_Super_Mario_Bros._U/Unused_Objects&oldid=690869"
Categories:
Cleanup > To do
Subpages