Nightmare Busters tells the story of how leprechauns Flynn and Floyd save the children of the world from having nightmares.

Originally slated for a 1995 release by Nichibutsu, the game never made it to shelves due to financial issues. It was later rebranded as Flynn's Adventure and released on mobile phones in 2004.

In 2010, a prototype was leaked onto the internet, and Arcade Zone resumed development on the game after positive reception from players. The game was officially released in 2013, making it the first SNES game to be released commercially outside of Japan since 1998. 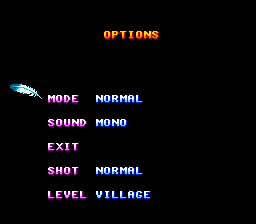 The code for the level select remains unchanged from the prototype. At the title screen, press Y, R, L, Down, Down, Right. You should hear a jingle if entered correctly. Enter the Options menu to see a level select and a Shot mode added to the list. 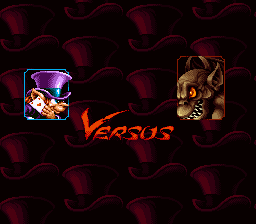 Change the byte at 05871FAD to 18 and start a game to access an unused (and unnamed) gargoyle boss. Although the boss portrait shows up, the rest of the sprites for the boss no longer exist.

The level itself uses a unique arena, with graphics not found anywhere else in the game. It's possible to grab the center platform and move across it, and it's also possible to jump on it (as is probably to be expected).

Despite not being able to see the boss, Flynn and Floyd can still be hurt by it should they touch the collision area (which is usually towards the top of the level). It's also possible to attack the boss, but eventually the boss will run out of hit points and this will cause the game to softlock.

About half of this sprite is seen during gameplay. The bottom is mostly cut off due to the camera being fixed for the cutscene.

Present at the start of the ROM is this credit to two of the developers:

Present at 0xBE61B is a credit to the composer of the sound driver: