Panda is nothing more than a variation of Abscondee with different level designs and a really bad rendition of the boss theme from Battletoads. 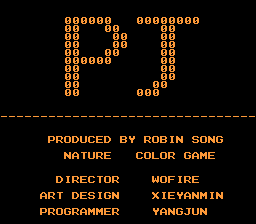 As with many Nice Code games, pressing Up, Down, Up, Left, Right, Left, B on the title screen will briefly display a credits screen. Nature Color Game is one of several aliases used by Nice Code, and PJ most likely refers to the Power Joy series of Famiclones which many Nice Code games have been released on. The credits are largely identical to those found in Abscondee, though it lists a different art designer.