Panic! at the Disco is a truly strange game in which you press buttons and watch what happens afterwards. 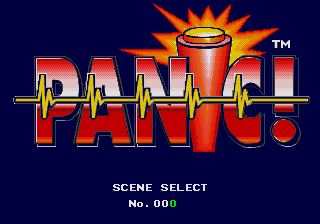 At the title screen, press Right, Right, Down, Up, Left, Right, Up, Up, Left, Down. The Scene Select screen lets you enter a three-digit code to instantly load any of the game's scenes or sequences.

Scene Select code 411 loops an original animation sequence introducing the game, its characters, and the celebrity talent behind it, and is not accessible through normal gameplay. Most of the graphics are unique to this sequence, though it uses a couple of pre-existing music tracks. Presumably this was meant for shops to key up on or around the game's release. (For the record, the awkward English text is in the original Japan release.)

The cigarette vending machine (2-B; Scene Select code 077) and Japanese word processor (9-B; 030) scenes were made inaccessible in the US version; entering their Scene Select codes in Panic! will do nothing, and their associated swtiches in Switch were reassigned to skip ahead to other scenes. The files for the scenes do exist in the US version, but their pointers were dummied out and therefore made null. It's likely their removals were due to content (cigarette imagery and an overabundance of Japanese text, respectively), even though the word processor scene is conceptually identical to the English typewriter in scene 18-C. Not to mention that the Japanese Mega CD boot screen (12-D) was left in.

The US version also removed the "booby trap" scene of the White House being destroyed, substituting a duplicate of the Golden Gate Bridge scene. This is easily evident in gameplay as the status message that follows still says the trap was connected to the White House.

The PlayStation 2 version made several changes: 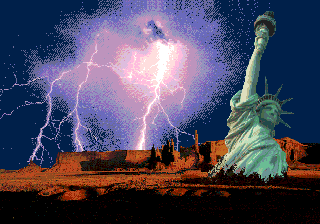