This is a sub-page of Pikmin.

On the root of the Pikmin disc are a few files for a Windows executable, where you can run the game on a PC. It comes filled with a bunch of debugging features, and best of all it's possible to have it run on any modern machine! For a guide on how to do so, see the Notes page. 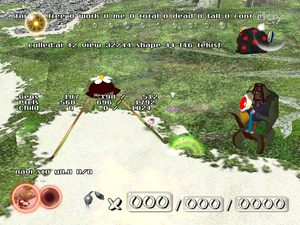 When you run the program, you get two windows: a main game window, just like what you'd see on an emulator, and a control window with a log, titled "OpenGL / Dolphin System". The messages that get added to this log also gets written to log.txt.

Some graphical effects are a bit wrong in the game. For instance, if you press Start on the title screen, the back of the screen becomes really dark except for the main menu.

By default, most things are invisible and behave a bit wrong. You have to access the in-game debug menu and enable "Game-Mode" in order to get stuff to show mostly right. Even still, only one Pikmin will really appear correctly, while the rest will just randomly flicker on the ground. You can see them if you hold the A key or enable Kando Debug from the Kando Options.

On the menus, you can navigate around just like in the actual game, but you can also pull out some extra debugging menus to access more options, with Tab. In-game, you have the regular game controls, except quite a few things are wonky (e.g. Olimar's health always appears as 0). You also get a lot of debugging features in-game by pressing the Z key. No audio plays at any point in the game.

Some objects, like Candypop Buds or Snagrets, have some spheres and boxes around them, which are always visible.

Some random things may make the game crash, like making the day time reach 0, or decreasing the value of debug menu options while in-game. This is due to the debug version of the game not being able to save.

The numpad keys require Num lock to be on. Keys in bold are shared between the regular controls and the debugging features, so be careful not to toggle a debugging function while trying to do a regular in-game action.

On the main menu, there are the same options as usual, but starting the game takes you instantly to the area selection screen, where only The Impact Site is unlocked, and it's in the Day 1 status. The sound volume settings on the options menu also don't work, and changing a language has no impact on the game.

While on the debugging menus, B (B key) closes the menu, A (Space Key) toggles or confirms an option, X (V key) increases a value, and Y (N key) decreases it. 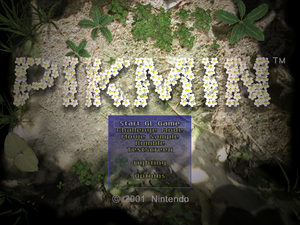 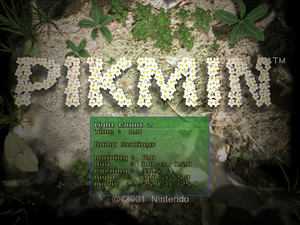 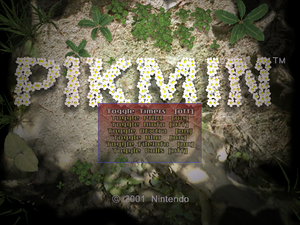 On the main menu, you have the following debug options, accessible by pressing Tab: 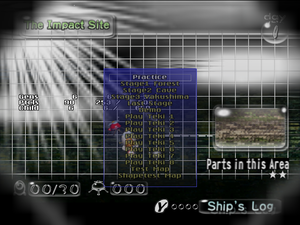 On the area selection menu (and also on the Challenge Mode menu), you can press Tab to open a list of areas to enter. Pressing Y (N key) makes it open the Voyage Log, but close it right afterwards. The following areas are available on the debug menu for the main story mode, which you can "unlock" by choosing the "Open All Maps" option:

The following areas are usable for Challenge Mode. These are just the same as the regular areas. 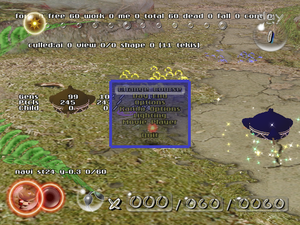 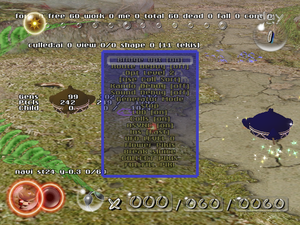 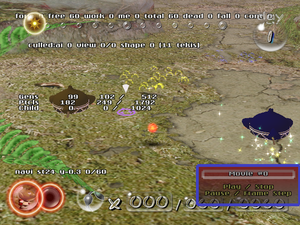 In-game, you can access a debugging menu with the Z key, with the following options:

At almost all times, there are three counters on the left of the screen, with three columns each, and a slash after the number on the second column:

In-game, the number of Pikmin in certain states is written.

Slightly below this information is a set of variables related to enemies.

If you're hiding anything, by having pressed. X (V key), the type of thing you hid will appear under the previous line of text with the format "HIDE #", where "#" is the type. The following types exist, and are toggled in order:

Finally, if you're playing a cutscene, such as landing on an area, you get a "frame = #" counter, and a "movieHeap free = #" counter. The frame counter increases one per frame as the cutscene takes place. The other number probably has something to do with the memory. 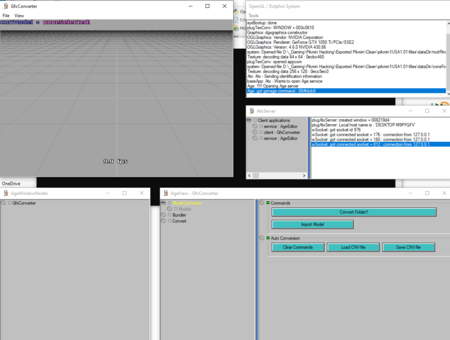 On the "OpenGL / Dolphin System" window, there is a "Tools" menu, with the following options:

The options with "filter" in their name don't do anything. PikiGame starts the main game, but if you choose it while it's already running, it crashes.

TexConv opens up a model viewer. This model viewer has a menu with two options, "File" and "View". View doesn't do anything, and as for File, you can either open a TGA texture with it or exit. The window itself has the framerate at the bottom, and "currModel = noneSelected!" at the top upon opening. Opening this also enables the "timers" chart on the game window, same as if you had pressed F2. Using AtxServers 'Node Preview' section, you can load models, create bundles and export models. Controls are:

AtxServer is a server that allows connections from the other 'plugins' (plugTexConv and plugPiki). If you open AtxServer without creating a direct connection to your localhost using "+direct 127.0.0.1" in the command line parameters when opening sysBootup, it won't work properly. Once opening a plugin, it will connect to the server and, upon clicking the name of the plugin (or "client") will display all current 'Nodes'. This includes, for example, opening model files (dmd), editing them, exporting them, editing the current Pikmin 1 scene by their generation files, ect.