This is a sub-page of Pokémon Red and Blue.

There are several unobtainable items in the games. These remain present and unaltered in Pokémon Yellow.

Following the list of item names, at offset 0x45B5 in the Japanese versions and 0x4A63 in the English ones is a list of the floor names used by elevators. These are stored in the same format as the item names, and as a result can be loaded as items. They lack valid effects, have a placeholder buy and sell price of 0, and have invalid effect pointers, causing all kinds of glitchyness (ranging from a crash to Arbitrary Code Execution) when used.

Starting at 0x45F5 in the Japanese Red and Green are strings leftover from a scrapped badge ranking system. This data can also be found at offset 0x4A92 in the English games, though since they weren't translated they only display as gibberish, due to the differing character tables.

Worth noting is how the word "badge" is rendered as バッヂ (baddzi), rather than バッジ (bajji), like in the final games. This may be due to how the 「ヂ」 and 「ジ」characters have historically had different pronunciations. Historically, 「ヂ」 sounded either like "di", "dzi" (pronounce the "ds" at the end of an English word, and then add an "ii" sound to it) or (approximately) "dgi" (as in edge, badge), depending on dialect. And historically, 「ジ」 sounded (approximately) like "zhi" (as in massage, "mirage", collage). As such, the original choice of 「バッヂ」 over 「バッジ」 may have to do with the fact that the 「ヂ」kana was historically a slightly more accurate rendering of English "dg" into Japanese.

There exists a second set of HMs directly following the regular TMs, which are numbered TM51 through TM55. They behave like regular TMs, so they can be stacked in the inventory as well as sold at Poké Marts. Irrelevant data is interpreted as their price, since the last defined price is for TM50.

There are coordinates for a hidden Max Elixer at coordinates (14,11) of unused map 0x6F, for which there is no map data.

The hidden coin item on the ground directly three tiles above the top-left slot machine on the cluster of machines that is the second from the east side is supposed to give you 40 coins. However, due to a typo in the routine that handles picking up hidden coins, only 20 coins are found instead. 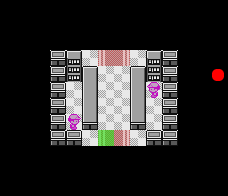 In certain areas around the Safari Zone entrance, using your Itemfinder causes it to tell you there is a hidden item nearby, but this item is actually unobtainable. The item is a Nugget located at the coordinates (10,1), which is outside of the map boundaries, and leaving said boundaries would just cause the game to crash. This suggests that the map was changed during development without the hidden item having been removed, as hidden item data is separate from other map data.