As Angry Birds GO! was Rovio's first 3D game, it's understandable quite a few things changed between the early and final versions.

In this preview video, many differences can be appreciated:
- The lighting is different.
- Mechanic Pig has a different, dopier model.
- Chuck turns into a rocket(!) when he uses his ability, rather than simply slowing down time.

Despite this video being uploaded after Angry Birds GO! saw its initial release, a good portion of an early version of "The Big Stunt" from the soundtrack can be heard, with the primary difference being no ambient noise in the background as well as the vocoded voice being instead an overdriven guitar.
The birds also seem to use the incorrect voice clips, although this could just be an editing oversight.
During the telepod demonstration, what appears to be a mockup clip is used.

During this ad, a few seconds of gameplay can be seen toward the end - the most interesting thing about this clip is that Seedway karts are used rather than the proper Rocky Road karts. While this may be due to the Rocky Road karts simply not being finished yet, it may also tie into how originally any kart could be used on any theme, but they would not perform as well. The statistics to support this theory could be seen on the Angry Birds GO! Countdown app.

On October 31st, 2013, a countdown app was released in anticipation for the game's planned December 11th release. Ironically, the full game was actually supposed to be released on October 31st as printed on many of the telepod boxes. This app was primarily to preview the karts that would be available in the full game via telepods, but also has an interesting last-minute name change within. 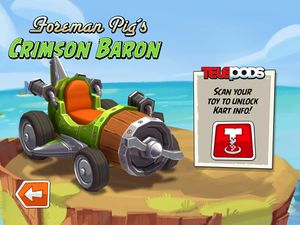 The Crimson Baron, known as the "Green Baron" in the final game was the original name of Foreman Pig's telepod kart before it was changed, presumably to remove the connection with the remarkable WWI-era fighter pilot with a similar nickname, the Red Baron. Strangely, by this point in development, the texture had already been changed from red to green, though the name remained unchanged. 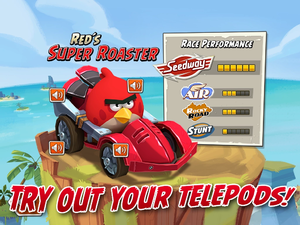 It seems at one point it was planned that you could use any kart on any theme, but with the downside of said kart not performing as well in the alien themes. Considering this idea made it all the way into the countdown app, it's safe to assume this idea was scrapped late into development.