Angry Birds Go! is a kart racer built off Exient's XGS engine. The game was really good with optional IAPs, but controversial decisions were made in later updates and made many prefer the old versions of the game.

A Debug Menu screen going by uidebugmenuscreen.xml in ui/xml.pak is present. Public builds of the game do not have a screen nor a function to load it normally, thus a modification to an existing screen must be done to load it. 12 items are displayed on a single page and the blue buttons go up/down one row and the same goes for the green buttons but for pages. 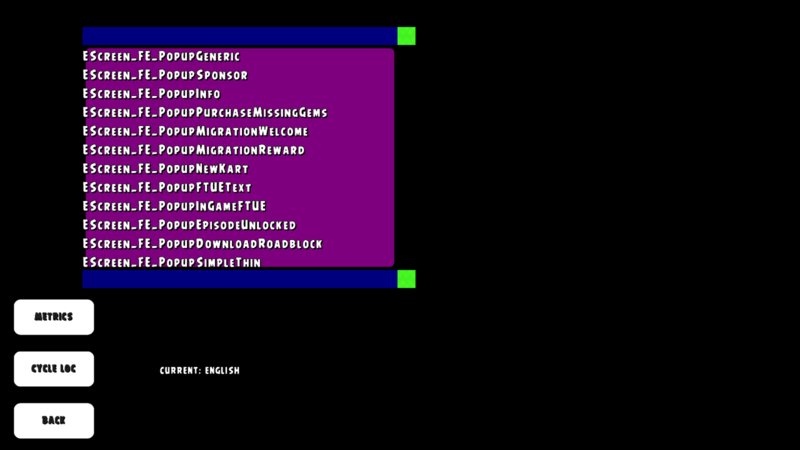 After choosing a screen, an overlay exists with the following option.

These strings exist in the localization file:

Game executables have these strings while some are exclusive to V1.

A debugging feature tweak list is present in gameplay/misc.pak/ and is named: DebugTweakables.xml. It has a LOT of tweaks that are enabled (aside from true debugging tweaks) on every game bootup, even for a retail build, some code isn't present in the library and/or the XML logically, anything in XMLs ONLY from the Library can be used as settings are called from it and not the XMLs alone.

In-game debugging buttons are mentioned in UI.pak, in the XML directory, but they are hidden from releases.

The file debugtournament.xml in xml/tournament.pak has a lot of debugging tournaments for Chinese New Year, named DCNYXXXX (with X's to replace), for debug tournament selection.

If the game detects a missing string that the game expects in a file, it will say !MISSING STRING!.

In the character icon image ui_core.pak/textures/uicharacters_1_of_1.xgt (V2), there are complete icons for a Minion Pig for both the character select or daily challenge popup in v2 and online multiplayer team list in the v1 series before v1.13.9 as reserve drivers for players to replace them. There are also most unused sounds for them meaning Rovio was likely planning to make it possible to play as one, the character's script file is characters/charxml.pak/char_015.xml and it disabled the character as its instead used an AI rival. The character uses some of Foreman Pig's code, also used Red's ability icon for the ability icon outside of a race, however has none coded, V1 also a similar player icon, there's also no animations programmed for use or directories of them for the character. 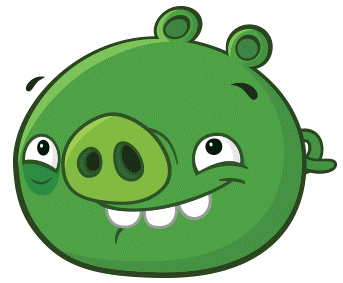 In one of the character script files: characters/charxml/char_016.xml, there's a mention for Dealer Pig and the script disabled the character, it is partially based on the unused/AI Minion Pig but preferably based on the Foreman Pig, it also used Red's ability icon outside of a race, there are no plain icons or sounds for this character during a race or at the showroom. The character is named MOUSTACHE PIG, the icon outside a race is Moustache Pig's in-race avatar from V1, stretched out to fit, the name of the character inside a race is not known in the game files. The ability he has is an instant explosion, but it unfortunately has no hitboxes, making it useless, it also has no icon during a race... Another thing is that the character "floats" over its vehicle, both during a race and in the showroom.

Senna Bird is no longer playable as of the v2 update, most textures, all animations and the character script for him still exist, not all sounds are programmed to play, only sounds for showroom idle, pre-race, some race sounds and win/lose race are present, the texture of the character is a black square, likely meaning not in the game files, the ability icon in races is also not present but the ability also works completely fine like before.

Senna Bird in his helmet is no longer playable as of the v2 update, most textures, all animations and the character script for him still exist, not all sounds are programmed to play, only sounds for showroom idle, pre-race, some race sounds and win/lose race are present, the texture of the character is a black square, likely meaning not in the game files, the ability icon in races is also not present but the ability also works completely fine like before, the map icon also is missing.

For whatever reason, the music that played in Versus mode, known as "The Big Stunt" in the soundtrack, was replaced after some time (by aby_music_dlc_1), however the original audio file that was used is still present.

In all versions of the game, there is also a blanked (1 second) audio file in the game's music asset folder (or music_core.pak on newer versions) called aby_music_crash. Given its vague name its purpose is unknown, although it could have been meant for another game mode. Unfortunately, the XMLs or game's executable code doesn't mention anything regarding this file, making the file either act like a "dummy" or information/mentions of it are internal and not publically revealed.

A ton of assets are left over, including textures, boss events (rounds 2 & 3), Slalom events, and more.

A few test events are present in gameplay/eventdef_other.pak.

A test on Rocky Road for the Seed Rush game mode.

A test on Rocky Road with bumpy road for the Seed Rush game mode.

A test on Rocky Road with bumpy road for the Race game mode with a ton of coins.

Similar to eventdef_dummy.xml but for a boss battle.

A test for a quick Multiplayer race.

A test event for the Race game mode, for testing track items as Red, the description says: A simple test of the xml based track item configuration system and the event is tagged: 01TE.

Excluding powerups no longer being used in v2 from v1.

A powerup going by: POWERUP_LEAF_BLOWER is present in only v2 libraries of the game, it's not coded in any XML file.

The game was likely planned for some time to computers (or Steam) but it was cancelled likely for the favor of mobile devices, the game library mentions PC DRM, including the DRM server URL, links and protocols.

In the game's ui_core.pak and screens.pak, a file called xgsconsole_log.html is present in the textures directory and the root of root of the other, it shows an error message log regarding XGSCore.

pigLabCraftPulse is mentioned and used for the present in the results screen but there's no Pig Lab in the game, but Angry Birds: Transformers, suggesting it was used unknowingly.

A latest.meta file is present in the crashes directory in the majority of extracted game directories. Most likely this is a build for development only.

The Windows Phone versions have a debugapi.xml file in the root of the game executable.

The asset list (XAL) files have compilation metadata after the assets for the game to use are generated, since it is partial, the full content is not possible to fully recover, they range from bits of compiled shaders, source file directories and web addresses.

It's possible that the unfinished word is cloudassets, mistassets or smokeassets, suspended content servers of Rovio.

In many XML files, there often are developer notes for setting up the XML assets or notes saying what the asset means, one goes by: CUP (awaiting design), another goes by: Workshop no panel required, should link to upgrade screen, Hey kids, this is advertising and possibly many more.

The Rovio logo when booting up the game is used but as of V2, an Exient texture that does not get used was added! It's possible the developers were continuing to pack assets of ABTF into the game as the logo does get used in that game while also being virtually identical there. 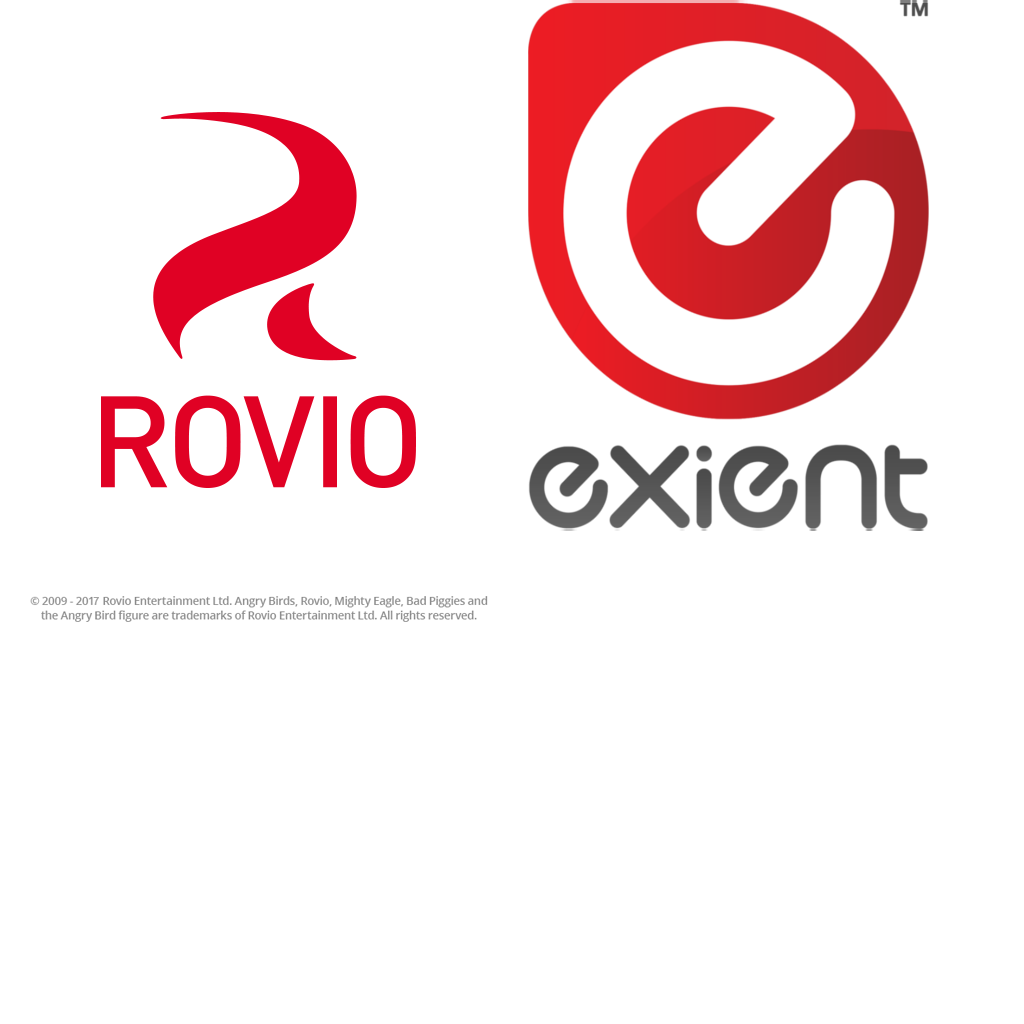 The XGT file only has one texture, a rainbow birdcoin, given by the atlas file, it is named abk_test.png. It is oversized by a medium sized portion.

The texture in the base game only has three textures, a checker-boarded square with many dots as well as Red, Chuck, Bomb, and one of the blue birds in their Classic designs. Given by the atlas file, the checker-boarded image is named dummy.png, Red is bird_red.png, Chuck is bird_yellow.png, Bomb is bird_black.png and the blue bird is named bird_blues.png. It is oversized by a decently sized portion and very low quality. It's possible the textures were likely used as character avatars according to the file names but was likely rejected for the current ones used. Despite being unused, it was updated in V2 to remove a possible oversight in compiling the texture and changed the order of the individual textures. 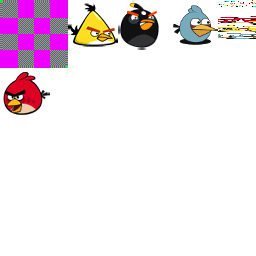 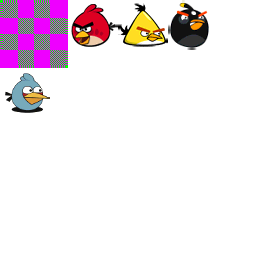 The ETC1 compressed XGT file only has one texture in a 1024x1024 image, an unused image for loading a match in single player, it is named loading_background_sp.png and it is oversized by a decently sized portion, the file loading_tbm_cmp_noalpha.atlas also has this image used in the exact same size and compression. It is possible to load this from navigating to the new user screen and clicking GO! on an existing save before crashing. 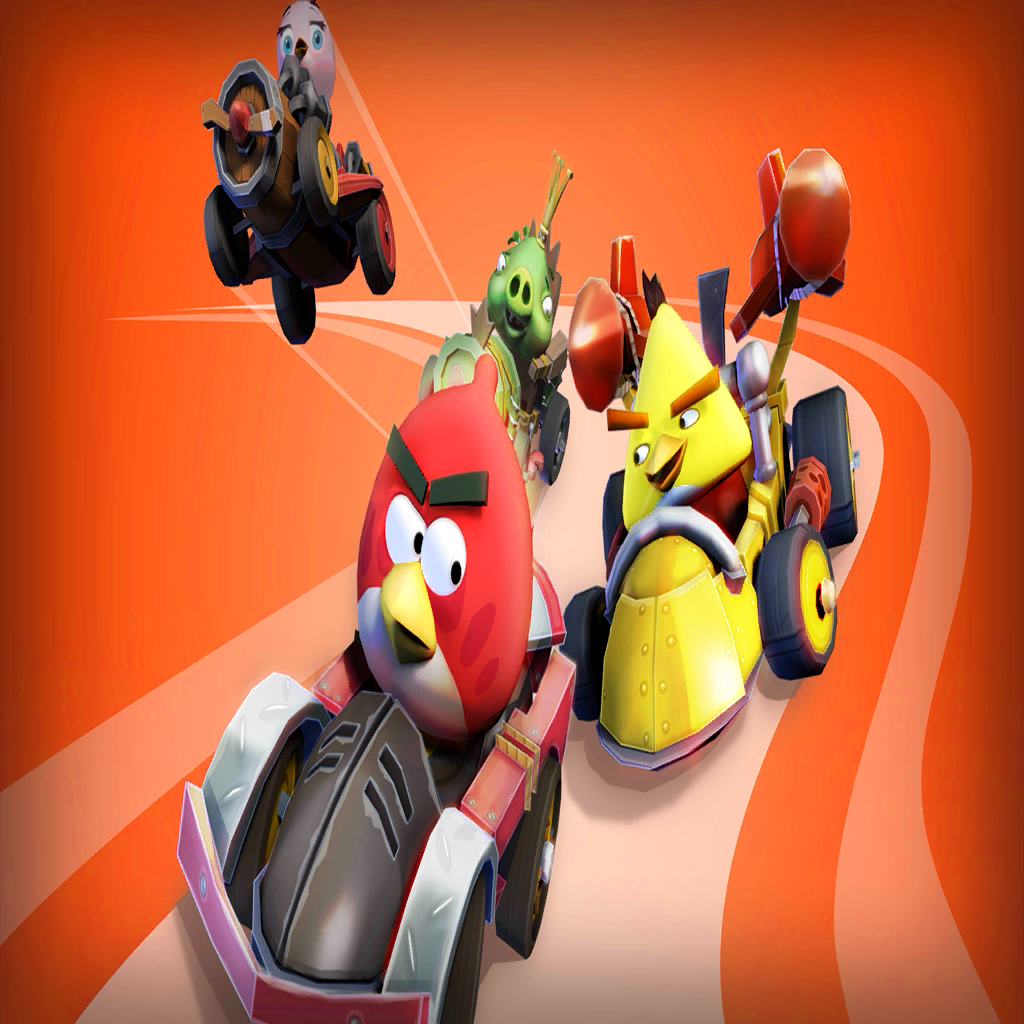 The uncompressed XGT file in data/effects.pak has the Exient logo on a black background.