This the first of the many official online Angry Birds Flash games from Rovio, being the one that replaced Angry Birds Flash in its development cycle and its finalized Flash engine with its assets was reused countless times as a base for other titles, which explains why countless leftovers are present in them. The community made hard efforts to preserve releases of the game after the majority of content servers have been wiped and eventually made it possible to play archives of both the 2012 and 2017 versions of the game despite the discontinuation, the previous also with Green Day. The game itself didn't get discontinued, but got superseded into a Unity engine remake, removing some features and all exclusive levels many fans adore.

Assets and code for the TNT Drop and Pumpkin Drop powerup are still present in the game's files but disabled and work fine when forcefully added.

The game has a portion of leftovers from the Flash Player 11 tech demo that was shown off at Adobe MAX. The demo shortly became this game.

The file AngryBirdsGoesTo11.swf is present in external_assets, having no use by the game, it is used as a splash screen before loading the game. 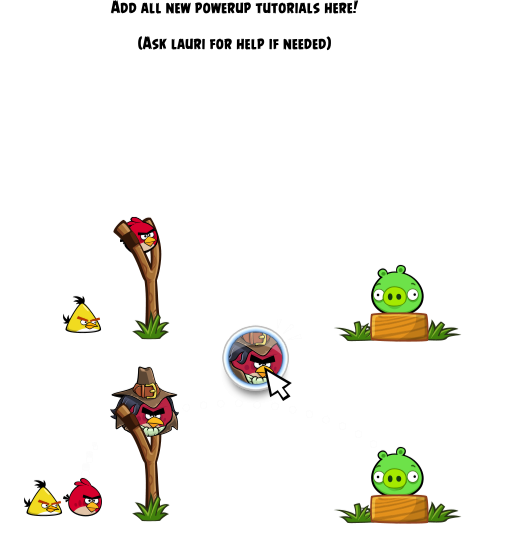 A note on adding new powerup tutorials. It recommends you to ask Lauri for help on doing so when necessary.

Unsurprisingly the same cheat keys and FPS display is present. As usual setting DEBUG_MODE_ENABLED in the AngryBirdsBase / AngryBirdsFP11 (Older) and AngryBirdsEngine class to true enables them. Interestingly level locks can also be ignored with that flag on, but Golden Eggs are unaffected.

Setting USE_DEBUG_SPRITE to true in LevelEngineBox2D makes the game render collision boxes overtop launched birds, materials and pigs. It's wise to scale the game to match the collision box offsets instead of using it in full screen as they become inaccurate.

The game has code for detecting presses of "5" and "6" on your keyboard with debug mode enabled in a level, however both keys have the exact same function used, simply reloading the level. The 2012 version uses "4" and "5" instead.

In published asset lists of newer versions of the game, a file called AngryBirdsFacebookTests.swf is always listed and present on the related servers but not used by the game in any way. Manually downloading and exploring the file reveals it is another build of the game, however with extra classes and functions (minus the AngryBirdsFacebookCanvas class) and also entirely free of obfuscation with nearly all variable names, as well as source compilation directories for most scripts. * can be AngryBirdsFriends, RovioFramework, AngryBirdsEngineBase, AngryBirdsEngineSpace, AngryBirdsBase, Starling or Box2D.

Another directory mentions a developer. 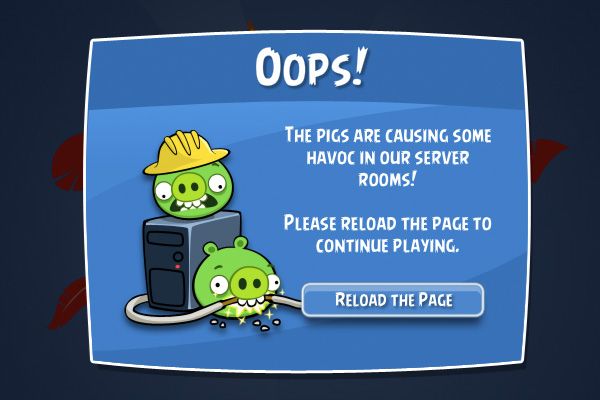 There also second error popup when game was updated but screenshot are lost. 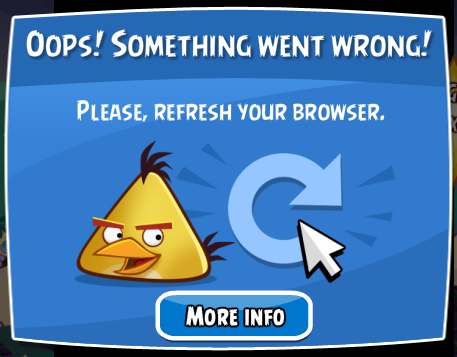 The third error popup was shown in latest Flash version before Unity version with mobile's error popup got ported.

The game internally is called Facebook with AngryBirds before that word, which makes sense considering the game's public beta title was Angry Birds for Facebook.

The game's code has a class called "AngryBirdsFP11" (Or "AngryBirdsBase" in newer versions), the class that the canvas usually loads is "AngryBirdsFacebook" (which is based on it). Upon swapping some assets to ones from other games that use the same engine, editing the XMLs inside the SWF and loading it reveals an unused menu, similar to the one shown in the Adobe MAX tech demo. It uses a different in-game HUD.