Angry Birds is an award-winning strategy game for multiple platforms, but mostly known on iOS. This article pertains to the PC version, which makes more sense to use on a laptop.

Even though the Mighty Eagle is exclusive to mobile devices, the graphics and sounds for it can be found. This suggests that this feature may have been planned at one point, although they could also be nothing more than leftovers. 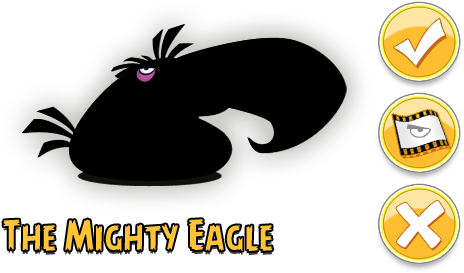 This screen (found in "data\images\pc" of the game's directory) is what would've appeared when the player clicked on the Mighty Eagle icon (in the main menu, or the Power-Up Shop). The roll of film with the Mighty Eagle's eye led to this video.

Notable in this sheet is what appears to be the original name for the PC version, "Angry Birds HD". However, the iPad version is called Angry Birds HD, so this may have also been a leftover from that.

This can of sardines is how the Mighty Eagle gets summoned. Once the box is launched, it disappears and then the Mighty Eagle dives diagonally towards it, then bounces off the screen, destroying everything in its path. Any pigs are self-destructed if they survived.

The Mighty Eagle entering and attacking once it appears. Note that these are supposed to be blurry, as they are blurry in-game.

The Mighty Eagle bouncing once it hits the ground.

The cartoon sound effect that plays right after the Mighty Eagle makes its battle cry.

The Mighty Eagle's battle cry, which exists in two files: mightyeagle.wav and mighteagle.wav. The duplicate's existence appears to be a simple mistake.

This image's name is "SHOP_NEW_ME_BG.png", so it might've been used in the store.

There is an eagleDemo level in \data\levels. This might have been used as a power-up tutorial level in the mobile versions.

This James Bond-esque remix of the title screen music can be found in the music directory with the name funky_theme.mp3. This can be legitimately obtained in the mobile versions by getting three stars on all the Mighty Hoax levels and finding the secret in the Angry Radio Golden Egg.

In one of the updates, the game's main theme was replaced with Angry Birds Trilogy's main theme to celebrate the chapter "Red's Mighty Feathers", where Red finally gets a chapter-exclusive ability. It was then reverted back to the original track. 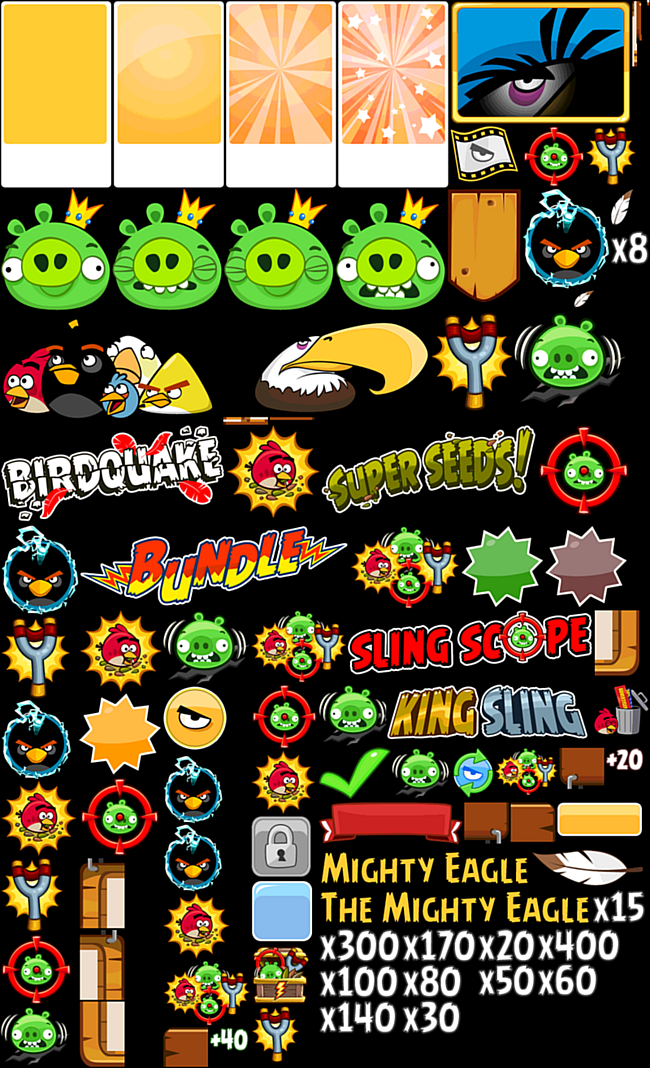 Icons for the powerups from Angry Birds Friends (aka Angry Birds Facebook), which includes the shop images, as well as some placeholder graphics. They can be found in one file. Like the Mighty Eagle, these features never came to this version. There is also a lock button (iPhone retina Display) that is unused. That appears in BUTTONS_SHEET1

The music was used in the oldest version where the player completes the game. This was replaced by the ranking system from Angry Birds Rio and like above, this song is still in the current version files.

Located in data/audio/sfx, a sound of a c minor note being played with a organ.

Found in BUTTONS_SHEET_1.png (Or BUTTONS_SHEET_2.png), there is an icon for Chillingo's now dead Crystal SDK service, which was used in the iOS version where you could track scores via it's leaderboard, get achievements, etc. It was shut down on June 23, 2013. 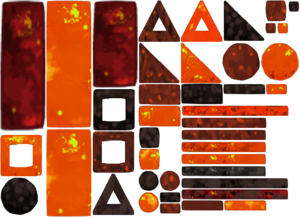 Unused blocks from a update that never came. There was also sprites for a Fire Bird and burning/charred pigs found ingame.

Among all the button icons, there are a lot of icons which were not used:

This golden egg sprite has the Intel logo engraved in it. An Intel-themed Angry Birds game was made for promotion, with some of the levels appearing in the Android version of Angry Birds Seasons. Maybe it was planned to appear on this game too. It is possible to view the levels themselves by either replacing already playable levels with them or by enabling it from editing the LUA game code files. There are 5 Intel Golden Egg levels in total. Here are the levels themselves: 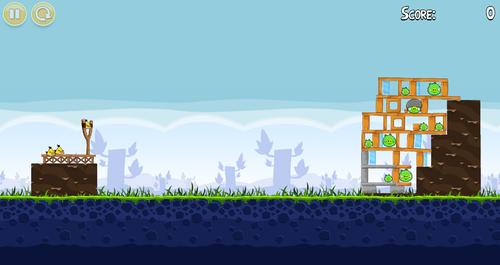 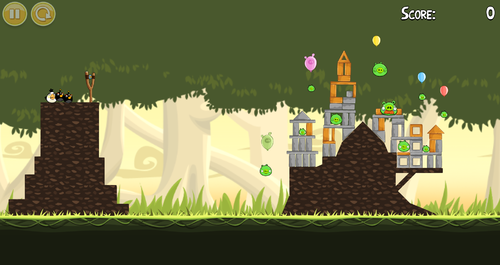 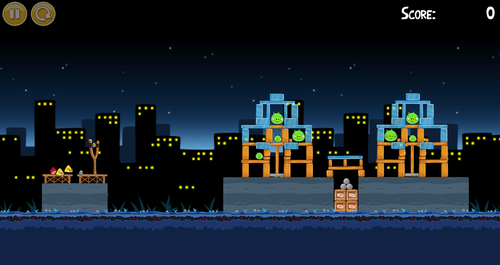 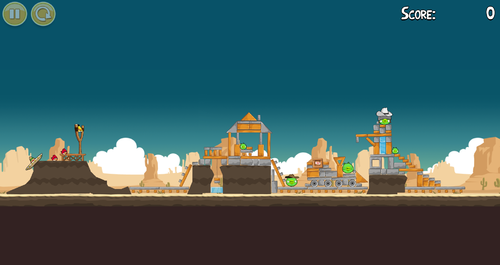 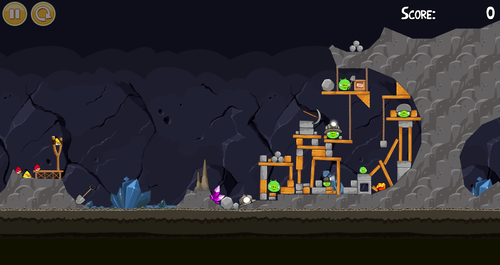 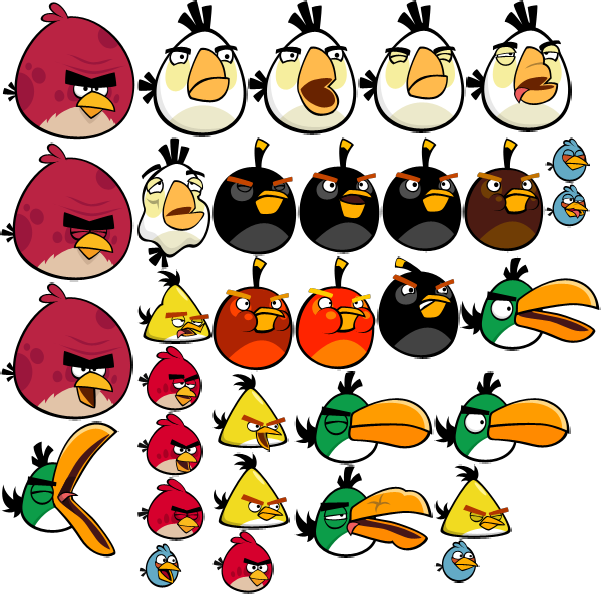 While the first five birds (Red, Blues, Chuck, Bomb, Matilda) and Hal were used, their 'hurt' sprites were never used. Same for Bomb's exploding phases, wide-mouthed Hal and Terence. This was added in v3.1.0.

Sprite-sheet for the Bad Piggies promotion. This is supposed to be animated. This was added in v2.3.0.

This pair of arrows were included in the birds and pigs' (INGAME_BIRDS_1) sprite-sheet, and are likely a leftover from the developer kit. It can be seen in this video at 4:25.

Red's sprite when he uses his ability. In Chapter 9, Red gets a special ability. While it does show up in the tutorial screen, this never shows up when used. This is also used in (INGAME_BIRDS_1).

A rectangle bubble-like sprite and its particle sprites. Code of it present in older versions shows it was supposed to make objects bounce on it and make birds stick on it.

Some weird block sprites are present in the blocks sprite-sheet that were never used in-game. 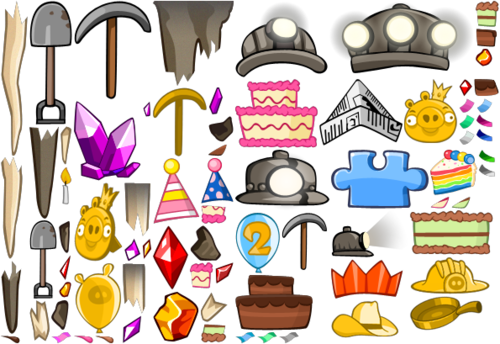 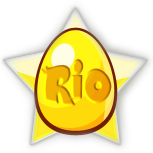 A sprite for a golden egg with a star, with the movie name Rio engraved on it. It appeared when you finish the golden egg #22 level, replacing the star. But, as the level complete screen was changed, this also got unused.

In the game's asset directories, there are Lua files for debugging the game, some debugging code is also present in pre-existing Lua scripts not titled as debugging features, these are shown by the game's build settings in options.lua.

If an LUA is modified incorrectly or calls something that has or causes errors, the game will show an error about it, options are to ignore, abort or retry, if the file is too major that is having the problem, the game likely will force you to exit/crash unless the file is fixed. If the game memory is modified based on bird counts (?) the game will show an error: Next bird not found! Please make sure all birds are correctly numbered for each level. Call stack: INFO... 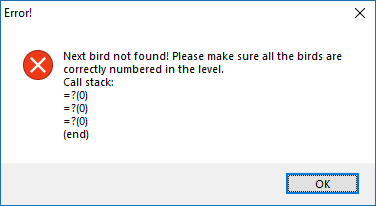 If developer cheats are on, these can be used during gameplay.

A display on the bottom middle of the screen, for the FPS and memory in MB is visible, showFps is the internal flag name if using the Debug Console to enable.

A giant overlay for both logging and entering text, covering the entire screen, called and hidden by by Shift-D it is possible to edit in-game flags and values for a session by using it, the same way for loading it on mobile releases (Right corner multi click) is also a method to load on the PC version. Using @ in your entry will close the debug console after it is entered. Also, using launchMightyBait() in your entry will use mighty eagle without purchasing and probably using bundleReward(?) in your entry will receive powerup reward, works on mobile too. Just replace "?" with number amount. 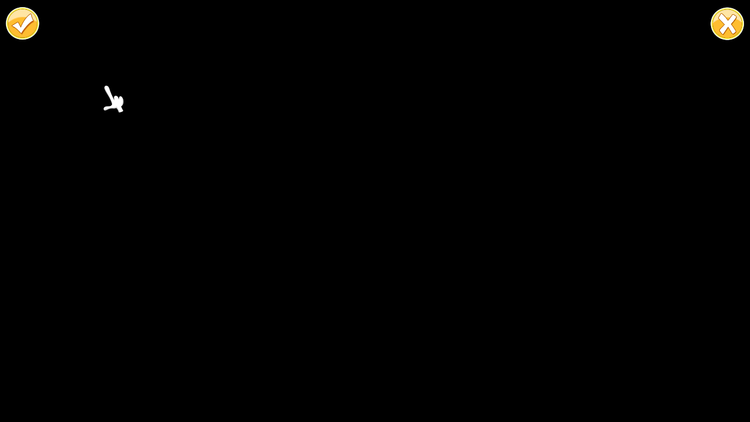 In the current Angry Birds versions, scripts alone is only present, on PC and old versions, scripts and scripts_common are present, certain DRM files are only present on the PC version of the game, but are mentioned in current versions, LZMA packing is used after v6.0.1 but the PC version beyond v2.0.0 maintained 7z encryption for containing assets, WAVs, OGGs and MP3's are only supported. v1.0.0 used encrypted assets alone.

Leftovers from other versions

This image is located in \data\fonts\1024x768\FONT_MENU_IPAD.png. It is used to show the current level's number when the game is paused.

These files are for the Mattel Apptivity King Pig toy, which can be used to unlock special content in the iPad version. The King Pig sprites are used for level successes and failures. This content is now unlockable as of version 2.2.0 (v2.3.0 and newer if on iPhone, Android, MAC, and PC).

These are some files from the toy's splash screen. 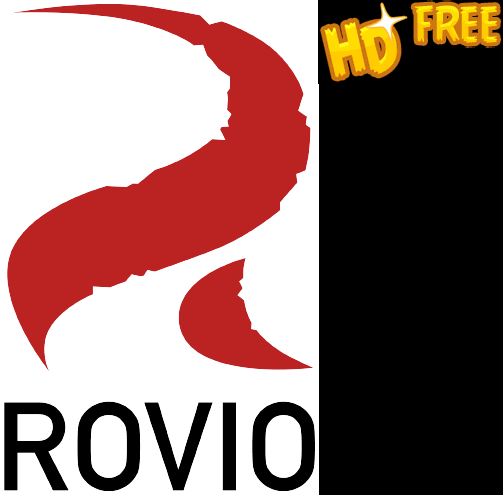 This image contains the used Rovio logo, and the words HD and Free. There is no Free version of Angry Birds for the PC (the unlicensed version does not use "Free").

This button was used in the mobile versions to the now shut down Toons.TV service. It never came to PC.