Angry Birds Space is what happened when Rovio looked at Super Mario Galaxy (and the 500,000,000 other "_ IN SPACE!!" things that were popular at the time) and said "Pfffft, we can do that!"

There is a music track called "AB_space_level_menu.mp3" which would've likely been used when selecting a level.

An unused version of the tune that plays when you get three stars, with a drum roll in the background. The final one is split up into three separate sound files for each star.

An early version of the ambience from Pig Bang, with a major difference being a short bass track at the beginning.

There are 4 sounds likely related to the black holes that open when getting an Eggsteroid. Either that or an unused black hole bird/power-up, due to there being a sound titled "blackhole_shot". The latter seems to be proven by the existence of data for an unused bird called Black Hole Bird in the same version.

There is an audio file called "bird_06_flying.mp3", which is a combination of two of the bird idle sounds. In the original Angry Birds, this audio file was a sound from Hal, though for some reason it was changed in Angry Birds Space. Perhaps this was a placeholder sound for Hal, and Angry Birds Space's development had started when this sound was still Hal's launch sound.

There are many leftover sounds from the original Angry Birds game found in version 1.0.0, which didn't get used in Angry Birds Space.

A sound for a ball bouncing. This may be a leftover from the ball objects in Angry Birds.

A sound for a balloon popping.

There is a leftover sound of the TNT explosion from the first Angry Birds game.

There are 2 leftover sounds of Red being selected and launched.

There are leftover sounds of The Blues being selected, launched, and colliding with objects.

There are leftover sounds of Chuck being selected, launched, colliding with objects, and using his power.

There are leftover sounds of Bomb being selected, launched, and colliding with objects.

There are 2 leftover sounds from Angry Birds of Terrence being selected and launched.

There are leftover sounds for Matilda, who doesn't appear in Angry Birds Space.

There are leftover sounds for Hal, who like Matilda, doesn't appear in this game.

There are some objects in levels that are hidden off screen. 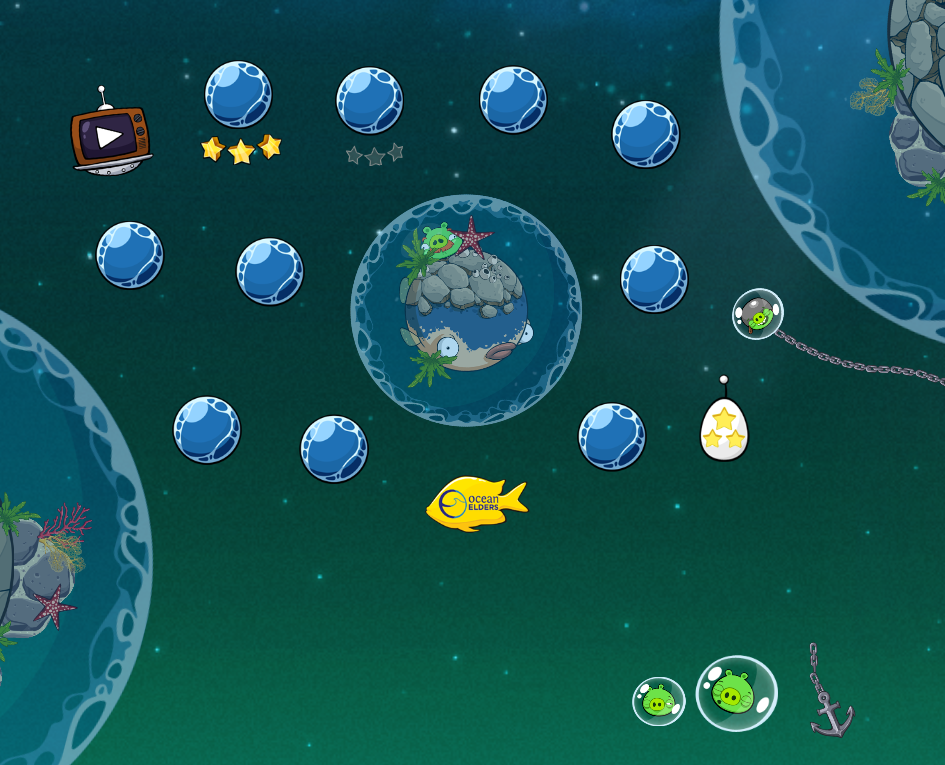 The level select screen for Pig Dipper has 2 pigs in bubbles and an anchor hidden below the first screen.

There exists data for some unused birds.

Located in version 1.0 is data for a Black Hole Bird. It is strong against wood, and would've likely spawned a black hole that would suck up all blocks and pigs in a small radius for a short period of time. It has references to 2 sprites, being "BIRD_BLACKHOLE_NORMAL" and "BIRD_BLACKHOLE_SPECIAL". Sounds for it seem to exist, which can be seen above. This may have been replaced by the Space Egg power up which was released later.

In the same version as the Black Hole Bird, there is data for an unused Homing Bird. It likely would've acted like Laser Bird, homing in on wherever is tapped, and it may have been an early version of it. Like Black Hole Bird, it is strong against wood. It has references to 1 sprite, being "BIRD_HOMING_FRAME_1".

An unused object based off the warp pipes from the Super Mario series. This object was meant to appear in Eggsteroid 2. The object uses the stone material and has a strength of 30. 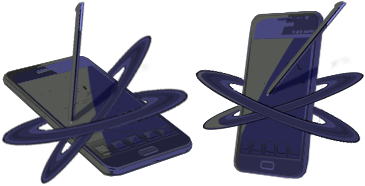 With releaseBuild set to false, these are usable:

Most cheat keys and assets are removed from the majority of releases.

The Windows 8 version however, has a small number of them.

With cheatsEnabled set to true, these are usable:

If the game is not a release build, the game will show a cog button in the top middle, touching it will show a menu with debugging functions: 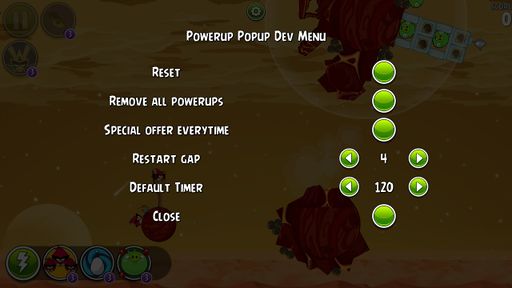 Four source files likely from the pf namespace of Fusion for the Android platform were left in the package root of version 1.3.1 for Android. Fusion is Rovio's private version of the KA3D engine with lots of modifications.

A similar JSON file from Angry Birds Seasons made it's way in HD version 1.3.2 for Android.

The BlackBerry Tablet version left a .svn subdirectory in the assets directory, with a tiny amount of information about where the app icon and splash screen's assets were from.

Since the version control expects you to be connected to Rovio's internal server, you cannot access the revision history of the repository.

We can get a glimpse of the properties of these files/directories by running a Subversion command such as svn info -R --include-externals in the /assets directory.
NOTE: Since these files are in an older version of the format (format 10), the command svn upgrade has to be executed before the one above if using newer versions of Subversion.

All of these files and directories were last changed by Antti Alho, credited under the "Post production" team.
The revision number for these leftovers are 92626.

The revisions of the files in the folder are byte-to-byte identical to the used versions.

Versions 1.3.1-1.4.0 HD for iPad, have a script named *.lua in the images directory. It only has roughly just the below content:

The PC version stopped receiving updates as of v2.0.0, the only other distribution source used was Steam as its own version and it ended at v2.1.0.