From The Cutting Room Floor
< Prerelease:Banjo-Kazooie
Jump to navigation Jump to search

This is a sub-page of Prerelease:Banjo-Kazooie.

Following the demise of Dream, the team had spent the early part of 1997 working on the 2.5D platformer Kazoo. Everything changed about two months in, however, when Nintendo offered them a look at their premier N64 title, Super Mario 64.[1][2][footnote 1] For the team, the footage was a wake-up call:

"It was like, clearly... our technology [...] looked really old in comparison, and literally overnight we just thought 'That's gonna be the future of what 3D games are gonna look like'."

As that generation of games would prove, he wasn't wrong. And so, Stamper and Mayles decided to shake things up yet again and bring the game into full 3D.[3] Within a week, the team had scrapped everything, overhauled the graphics engine (no more mesh system), and had the game's first "recognizable" level[footnote 2] in a playable state.[1][4] Its name would change again to reflect this-- from Kazoo to Banjo Kazoo.[3]

It is here where the game starts to resemble its final incarnation. Development from this point onward was described as "like pushing [a] boulder down a hill", as everything began to come together.[4]

"We suddenly had impetus, there was direction, everybody was committed..."

Ever since the original Donkey Kong Country, Rare had gained a reputation for employing various tricks to squeeze as much performance as possible out of their platforms, and Banjo was no exception.

The characters were originally intended to be voice acted, but the team decided not to go through with this after realizing how much dialogue they had actually written, the recording of which would have cut extensively into development time.[3] Additionally, there was some fear of botching the effort, as voiceover was still a relatively new concept to video games, and they felt the subpar acting seen in some titles "didn't [...] add to the experience".[5] As a compromise, they settled on short grunts played at various pitches to convey a character's voice and personality without the drawbacks of full voice acting, giving birth to the now-famous "mumble-speak" associated with the series.[5]

Adding onto this, the team "thought it [would be] funny" if the characters sang as well (an idea going back to Blackeye's introduction in Dream). Banjo and co. were initally going to introduce themselves in song during the "hoedown" sequence, but the notion fell by the wayside during development and ended up unused.[7]

"We swapped to a witch because she promised that she had more levels in her lair than the giant had in his castle. She claimed her levels were really good and the players would love them, whereas the giant was little more than a hopeless fool who was still trying to construct level 1."

While Banjo, Kazoo, and Piccolo naturally made it across from Kazoo, most of the final game's characters only debuted in this iteration.

Mumbo's Mountain is more of a jungle-like area in this build. 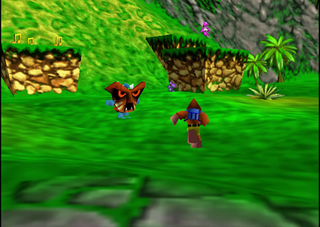 A masked enemy standing in a T-pose which appears to be an early design for the Grublin enemies.

Only a few seconds of this level is shown. Unlike the rest of the levels, this one doesn't appear to be too different compared to the final.

This level is the one with the most drastic changes compared to the final. It appears to be in an extremely primitive state, using default assets from Spiral Mountain/Mumbo's Mountain. It was changed into a sewer in the final game. This level was first seen in some very early footage of the game along with its early theme, later used in Donkey Kong 64's Fungi Forest. Clanker himself appears to also be in a critically primitive state; not only is he rendered as an organic shark, but he barely looks textured.

The early version of Bubblegloop Swamp looked more mountainous than in the final. It also takes place at dusk rather than at night. This level also appears to be in a fairly primitive state, with many untextured and rough objects.

An area shown that isn't in the final game. This area was first seen in some early footage/screenshots and was long thought to have been a scrapped area known as "Giant's Lair". In the Rare Revealed video, it was… well, revealed, that this was just a test map. It consists of various stone structures that Banjo can jump on. There appears to be a massive wood fort built around the level to act as the level barriers, and has a large gate situated in front of the main structure. On the top "floor" of the main structure, there is an untextured doorway. No other objects or enemies appear to be in this map.

Retrieved from "https://tcrf.net/index.php?title=Prerelease:Banjo-Kazooie/Banjo_Kazoo&oldid=1160640"
Categories:
Cleanup > To do
Cleanup > Works In Progress
Subpages