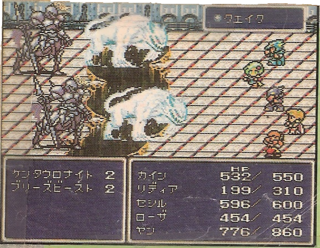 This party is impossible in the final. The closest this party can happen is the first Tower of Babil dungeon where your party consists of Paladin Cecil, Kain, Rosa, Yang and Adult Rydia. Despite this, the Tower depicted in the screenshot cannot be Babil because the enemy formation is exclusive to the Tower of Zot, Golbez's offscreen flying tower where you save Rosa.

In addition, Rydia cannot normally cast Quake as a child without an absurd amount of power-levelling, especially not with that HP level. It should be noted Cecil's HP is that of when he becomes a Paladin, so it's possible this screenshot is entirely a fabrication to avoid spoilers.

Many sources seem to indicate Edge would have had different hair and a completely different palette design.

The earliest design (on the left) seems to have Edge with brown hair combed backwards, with a gray cloak, dark green or teal armor and shoes, and cream-colored pants. The second design (in the middle), used on the game's Japanese box art alongside "Warrior" Cecil, is an evolution of this design, cleaned up with bright green armor and a blue cloak. The final on the right, used for the GBA port, shows the correct colors, indicating the former two designs are definitely not the final ones, although the hair is still not accurate to the original in-game sprite.

Finally some mockups of the original sprite, recolored to resemble the two prototype designs.

A sample page of this guidebook is floating around showing some interesting gridded plans for menu screens. In those are some prototype character portrait designs!

The first mockup is an early version of the screen asking where to save. In the final version you are taken to a far more contextual screen showing all four save files with character information. The default character class is あんこくきし (Dark Knight), and the character name is... ザリガニイル (Zaliganiel), a name that never appears in the game! The text in the upper left reads "New Game", "Save 1" through "Save 4"; the bottom text reads "このデータでいいですか？ はい いいえ" which translates to "Is this data okay? Yes No". The final text reads "まえのデータをけしますか？", or "Do you want to delete the previous data?".

Most interesting is the character portraits, which all have differences from the final game:

Yang's head is angled differently, and the prototype artwork seems like it would be too large to fit the reserved space, but otherwise the prototype portrait is very close to what was used in the final game.

This portrait is nearly identical to the final game's, barring some spiky hair on the right side of her head.

This portrait is completely different from the final game, and seems to be of very poor quality compared to the final portrait, with a very low mouth and a lot of forehead exposure.

There isn't much here, but the contour of his hair doesn't seem to be as detailed as it is in the final game.

The only differences here are that the party member sprites aren't put into a box in the mockup, and the flavor text at the top. In the mockup, it's hard to read, but reads something like "なにをおもとめでー？" or "What are ya looking for?". In the final it reads "どれにいたしましょう？" or "Which do you want?"

An extremely elaborate controller configuration screen was (wisely) cut down to a simple menu in the final game. The title text differs; the mockup reads something like "ボタンはいち" (Button layout), and the final's is "カスタマイザ" (Customizer).