This page details prerelease information and/or media for Harry the Handsome Executive.

Some of the first details on Harry come from Mixed Metaphor Software circa January 1997, before the game was picked up by Ambrosia. They include an early synopsis featuring pirates, superheroics, and possibly time travel:

An official screenshot was also released in this period. 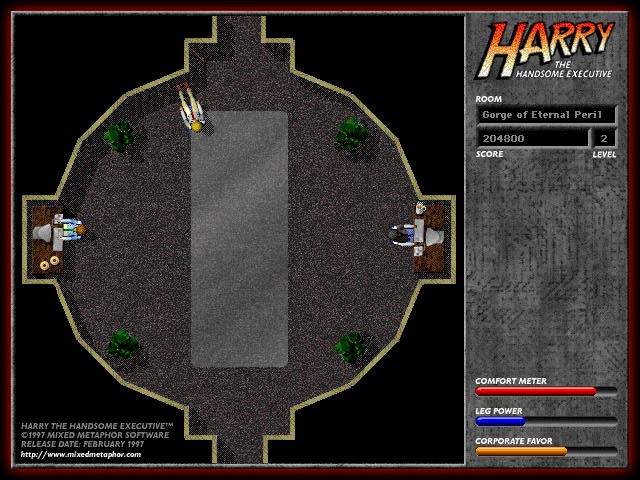 The "Gorge of Eternal Peril" (a Monty Python and the Holy Grail reference) has no analogue in the finished game, but the details of this build can be compared:

Another batch of screenshots soon followed, but only tiny JPEG thumbnails survived in the Wayback Machine.

The logo now has its shadow, but there's not enough detail to make out the status box fonts.

This area would be remodeled, with a runner, different obstacles, and a connecting staircase.

The final equivalent of this room is even bigger, but is home to only two robots, both gray.

The area where you find the gold stapler was much more dramatic rendered in 22.5° angles. Its adaptation to the chunky grid of the later engine left it barely recognizable.

The flame vents were originally going to be fed by overhead pipes, and (some?) areas underground had reddish floors.

Going by the final game, this starting point would have been the first appearance of the overhead pipes. It may have been designed to teach players that the piping can be passed under, by giving them nothing else to do.

The final adds a desk with a memo as an immediately visible destination.

This version of the World Editor had a very different sidebar interface, but the thumbnail is too small to decipher how it works.

This location has no obvious analogue in the game. 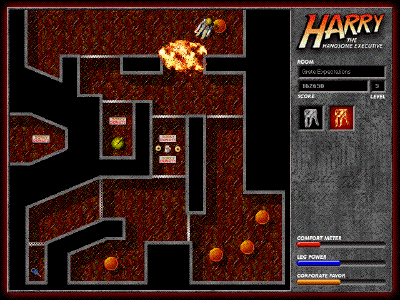 Ambrosia's first preview retained the hallmarks of earlier shots, including named rooms ("Grate Expectations") and complex layouts using 22.5° angles. The final game contains nothing that resembles this area. The fonts in the status boxes do match up by this point, though.

Besides the obvious change of color scheme, there are minuscule differences:

The editor itself changed too: 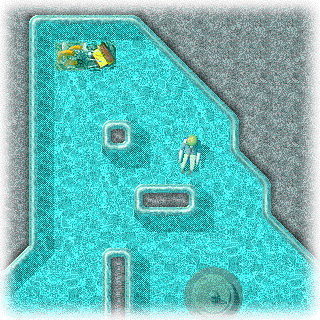 There's only one water level in the published game. It's made of concentric circles, with the innermost containing that round hatch as the sole exit. None of it resembles the area seen above.