This is a sub-page of Prerelease:Jurassic Park: Trespasser.

The following pre-release images are from Trespasser. Many of these images were released by DWI themselves over the course of development and feature static dinosaurs pre-posed, as opposed to actually being animated (dinosaur AI and animations weren't made until much later in development) and some of them were possibly taken from 3D Studio Max and the team made GUIapp as opposed to the actual game engine.

These aren't actually screenshots, but they're early sketches of locations planned for the game. Some of these seem to have just been used for the test levels seen in early images. 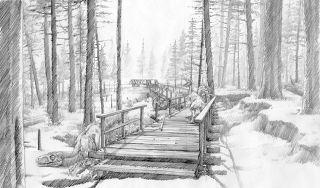 Some forest with a bridge that was probably the concept art for part of the Heightfieldtest map. At least one of the bridge objects based on this concept would end up in Ascent 2 in the final. 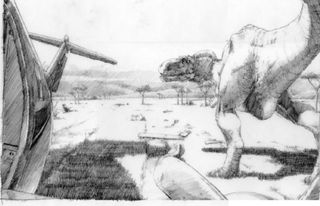 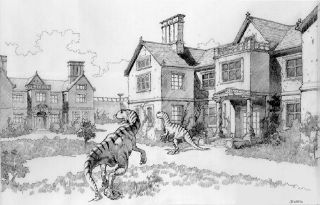 An early concept of the InGen town. 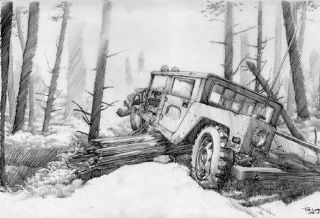 This vehicle was eventually modeled for Trespasser and can be found in early versions of Pine Valley. There's also evidence that it was in one of Trespasser's early test levels at one point.

Early on in development, the developers used these to showcase graphical elements from the game. for the most part, these were done in test levels rather than actual levels. One exception being one of the few images of the Plains level currently known. 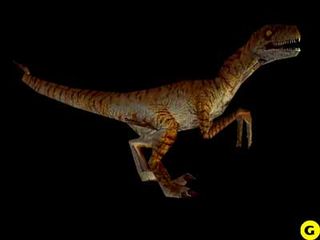 The early model for the Tribe A raptor in a 3DS Max render. 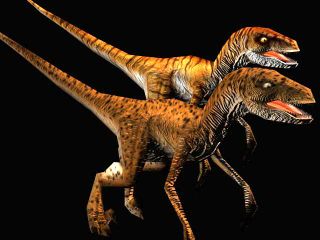 3DS Max renders of the Tribe A raptor and another raptor that's either a gender variant or one of the other tribes. 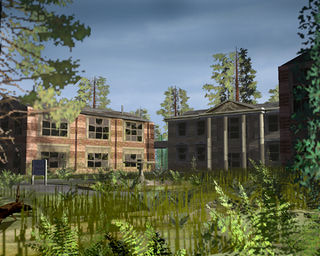 This was probably a backdrop used for showing off the game's objects or an early test level made only for 3DS Max. 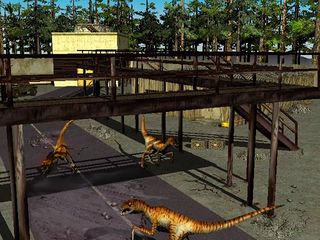 Another well known 3DS Max render that features the Geothermal plant from Pine Valley and three Tribe A raptors, all in the same pose. 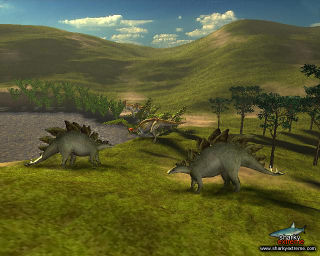 One of the only known images of the Plains level. A few others exist from when it was being tested in what is presumably the GUI app.

The rather infamous old trailer for Trespasser featuring the early test levels listed below as well as some other unknown ones. As is obvious, it was completely pre-rendered in what looks like 3DS Max. Among things shown, it features a soda machine with textures not seen anywhere else. 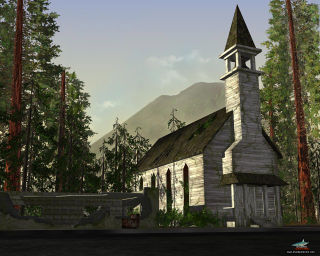 The Church from the InGen Town. This is clearly a test level probably being viewed in Trespasser's GUI app or the early game engine. The Tree growing out of the Church's roof mentioned in the 1997 walkthrough is present as well as an unknown half destroyed building. 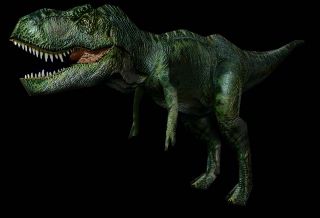 The Green T-Rex as it originally looked in high detail. 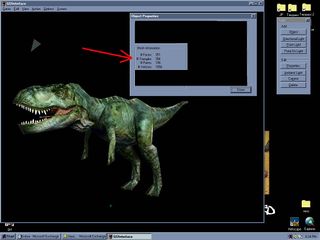 Same image as above but with the editor that the Trespasser developers used showing.

One of the earliest known test levels of Trespasser. It was featured quite frequently in early screenshots of Trespasser. The reason the level's name is actually known is because the heightmap for said level was found bundled with Trespasser's source code. According to Seamus Blackley, several levels were created for the marketing team. This is possibly one of them in addition to being a test level as evidenced aforementioned reasons above. 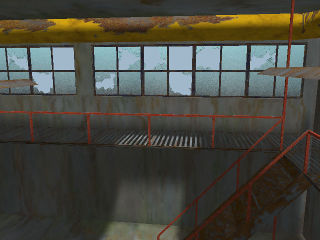 The interior of the "view" building. This interior was shown in the pre-rendered Trespasser trailer. 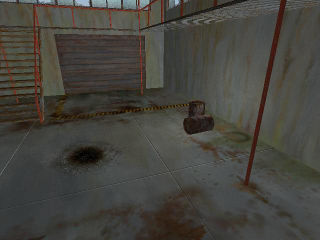 Another view of the interior. 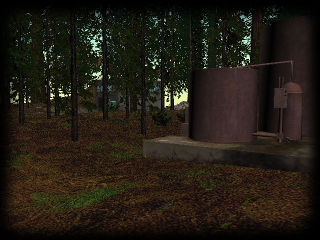 One of the parts of the exterior. 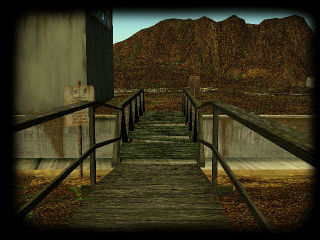 These bridges would eventually go on to be used in Ascent 2 in the final. 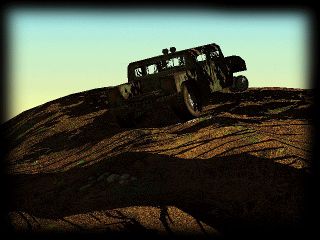 Another part of the test level. 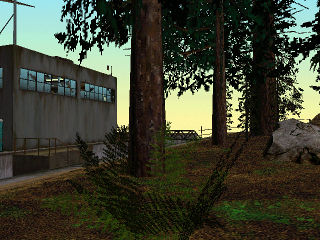 A good look at the "view" building's exterior.

Another map featured frequently in early screenshots and 3DS Max renders. Unlike the previous map, the name isn't actually confirmed because not as much of the heightmap was shown in early screenshots as heightfield test. It's instead based upon a heightmap found with the Trespasser source code which probably belonged to it. It should be noted that this and possibly other test levels were made for marketing as stated by Seamus Blackley. 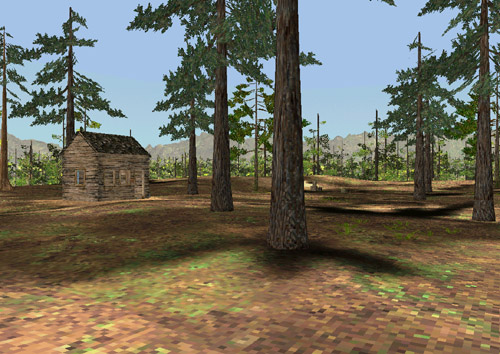 The shack in question. Also worth noting that the background seems to stretch for miles. This may have been done using a fake backdrop as the shackscene map that comes with the source code is a round shape, Perhaps early on they intended to use skyboxes instead of a triangle with the sky texture on it? 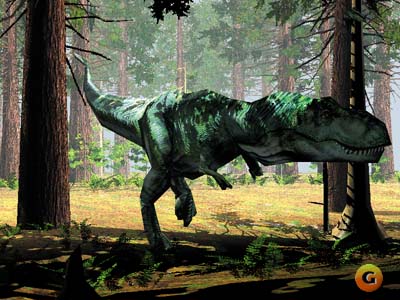 The lighter colored green T-Rex. Presumably this is also shackscene due to the general color and layout of the map. 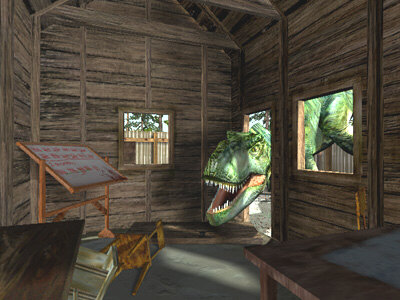 A screenshot of the inside of the shack with the Tyrannosaur posed to menacingly poke its head inside.

As evidenced by Build 55, actual work on the Beach level wasn't started until much later in development, so most pre-release images look very similar to the final. A video demonstrating water physics in the starting pool is also present, sans the rocks blocking Anne's way out to sea.

Since it was among the earliest of levels to be worked on, numerous pre-release images of it exist as do glimpses of it in the allgames network Trespasser trailer.

Only a handful of images seem to exist. Most of which seem to be from a build very close to Build 32.

Being among one of the first levels put into the actual game, it has quite a few early screenshots, many of which feature things from the E3 Demo's version of the level.

Since the level wasn't added until much later, many pre-release images resemble things from the Build 55-final era of development.

Only two confirmed images of the level are known to exist, though it's not known if they were taken in-game, or in the Gui App. It's not even confirmed the level was ever put in-game at any point. 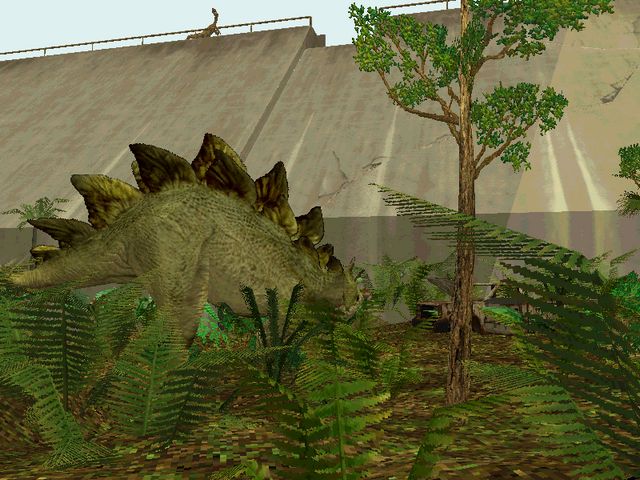 A lone stegosaurus wandering around the dam area. (no doubt pre-posed) The Stego is using the older model. It doesn't look like it's a 3DS Max render and actually looks like it was taken in-game. This could actually have been taken using Trespasser's GUI App rather than the game engine. (The GUI app can function like the game engine and be paused for real time viewing and editing.) Also of note, a pre-posed raptor can be seen on the top of the dam in the distance. Because of the pre-posed dinosaurs, this would have to have been sometime before AI was properly implemented. (it was only implemented in early 1998 according to documents that came with the source.)

Since it was one of the first few levels added to the game, it has images from various points of development.

Most of the existing images are taken from builds later than Build 55. One video of the Lab level demonstrating getting the purple keycard from the trash in front of the lab area exists.

Another level late in development. Most of the things featured here are in the final.

Yet another level that seems to have been pretty straightforward in development and was developed quite late (it was only getting started as of Build 55).

These images and videos are from levels that cannot be identified due to them either being dropped test levels, or areas that simply don't exist anymore in existing levels.

An old Teaser featuring a pre-posed raptor falling on the player. This was clearly a very early location and it appears in other images with pre-posed dinosaurs.