Minecraft was initially developed by Markus "Notch" Persson after being inspired by Infiniminer. The base code was developed in one week and was based on a cancelled game, RubyDung. The game would be tested in the TigIRC chat room on May 16, 2009, and public reception would be received the next day on the TIGSource forums. The game quickly gained popularity and features continued to be added to the game. After the game reached 1.0, Notch handed development duties off to Jens "Jeb" Bergensten.

The YouTube video Cave game tech test (original has been region-locked in all countries) was the first glimpse the world got of Minecraft, then going by the name Cave Game. This version has never been released to the public. The version shown in the video is from May 13th, 2009, but is an updated version of the first build of the game from May 9th, 2009.

Worlds are 256x64x256 blocks large, split into 16x64x16 chunks (originally 8x8x8,) and are made up of only two blocks (technically three blocks, but air wasn't listed as a block internally): Grass, which has the same texture on each side and only generates on tiles that are lit, and Cobblestone, which has a very aggressive texture. Lighting has been implemented at this point, but only has 2 light levels. "Caves" generate until a few blocks above the last layer of cobblestone, creating something akin to a ravine. Blocks cannot be placed, there is no hotbar nor inventory, and you can't fly, although you can destroy blocks. The only entity that exists is the player, which has no visible model and is 1.7 blocks tall compared to the current height of 1.8 blocks. 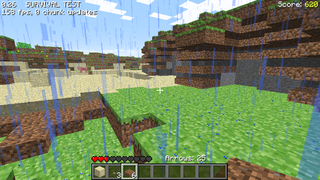 In early versions of Minecraft, Notch tried out dirt slabs, so they would be a half-block lower than grass and make the world feel more "smooth." However, this caused errors with dirt spawning in places like underground, leaving odd gaps. 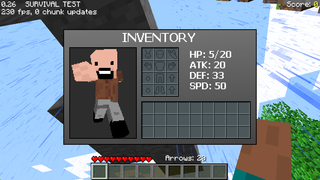 In a screenshot of what appears to be 0.26 SURVIVAL TEST, Notch made a mockup of an inventory screen; the armor slots seem to match up with Notch's unfinished game Legend of the Chambered, and although the "stats" section was implemented in some Indev builds, they served no function and were eventually removed. 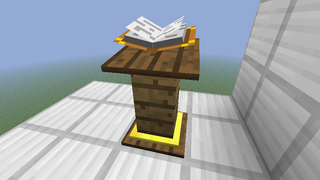 This would have worked just the way you would imagine, a stand for reading books. Dinnerbone worked hard on it, and got far into it, until he encountered numerous bugs and decided to scrap it. In 2013, on his Reddit AMA, he was asked if he would revisit it, and he replied he tried, but it was still buggy, and "didn't feel right".

Over 5 years later, the Lectern would finally be implemented into the game in Snapshot 18w44a, albeit with a drastic redesign, functioning the same as how it was described in the past. 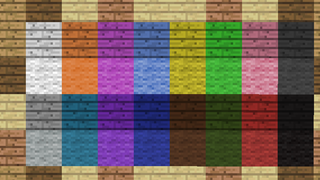 Dinnerbone posted a poll on whether or not he should add Dyed Planks to the game. The poll won, but Dinnerbone cancelled the idea sometime in development when he realised he had to add new slabs and stairs as well. The blocks were replaced with Hardened Clay. 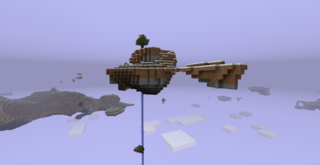 Notch was planning to add a Sky Dimension for the Beta 1.8 update, which you had a chance of going to when you fell asleep. This feature was never implemented, but in Beta 1.6 and Beta 1.7, data in the code for this dimension was present. With the use of mods, it was possible to access this dimension. In 1.0 it was replaced with the End. The End dimension is still referred to as "sky" internally.