This page details prerelease information and/or media for Pokémon FireRed and LeafGreen.

Several screenshots were included in development documents used to help translate the games showing an earlier stage of development.

Oak's sprite was redrawn in the intro. A couple of the hiragana letters were readjusted, most notably with the "て" (te) character. The gradient in the background is also smaller.

Screenshots featuring early sprites for the male playable character and the rival. Notably, the rival's sprite looks much closer to the original games's appearance. Also, the final game does not give any suggestions for the player's name, unlike Pokémon Red and Blue. Interestingly, in the documents screenshots, the names suggested for the player belong to Blue and the names suggested for the rival belong to Red.

Oak's pose changed slightly in the final game, with brown hair instead of grey, and different coloured clothes. The document image uses the test message テストです……… (This is a test).

The Poké Dude character who gives tutorials to the player via the Teachy TV key item has had his hairstyle revamped in the final version, with visible sideburns added.

A screenshot of the character reading a sign in Oak's lab reveals a few changes: As seen in the Fame Checker screenshot, Oak was originally supposed to have grey hair instead of brown. The Pokédex also shared the same design as the one in Pokémon Red and Blue.

The Kanto starters still use the backsprite from Pokémon Ruby and Sapphire. Under the "What will ___ do?" text, there is the string おや Ver200 meaning Parent Version 200.

Red's back sprite is using the overworld palette here instead of the final lighter palette. The sprite of Venonat in the documents is unique and has not been seen before. The options for "bait" and "rock" are also different. 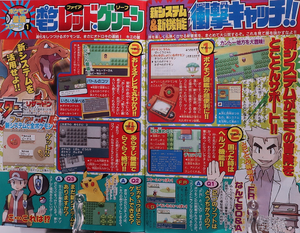 An issue of CoroCoro Comics Magazine from January 2004 shows several early things such as an early grass tile. It also shows an early bag sprite of the Teachy TV, with the sprite of Primo having a different haircut.