Pokémon FireRed and LeafGreen are remakes of the first two Pokémon games, Red and Green. Aside from the graphics and interface being upgraded to that of Ruby and Sapphire, the games received many new elements, most notably the Sevii Islands. 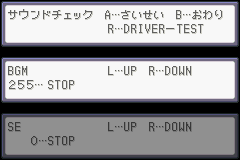 At least Japanese FireRed v1.0 has the Sound Check like Ruby and Sapphire, except it was removed in localizations this time around.

The misspelling of the word "stereo" in the Driver Test from Ruby and Sapphire was fixed in the equivalent of FireRed and LeafGreen as well as of Emerald, being now correctly spelled in katakana (ステレオ) instead of hiragana (すてれお), and the entry itself was also moved to the bottom.

There is data in the game for Sevii Islands 8, 9, 22, 23, and 24, as well as what are probably early versions of 6 and 7. Interestingly, all of their names have a different syntax than the final islands (ex. Island Eight is called Sevii Island 8 rather than Eight Island.)

The maps for Sevii Island 8 and 9 can be explored ingame by either changing address 02031DBC to 0x03 and 02031DBD to 0x34 or 0x35 while going into any building or using the right code from the following table. 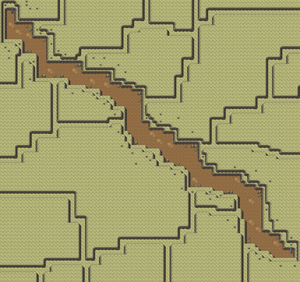 Several other maps, some of which are corrupted leftovers from Ruby and Sapphire, also exist in the game's coding. Some of these seem to be early versions of other maps in FireRed and LeafGreen or just duplicates. A complete list can be seen on Bulbapedia here.

Since key items cannot be transferred with a Pokémon, they're unused and most have no effect in FireRed/LeafGreen. The Mach Bike and Acro Bike do work, but act like the normal Bicycle. HM08 (Dive) also works and can be taught to Pokémon, but unlike normal HMs the move can be deleted freely.

Every secret base decoration and its associated data remains unused within FireRed and LeafGreen; descriptions for these items also remain.

A lot: Archie and Team Aqua, Maxie and Team Magma, Beauties, Cyclists, Hex Maniacs, Gym Leaders, the Elite Four and Champion, etc. While you can battle them in-game through hacking, their Pokémon data is gone, so they don't have any Pokémon to battle with.

Additionally, the backsprites of Brendan and May in battle with their send-out animations remain in the game, only able to be seen in normal gameplay by partnering with a player using Ruby, Sapphire, or Emerald in a four-player link Multi Battle.

Most overworld weather goes unused, except for regular fog.

Since rain no longer occurs naturally, the related battle message is now unused.

Multiple scripts starting at 0x1638EC in the US 1.0 version remain as leftovers from the first Braille chamber, with the alphabet inscribed in groups of three (ABC, DEF, GHI ...). A room similar to it was likely planned but then scrapped in favor of having a Braille table included in the booklet.

Starting at 0x1BE38B in the US 1.0 Version is the script for checking and prompting the player to use Dive leftover from Pokémon Ruby and Sapphire, along with the behavior byte used for dive tiles.

The graphics for Brawly, the Cameraman and the Rich Boy/Contestant have no palette nor frame data assigned to them, but the Running Triathlete does. This has been copied directly from Ruby and Sapphire, however using this in FireRed and LeafGreen results in the sprite being coloured differently as the palette tag ID (1104) now describes a different palette:

While not technically unused, this text requires cheating to be seen. If the player interacts with the TV on the ground floor of their house from the sides or back, the same text string from Pokémon Red and Blue appears. 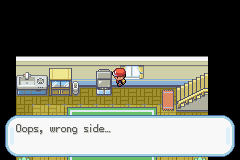 When the player attempts to use an item when they do not have any Pokémon, a normally unseen text string appears, returning from Pokémon Ruby and Sapphire. 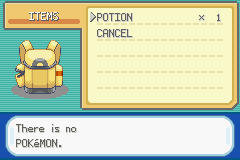 Hacking a TM move to be Bug-type will cause the disc in the TM case to change color accordingly, possibly suggesting that Bug-type TMs were originally planned to appear in Generation III (though it's a bright shade of yellow, rather than green as it is in later games). Colors for nonexistent HM types also exist, though ???-type has no color and defaults to Normal-type.

There is an unused sprite of Oak with a design that differs from the final release. The sprite and palette data are uncompressed at locations 3CA6DC to 3CAEFB in FireRed and 3CA5AC to 3CADCB in LeafGreen. Additionally, there is an unused function that draws this sprite on the screen similarly to how the Professor Birch sprite is drawn in Ruby, Sapphire and Emerald during a new game's speech segment.

The unused Timer Ball frame from Ruby and Sapphire remains unused for the same reason.

There are unused sprites for the player surfing that use a Lapras-like blob instead of the generic blob that ended up being used in the final release.

Within the male player's sprite sheet there are unused sprites of the player character facing diagonally holding rod-like objects. Possibly a unique animation for using the Itemfinder.

There are overworld sprites for a male receptionist right after the used Cable Club and Union Room receptionists. These graphics are uncompressed in location 38B728 to 38BA27 in FireRed and 38B708 to 38BA07 in LeafGreen. This character has an object event ID of 67, as well as frames and a palette defined, however the game never uses the ID at all.

A chiptune-like version of the MUS-ME-ASA (music 0100), the "Pokémon Healed" theme, which sounds like the original from Red and Blue. It has the label MUS-KAIHUKU in Sound Check and its ID is 0119.

For the sake of consistency, every Pokémon in every game is given a Shiny variant, and Celebi is no exception. However, because the only way to obtain it legitimately was through distributions, the Shiny version of Celebi was left unobtainable through normal means. This sprite may still be seen (in a lighter hue) if a Shiny Pokémon Transforms into a Celebi.

Like "standard" Celebi and many other Pokémon, the sprite is identical to that of Ruby and Sapphire, where it was similarly unobtainable.

Mareep, Aipom, Pineco, Shuckle, Teddiursa, Houndour, Stantler, and Smeargle were meant to replace the Zubat found in Altering Cave after using Mystery Gift. The event distribution was probably scrapped because these Pokémon can be obtained from Pokémon Colosseum or Pokémon XD: Gale of Darkness, as well as in Emerald on the extended area of the Safari Zone (except Smeargle, which is found in Artisan Cave instead) - despite the fact Emerald also has an Altering Cave with the same design and (lack of) implementation.

Technically, this is implemented by its map script reading a numerical variable and selecting from one of 10 encounter tables (all of which specify only 1 Pokémon).

The game does contain a built-in implementation of an Altering Cave event, which attaches to the deliveryman in the top floor of the Pokémon Center and sequentially switches the selected Pokémon then displays:

This however may not necessarily be indicative of how an official event would have worked.

Some Pokémon, when found in the wild, have a chance of holding an item. But some of the Pokémon that have assigned held item data can only obtained via evolution or other means, so their potential held items are never seen during normal gameplay. Notably, Kanto and Johto Pokémon in FireRed/LeafGreen use a different list for held items then what Ruby, Sapphire, and Emerald use, as well as all future games.

The movement table, located at 3A64C8, contains the directions the player or an NPC must move in. However, after the first five entries (steady, down, up, left, right), four more follow, resulting in diagonal movement when activated. Using them results in some glitches with warps and map rendering. It should be noted that the games feature buildings with otherwise strange diagonal corners, contrasting with the buildings of the original games.

This feature was not implemented in any final version until the X and Y releases.

Some data suggests wild double battles were originally planned for this generation, but were delayed until Generation IV. For example, a string "Wild [buffer1] and [buffer2] appeared!" is located at 3FD2BF, and setting only bit 0 in the battle type flag at 02022B4C in the RAM results in such a battle, if used at the right moment.

As with the previous feature, it isn't finished and may result in some bugs.

Near the build date info is a plain-text string showing the build path and a few build variables. The Japanese 1.0 revisions use relative paths instead of the full paths, both English revisions (1.0 and 1.1) have this line in full, and the Japanese 1.1 revisions no longer have this information.

These changes apply to the English version of the games.